Yesterday we discussed the importance of beating, and the beatability of, New Jersey Governor Jon Corzine this November (New Jersey having its elections on odd-numbered years). Today, Lawhawk takes apart Corzine's latest "solution" to New Jersey's budgetary mess, which basically amounts to one deception on top of another. Here's a few ideas for substantive budget cuts "without breaking a sweat," which gives you some idea of the lameness of our governor's management of this fiscal disaster.

If you live within driving distance of Trenton and want to get involved, the Christie campaign has organized a demonstration of support for its candidate at the venue of this morning's Republican primary debate with Steve Lonegan. For all I know, the Lonegan campaign is doing the same thing, so show up either way and you'll meet a indefatigable band of New Jersey Republicans who actually have some hope of winning this year. Address: 44 S. Clinton Avenue, Trenton. Time: 10:00 a.m. this morning. If I go (and I probably will), I'll be the middle-aged dude in the TigerHawk t-shirt.

MORE: Here's a nice argument in support of Chris Christie on June 2.

UPDATE (11:30 a.m.): Well, I went to the "rally". As you can see from the picture below, only a few hundred people turned out (although it is possible that in my enthusiasm I have miscounted -- the official police estimates are not out yet): 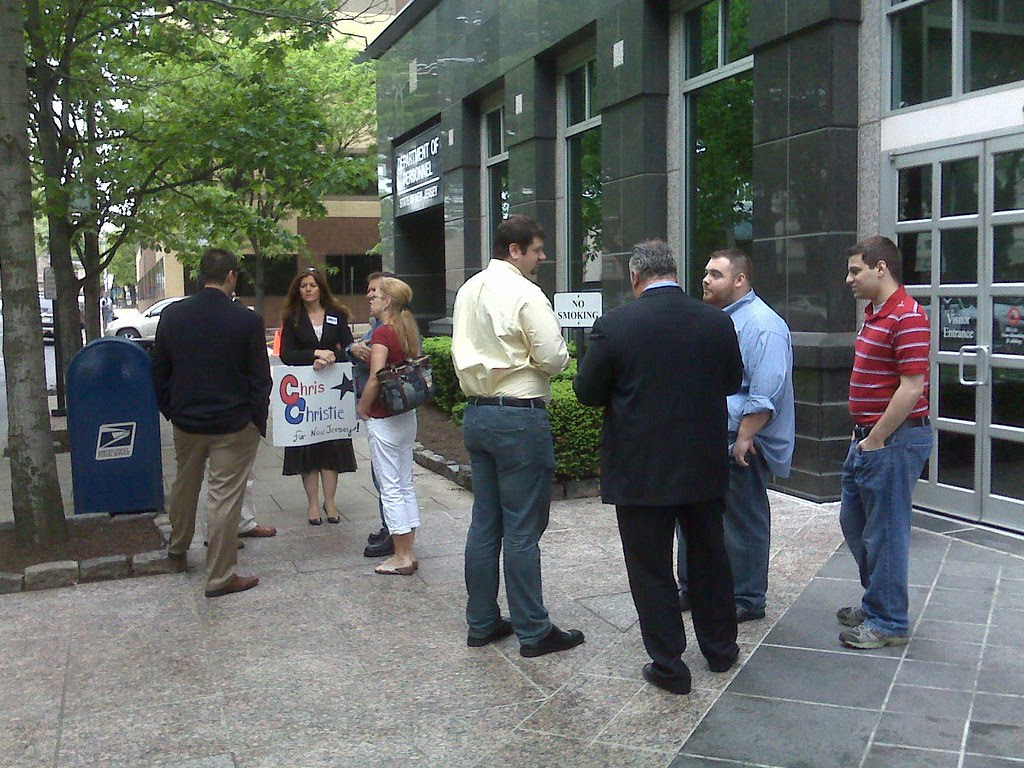 Then the candidate arrived: 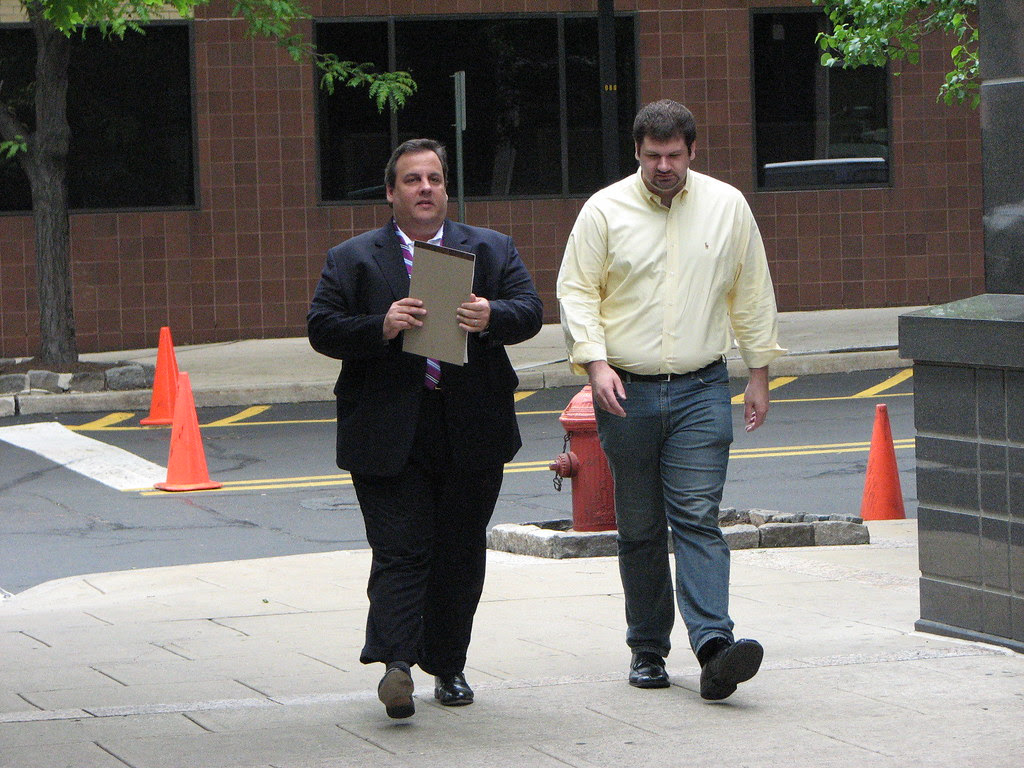 The Christie campaign needs to work on its street operations. I showed up wearing a TigerHawk t-shirt with a camera around my neck, having put up this post several hours before the event and having mailed the link to the campaign's press office. I put on a Christie sticker and asked for a bumper sticker, which they had to retrieve from a car around the corner. Nobody asked my name, what I was doing there, why I was taking pictures, or whether I wanted to work on the campaign or give money.

In my day, I would have been all over me, asking for name, rank, serial number, and wallet size.

A most unflattering photo! It appears that the guy on the lefts tie is not tied but just hanging around his neck, maybe the wind is blowing it? A dumpy little dude. Maybe he could have invited Miss California and he would have gotten more people to attend.By the way, The tea party I went to here in small town Texas did not ask for names, addresses, etc. Poor politics.

As much as I despise the wingnuttery (as much as one can be so in a Blue State) at least you were more comfortable in a T shir as I was in an academic robe, hood, tam down here in the humidity of DC (and rain).

Interesting. Within the last two weeks I've read an account of a Hillary Democrat attending a Republican event (at HillBuzz - love that site) and an essay on "Why more women aren't Republicans" (at Slate's new "feminist" XX site). Although HillBuzz talked about loaner pants (he spelled it "loner" through the whole post which made an already funny recounting even more hysterical) and XX talked about boring name-dropping, they were both really talking about "clueless". As HillBuzz put it:

I think it boils down to the fact that Democrats at large believe they can’t afford to lose a single vote or alienate a single person, while Republicans at large don’t seem to believe that one or two people here or there, no matter how maligned or slighted they feel, ever really matter. ”It’s just one person, mad about pants. Shouldn’t have worn jeans!”. But, those one or two people add up, even if they are people like me who took a whole day off, with lots of other stuff that needed to be done, because I was asked to be part of this listening tour for Steele...

I believe Lonegan is the clear choice in this election. Why should voter vote for a Republican that acts like a Democrat when they get the real thing?

Ideology aside, the general public relates to Lonegan and many of his supporters see him as the last hope for the state that is #50 in tax climate. Many see Christie as one more politician and their tax money will simply be going to a different group of people.

One question the Christie supporters constantly put to Lonegan supporters is: "who will you vote for if Christie wins the primary" in order to question their loyalty to the Republican party. In actuality most people could not care less about loyalty to any political party and those people will be voting for PA, NC, and FL and paying 0% NJ tax.

You've got to be kidding me. This guy looks like a beached whale with two feet and four chins. He makes Rush Limbaugh look trim. He's going to go over great with young voters--not.

Sorry, but a man who lacks the self discipline to maintain his BMI to something south of "morbidly obese" is NOT a good candidate for an executive leadership role. Good luck putting that fat cow in the Governor's mansion.

The Christie campaign definitely needs to work on their game. I got solicited by their Facebook guy to come to a "meet and greet". I replied that I'd be there, with a camera, and would post photos and a blurb on my blog.

The invite said to drop in "anytime" between 1 and 3. I arrived at 2:15. After standing around waiting for one of the worker bees to notice me, a flunky in flip flops laughed and said "you just missed him" when I asked if I could have a minute of Christie's time.

At least they had bumper stickers to pass out. No lawn signs though; they were "on order".