The centerpiece on the tables at the Norske Nook restaurant in Rice Lake, Wisconsin: 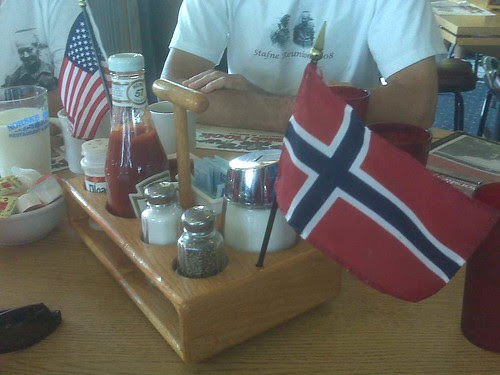 I had the smothered omlette lefse wrap, which is really just a Norwegian breakfast burrito. Great stuff, but a breakfast burrito nonetheless. We also bought a couple of pies for the family reunion this afternoon.

A former colleague of mine who is of Wisconsin Norwegian (and German) extraction once convinced me to try lefse that was send to his office in DC from the family back in cheesehead land. We slathered it with butter. It was not a memorable experience. If I ever see the stuff again, maybe I'll try the burrito approach.