The data on weekly unemployment claims does not bode well for the Donks. Or the rest of us Americans. Eight months of stagnation at this stage in a "recovery" is very bad news. 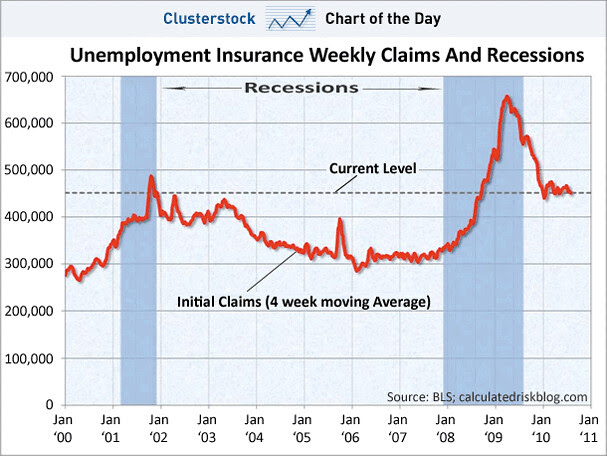 It would be surprising if unemployment went back to normal this soon in the cycle. At least it doesn't seem to be rocketing up.

Can you say "flatline"

1 a : to register on an electronic monitor as having no brain waves or heartbeat b : die

2 a : to be in a state of no progress or advancement b : to come to an end

It will only get worse. Here in CT the hospitals are starting to lay off staff due to the cuts in Medicare/Medicaid reimbursement. Health Care/Biotechnology was supposed to be the savior for expensive blue state economies.

Anon Attoney here. This post by David Goldman explains everything one needs to know to understand why unemployment will remain high until Obama and the Democrats are ousted from office:

Vox Populi: "You Were Warned writing that

"...that total U.S. credit market debt is not 375 percent of GDP, but is actually approaching 400 percent."

"Debt can be devalued by paper, but debt cannot be devalued by debt. It must be deleveraged; Australian economist Steven Keen has noted that the initial deleveraging process in Australia has already begun at a faster pace than it did in the 1930s; it has not even started yet in the United States where debt to GDP is still rising. But it will. And though it's true that a printing press can print unlimited quantities of dollar bills, not even Ben Bernanke's magical printing press is capable of printing buyers of U.S. Treasuries."

The conclusion of that writer is that we are just in the beginning stages of a Great Depression 2.0 and that many people will take about a year to recognize this reality.

Look on the bright side. If these statistics light a fire under people to vote these incompetent criminals out of office, it will be a good first step.

Then all we will have to worry about is the lame duck session.

"Happy economies are all alike; every unhappy economy is unhappy in its own way"

I have no crystal ball, but I've long thought that we've been heading to a cross between Peron's Argentina, Japan's deflationary lost decade, and post-Empire Britain. In the end, it'll be uniquely American.

Obama is Peron without the gold braid. Argentina started with money in the bank, post WWII. Peron pissed it away with grandiose plans for nationalized industries (including energy and autos) and guaranteed "rights" for everyone. Leftists say it failed because Peron didn't go far enough.

Despite its democratic machinery, Japan is (and always has been) a Borg state. When faced with over-leverage and too much debt, it chose a path that favored the old and the Establishment at the cost of stasis.

Post-Empire Britain wound up an over-extended debtor. While WWI was a war of choice for Britain, WWII wasn't -- so I have some sympathy. Post 9/11 we should have kept our powder dry, as I've ranted about here before.

But the future isn't written.

Presently we’re only "Chapter 11 Reorganization" broke, which means it’s fixable. We're still capable of being a going concern. But lots of entrenched interests would need to take big discounts.

The fiscal numbers involved are too big to think that we can solve this with normal bargaining between Democrats and Republicans, certainly not with Hopenchange as broker.

If we don't fix it, we'll wind up "Chapter 7 Liquidation" broke. That'll either result in an even bigger Borg state, or our getting whatever's behind door number three. We've got five to seven years to do this I expect, maybe less if there are adverse exogenous developments.

The Republicans will once again get a seat at the table after November. Then they'll have to figure out to use it.

I don't write as a partisan. I'm just a concerned citizen and father with a half a clue about what's going on.

"vote these incompetent criminals out of office"

It was the last lot of incompetents who engineered the unsustainable boom. Not only in the US, but the Labour government in Britain.

The new governments that have replaced them may be equally incompetent, but if so you will need a new political party to replace them with something better.

One of the causes of WW II was the dictators perceiving the economic incompetence of the democracies, and gaining confidence. There was a strong feeling that "dictatorship works", a feeling which is shared I think by Ahmedinejad and Chavez.

I despise that 'war of choice' has become an accepted turn of art. It's a completely artificial phrase, catapulted into the mainstream by modern liberals to poo-poo the Iraq war. *Every* war is a 'war of choice.' All of them. Surrender and acquiescence are always options.

And how do you not call WWII a 'war of choice' for Britain when they are the ones who declared war on Germany, and not vice versa?

I am confused that you would refer to Barney Frank, Chris Dodd and Bill Clinton as "the last lot".

The Republicans did their amateurish share of spending like drunken sailors, but the financial meltdown was created by professionals.

The SAME one's who are still creating financial legislation to be sure that what they THEMSELVES did during the last decade never happens again.

Of course, that is a fabulous ruse as well.

The obvious solution is to put in a NEW set of potential criminals every few years...and watch them more carefully.

I believer that will be done.

Re: War of choice

They all involve some degree of choice. Dawnfire82's right.

Re: Choice in defense spending

I'd bet Dawnfire82 could budget a better military for half the cost, if he had a free hand to do so.

If we don't figure out how to downsize our federal government sensibly, we're going to become a centralized Borg society of some kind or collapse. Our current course is not financeable, hence not sustainable by a primarily private economy. Some may welcome life in the Borg, but it's un-American to me. "We have met the enemy, and he is us."

We have an annual structural deficit of at least $1 trillion. How would you close that without touching defense/homeland security?

Obama is looking ahead to the Republicans gaining control of Congress, and then the Deficit Commission reporting in December. If there's total intransigence on the Right, Obama will use that to his advantage.