Princeton Obama supporters trespass and vandalize: But of course, this means war

Regular readers know that last weekend I put four McCain signs in front of my house, one facing the road and three others perpendicular to the road at roughly 50 foot intervals. These are the only McCain signs I have seen in Princeton, but there are Obama signs proudly displayed on most blocks in my neighborhood. You cannot get to my house without running a gauntlet of them.

Sadly, even my four McCain signs were more than the local Obama supporters could endure. Twice in the last week somebody has come on to my property* and tossed two of the signs -- those that are not easily visible from our front door, so we know the moonbat is a chickenshit -- away from the road into the undergrowth. The first time he or she left the signs intact so I put them back up. This time the presumptive Obama supporter or supporters (for all I know there is more than one) tossed away the metal posts so I could not put them back up again. Fortunately, there are more where that came from.

Here are camera-phone pictures of the awful aftermath. 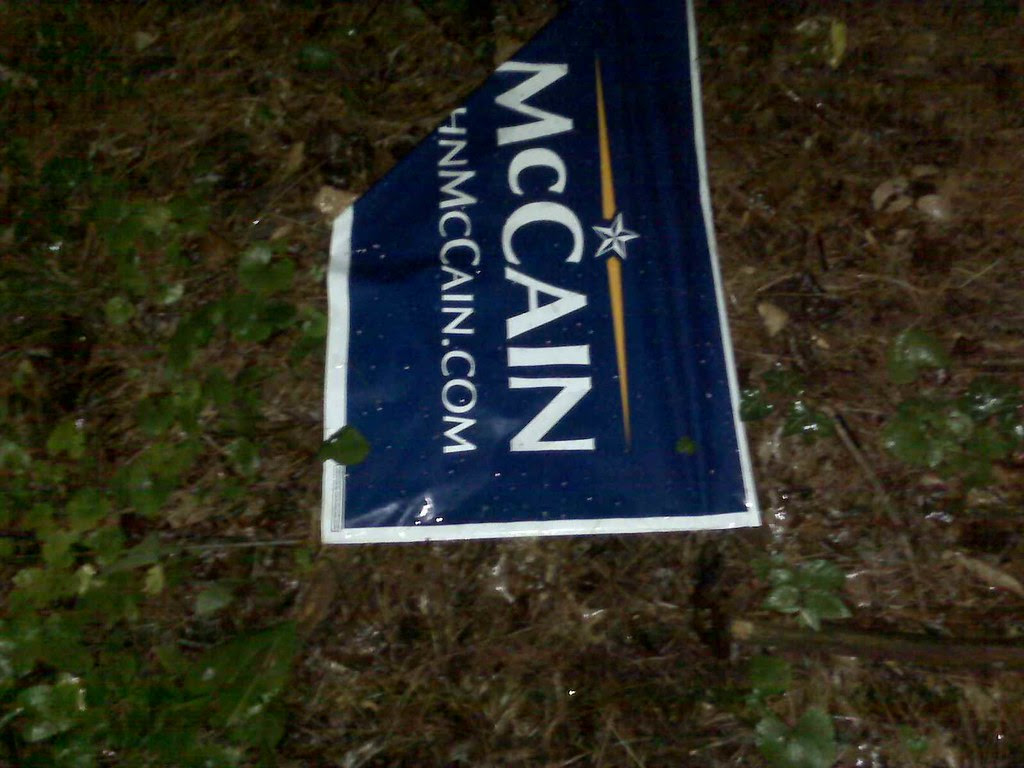 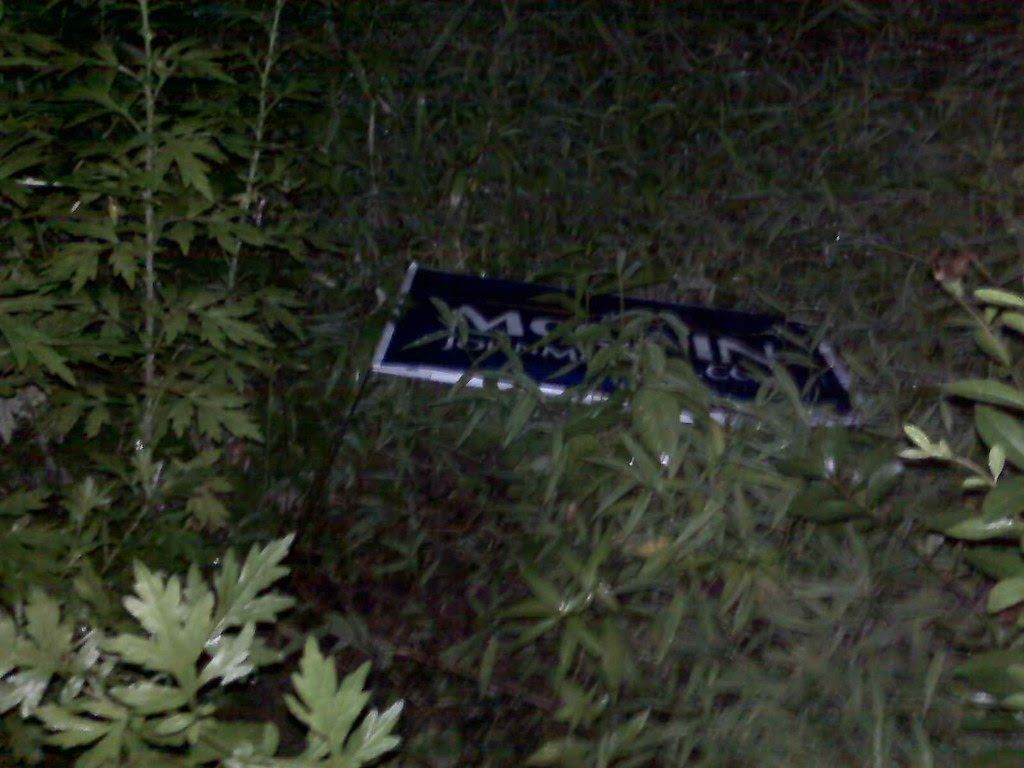 As usual, the Son had a great idea -- replace every sign that is tossed away with two signs so, like the hydra of lore, "McCain" just keeps coming back. Awesome! I have ordered 25 more signs, and will strike back after we return from the Adirondacks.

This could get nasty.

That kind of crap speaks volumes about the Left.

What else did you expect?

The Democrats need the rigid metal posts to prop up all their dead voters.

Perhaps you could coat the metal posts with sodium nitrate (brown stain on skin). Or Red Hot balm. Etc.

This also sounds high-school prankish. Like papering someone's lawn. Maybe your son could ask around.

it is imperative that you learn this miscreant's identity and attack his lawn -- mercilessly -- with dandelion spawn. if he has an in-ground pool, then you know what to do there, as well. we await your after battle report.

the honor of your blog is at stake.

Dude, a little advise, invest in a pitbull.... problem solved and some joy brought into your life... :)

Just make another sign that counts the number of times your signs have been vandalized. People will get the idea.

Put up more, and post the tigerhawk minor in the bushes with a US-made louisville slugger. Nothing like a permanent limp or pending ACL reconstruction to discourage future petty crimes. Or at least scaring the every lovin' sh*t out of some punk or college snot, after you liberate his ID.

After all, it's not the $1 sign that's the affront, it's the trespass.

I still want to print up my own "Hope" bumper stickers, with "I" and "John McCain kicks his ass" wrapped around the word No moonbat could help look at.

I had a Bush bumper sticker on my car vandalized a couple years ago while it was parked in Plainsboro. The Princeton nuttiness sometimes spills over into the surrounding communities.

This sounds more like an overemotional high schooler who can't stand to see someone around them supporting a Republican - it sounds like a mission for the TH teen.

How about running a non-lethal electrical current through the signs? Or wet paint ... or crazy glue?

My "Army Veteran for McCain" shirt remains in the drawer, ready to be unleashed if/when Obama supporters begin to wear their shirts at the gym. I will refrain from initiating the hostilities.

The same thing happens to Obama signs in Appalachia, but what can you expect from...

(you finish the sentence)

They don't use those metal stakes to prop up dead voters. They stick them up their asses as a substitute spine.

People, please. The vandal is just trying to save the planet.

wipe poison ivy all over them

Ah, that's NOTHIN'. You shoulda tried to find one single Forrester sign here in Hoboken during the gubernatorial campaign. Just one, in a square mile.

If it makes you feel better, under the stewardship of officials set into office by the Hudson County Democrats, the city has ground to a halt due to illegal overspending. Hoboken is now under state control, which I realize is very much a fox watching the henhouse sort of deal.

If you ask around, you would not have too much trouble finding people who blame Bush for this, either. That's the reality-based world around these parts.

Never mind getting fancy. Just get a can of roofing "rain patch" and put it on the posts where they would grab them.

It's black, sticky and hard to get off.

Either they'll refrain from further vandalism, or they'll be back with a vengeance.

In 2004 I saw a guy with mexico license plates stealing hundreds of Bush signs from all around and putting them in the back of his truck.

No matter how much I've wanted to I've never defaced an Obama sign.

Not that I officially condone this, but I think SCOTUS recently gave you the OK to shoot those a**holes. What are you waiting for?

I would never touch or deface an Obama sign (or any OTHER sign on someone's property -- and it's all SOMEONE'S property) either.

Realistically, it's only one person who's tearing down the signs, you can't blame all Obama supporters. (For example, my mom's disabled, she's gonna leave your signs alone.)

But you really should make it more amusing for the perps. You've got lots of time before the election.

Pick up a burglar detector and a video camera. Put the signs up where you can photograph the incident from inside. Wait. Post the results on the web.

Well just to remind everyone that this happens on both sides, a man near me had the same thing done to his Obama sign. He proceeded to attach it to a wooden spike and drive it into a tree stump in his yard. Do you have a tree stump? :-)