Supporting the terrorists on the Fourth of July 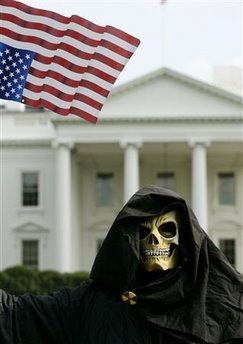 Reuters caption: An anti-war activist dressed as the Grim Reeper demonstrates in front of the White House in Washington July 3, 2006.

Of course, the press reveals its politics when it characterizes these demonstrations as "anti-war." These activists are not calling for the end of war. One can search through their demands from dawn until dusk and find no requirement that al Qaeda lay down its arms, that the Taliban recant, that Iran stop funding terrorists, that Hezbollah abandon its coercion of Lebanon, or that Hamas give up its ambition to destroy Israel. They are calling for the end of American participation in the war.

Conceding purely for the sake of argument that there may be excellent geopolitical arguments in favor of immediate withdrawal from Iraq and Afghanistan, they are not anti-war arguments. Unilateral withdrawal will not cause the war to end, or the killing to stop. It will simply accelerate the switch from military to civilian targets. Indeed, there is an excellent chance that the aggregate killing will increase. Whatever the objectives of those who call for American withdrawal, they do not include sympathy for the millions of Muslims who are resisting the jihad's perversion of their religion and their society.

No, anybody who describes these activists as anti-war is either lying or (at best) uncritically republishing propaganda. These demonstrators are pro-jihad. They will deny it, but that is what they are, and they prove it with their own propaganda. And, I think, some of them unconsciously reflect this in the costumes they choose. They don't release doves, or dress as Quakers, or celebrate liberty. Their icons evoke death.

Therefore, if any of these activists actually starve themselves to death in this pro-terrorist hunger strike, I will consider it to be suicide in service of the jihad, and mourn precisely in proportion to my concern for others that have done the same.

Who the heck is the Grim Reeper? Surely they can't mean the Grim Reaper? After all, I thought they had all those layers of editors to make sure this sort of thing didn't happen...

If you're going to make me spit out my coffee first thing in the morning, the least you could do is warn me next time :)

As one of my law teachers once said in a vastly different context, I see yet another American is availing himself of his Constitutional right to make an ass of himself.

But attacking the status quo is so much funner than actually protesting the real bad guys! You gotta rebel against the system!

I bet that this guy probably thinks that the US either deserved 9/11 (Ward Churchhill style) or that Bush planned it(European style) as a means of invading Iraq.

I suspect that most of the 150 hunger strikers won't keep up their fast for more than a couple of days, if that long. I bet many of them won't last 24 hours. I may be wrong, but I imagine that most of them are just that shallow. Their principles will guide them only so long as it entails no real pain for them.

I hope someone will keep tabs on the entire group so the early shirkers can be filmed and embarrassed for not lasting more than a day or so. It will expose them for the posturing fools they are.

It's hard to understand the thinking behind such a nasty individual. I think I'll stick with the conservatives. They're happier, for one.

It's hard to understand the thinking behind such a nasty individual.

You're assuming that they're actually thinking. Everyone knows that the human brain is composed of several parts, and that each part has a different function; but specific to this argument, let's just go with the left and right hemispheres for a minute. The left side of the brain, (ironically), is where logic and reason reside, and the right side is where emotion and creativity reside. If one were to do a comprehensive brain-activity study on lefturds compared to conservatives, one would find that conservatives are mostly left-brainers, i.e. logical thinkers, and lefturds are right-brainers, i.e. emotional and creative thinkers. This is aptly demonstrated by the lefturd in the picture above, who is most likely a failed drama club student who could never understand why the world doesn't work the way they want it to, and is determined to piss in the punch bowl to ruin the party for everyone else. People can say what they like about freedom of speech, but these people are just mentally unbalanced and should be medicated or locked up.

The "pass the fast" notion is particularly amusing. Blunts the edge of this form of protest a little, no? On the other hand it does ensure the longevity of the picnic, so they've got that going for them.

"Starve themselves to death"

"I suspect that most of the 150 hunger strikers won't keep up their fast for more than a couple of days, if that long. I bet many of them won't last 24 hours. I may be wrong, but- "

You're not. They are working in shifts. They "starve" themselves for 24 hours and then they tag out to another batch of moonbats. Seriously.

Maybe it's just me, but shouldn't there be a list or something of all those who have starved themselves to death protesting one thing or another in the US? I mean, I've googled the hell out of it, and I can't find the list. Surely there must be a long list of dead people because a lot of the things they protested are still going on.

Wait a minute. (Bzzzzz, bzzzz, bzzzz. What? What? You mean NONE of these fat bastards has EVER actually died for their 'beliefs'? What kinda chickenprotester are they?)

Scenes from the White House

John: I just read this story on the interweb. It looks like we could be in trouble with the Iraq War and the larger War On Terror. Here, look... [hands a printout of this news story to the President]

John: Don't you see? Now that the Hollywood elites are going on a hunger strike, the American people will surely call for immediate withdrawal from Iraq, regardless of the long term implications of such a rash move.

W, continuing reading: John.... look a little further down this story... read these three paragraphs for me, would you? [hands the paper to John]

'I don't know how long I can fast, but I am making this open-ended,' said Wilson.

Other supporters, including Penn, Sarandon, novelist Alice Walker and actor Danny Glover will join a 'rolling" fast, a relay in which 2,700 activists pledge to refuse food for at least 24 hours, and then hand over to a comrade."

W: Listen, they're not talking about going on a hunger strike... just forgoing their bon-bons for a few hours. If this is how serious they are, then I don't think we need to worry much, right? And Hell... Susan could use a break from them anyway, you know what I mean?

Sure, he's got a mask, but that doesn't cover the stink of patchoulli and unwashed body odor.

I like the big puppet-heads better. Moonbats must have big closets, for those big puppet-heads. If you own rental property, don't put big closets in them. Put gun racks instead. Then no Moonbats will rent them, and you'll save money on renovations if they move. Moonbats like to move a lot. That's why they support "Move On.org". I think "The Grim REEPER" is "On the move" too. See how simple this is?

Pharmacy from foreign is the perfect resource for people to get their drugs without any hassles or awkwardness. We work hard to make sure you save money every time you shop with us. At our online store, you pay less and get more.