New Jersey continues to be the most miserable state in the country to start and sustain and grow a business. From the very interesting December 2008 report of the Small Business and Entrepreneurship Council: 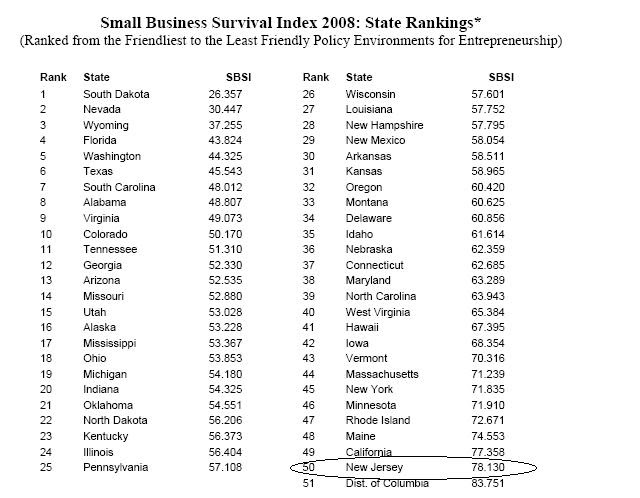 The only jurisdiction that is worse than New Jersey for small business is the one that is controlled by the United States Congress directly. This is not surprising; the Garden State has raised taxes so much since 2001 that it has erased substantially more than half of the notorious "Bush tax cuts" for those of us who earn enough to hit the bogey. Barack Obama claims that he just wants to tax "the rich" as they were under Clinton (a bit more, actually), but the fact is that in many states, most of which are controlled by the President's political party, a reversion to the federal tax brackets that prevailed in 2000 will result in a very significant aggregate tax increase over Clinton-era levels. Ignoring that, and its consequences for business formation and job creation, is intellectually dishonest.

Of course, there is at least some evidence that people have voted themselves into these results. Here's the same chart, marked by me (using my kindergarden-level graphics design skills) in the traditional red-blue color scheme to denote the 2008 presidential election result... 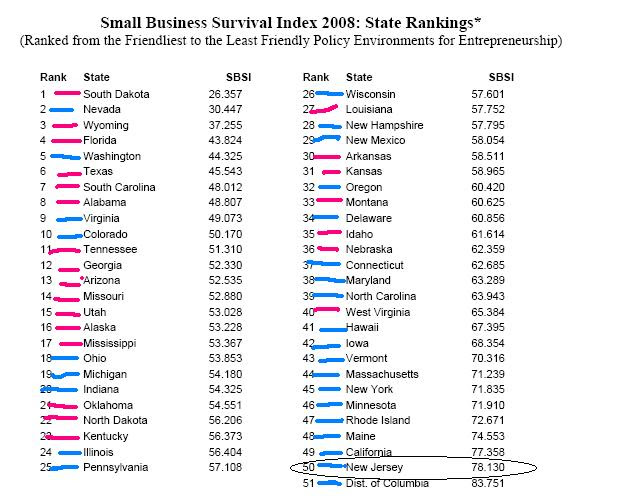 It is almost surprising that Barack Obama still claims to want to help small business, given the revealed attitude of his constituents.

TH - As I looked over the list initially, I too did the Red vs. Blue thing before I saw your second graph. This would be even more stark, had you gone back to the 2004 or 2000 Presidential election, especially since G.W. won Nevada both times and that is generally a GOP state. The same holds for VA, IN and I believe CO went for G.W. both times.

On the reverse side, I believe WV went with Gore and Kerry in those respective races. If I am correct on this, the GOP would have had 18 of the top 20 and would have only had 6 in the bottom 25.

It would be interesting to see the resulting GDP and tax revenue growth of each of these states over time. The emphasis should be on growth to see which states are best prepared in the new economic world.

So, TH, when you become CEO of your medical instruments company, I take it that you'll be moving it to friendlier climes? Alternatively, showing this data to the board now with a suggestion of places to go could get you a lot of attaboys. I'd suggest Reno, Nevada, if it weren't for jerks like Harry Reid and his clan of thieves. Somewhere in Texas might be good too, and Texas is more stable. South Dakota and Wyoming are too cold and remote and Florida's too crowded.

We moved our national distribution center from Exit 8A to Reno four or five years ago, so good thinking. We have also moved a lot of manufacturing out of state. The truth is, New Jersey is not a bad place for a medical device company headquarters because there are so many device and pharma companies nearby (J&J, a source of many employees, is right up the road). Businesses that do not move stay for a reason. And I enjoy living in Princeton notwithstanding the cost. But the broader point obtains -- New Jersey really needs to get its act together or it will be very hard to recover employment growth over the long run.

Note that every state north of Virginia is rated 25th (Pennsylvania) through 50th (New Jersey). That's right, West Virginia, Maryland, Delaware, etc. all fall within the bottom 25. I'd bet that all have a ton of underfunded pension liabilities for an aging public employee base that state legislatures will have to deal with. As a Pennsylvania, I'm a little surprised that the Keystone State ranked so high, at #25 (my guess is that if you removed Philadelphia, PA might rank higher). I've joked with my spouse that we might want to consider retiring in Texas, Virginia or Tennessee, and you've given me data to back it up.

It used to be that people fled NY to NJ, now that NJ has become what NY used to be when people started fleeing, it doesn't take a crystal ball to see the future.

washington, nevada, colorado and va. are all really purple states... thus the first blue state is 18th, which is a virtual split and Indiana which is also a typically red state. I am very surprised at Michigan, and do not trust the chart for that reason

anon 6:28 pm makes an interesting point about Michigan. It would be interesting to see how this 'business friendly' chart would compare to a state by state unemployment chart. One thing the chart does show is that being business friendly won't necessarily take you very far, otherwise Sioux Falls would be the Hong Kong of the USA.

Centrist: Texas is a great place to live, insofar as there is plenty of friendly people, good food, and no income tax. Be prepared for culture shock though; it really is like a whole other country, with its own outlook and its own problems.

"Economic freedom around the world remains on the rise but it has declined notably in the U.S. since the year 2000, according to an authoritative study released today by the Cato Institute and Canada's Fraser Institute.

"In 2000 the U.S. was the second-freest economy listed in Economic Freedom of the World, an annual report written by James Gwartney from Florida State University and Robert Lawson from Auburn University. This year the U.S. has fallen to 8th place, behind Hong Kong (ranked in first place), Singapore, New Zealand, Switzerland, the United Kingdom, Chile, and Canada."

Dawnfire82 - the idea that Texas is another country is a bit over the top. I just moved here from PA, and I was raised in Buffalo, went to school in Boston, worked in LA, Houston, Chicago (also went to school there too), Minneapolis and Seattle previously. Each of these places has its own uniqueness to it, however none have quite the same frontier pride and eternal optimism that Texas does. For a conservative, people here live their values and do not have to hide it. I find it comforting when people say "God Bless" or "Merry Christmas" and they are not whispering it or looking over their shoulder. In many respects I feel that the Texas I now live in, is the America I was raised in the 70's and 80's, in a middle class mostly first generation American neighborhood.

Lastly, the business climate here in Texas could not be more business favorable. These guys "get" that a government's first job is to create an opportunity for the individual to be successful, not for government to be rulers.

Just remember that the T.V. show Dallas was made in the 70's and it was Hollywood after all.

Based on the preceding comments, my opinion should cinch it for you: Many enlightened managements' have packed up and moved their companies to (north) Texas over the past couple of years.It's all here: location, transportation, manpower, favorable business climate, weather, very favorable real estate market with prices more or less stable, and reasonably good government with a (hold your breath) BUDGET SURPLUS.
Yes, there are some cultural shortcomings, but, hell, we all go to NY for that. Then we come home to REALITY. I've lived in the Midwest, and West Coast, but I wouldn't call home anywhere else.

Can I make your reservations?

There you go again, trying to confuse Democrats with the facts.

Here's a down home, straight-shootin' aphorism Granny used to tell us. You get what you pay for.

To A. Cowens: Au contraire sir. Your granny was wrong. When it comes to government, you do NOT get what you paid for, unless, of course, you are a liberal.

Maybe it's good you got "taken away".

TH comment streams have a short half-life, but I found that the study referenced by Alphecca is both interesting and relevant. It also reinforces most of the points in these comments.