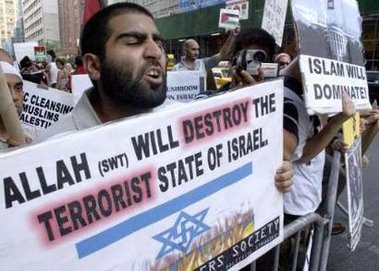 The al-Reuters caption is so absurd that it would be hilarious if it were not so deceptive:

Supporters of Lebanon protest outside the Israeli consulate in New York, July 18, 2006.

Via The Corner. More at LGF.

The picture of the Black Flag flying over the White House is simply icing on the cake.

I see a picture of the lebanese flag on a sheet of paper some guy printed out from his computer. He's hardcore.

That's actually a Palestinian flag. The Lebanese flag has a tree. (easiest way to spot it)

Too bad no foul tempered Mossad agents set off a car bomb there. Maybe they were taking pictures instead and running the results through biometric scanning systems. Hmm...