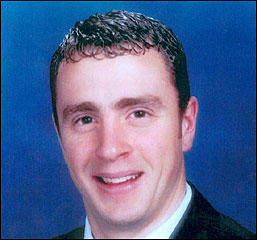 Welles Crowther, the Man in the Red Bandanna, and a member of our family. He could have gotten out in time, but kept going back in to bring out people who could not have made it on their own. Read the whole thing. More here:

Surviving also was the story of a young man with a red bandanna over his mouth and nose who appeared out of the chaos, issuing crisp instructions, lending his strength, and guiding the injured to the stairway out. He spoke with command, but wore no official rescue gear. "Anyone who can walk," he said, "walk down the stairs. Anyone who can walk and help someone else, help. There are people here you cannot help anymore, so don't try to." The young man led first one small group of injured and then another down 17 flights of stairs to relative safety. For nine months, no one knew who he was. Last May, when an article in the New York Times recounted his heroics, he was identified as Welles Crowther '99.

Crowther worked as an equities trader at Sandler O'Neill & Partners on the 104th floor of the south tower. After the first plane struck the north tower, he telephoned his mother, Alison Crowther, and left a message: He was evacuating the building. But he apparently never left. His body was discovered last March in unusual circumstances: as one of only two civilians among a cluster of policemen and firefighters in the ground floor lobby of the south tower, a staging area for the morning's rescue efforts.

In fact, Crowther was a fireman, too. From the age of 16, he had, like his father Jefferson Crowther, been a trained volunteer member of the Empire Hook & Ladder Company, in his hometown of Upper Nyack, New York. And like his father, he'd acquired the habit of carrying a bandanna in his pocket; the father carried a blue one, the son, red. 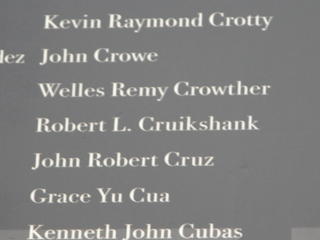 Here is my photograph of Welles' name on the plaque at the site of the World Trade Center in New York City.

UPDATE: Thank you Winds of Change for the link. Note that the "Winds" 9/11 post is the most useful assembly of links on the war you will find anywhere. You could spend all day digging through the fascinating material there.

UPDATE: As often happens, Cox & Forkum's drawing captures the heroism of the firefighters -- on duty and off -- like nothing else.