When was the last time anybody saw this in Beirut? 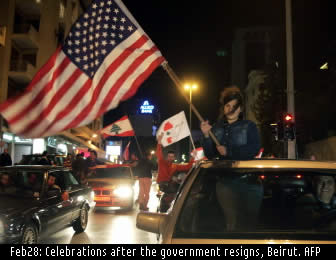 That is a beautiful flag, isn't it?

You have to wonder whether any European newspapers picked up this photograph.

UPDATE: Some people will deny Bush credit no matter how compelling the evidence:

Of course, this will be portrayed as a victory instigated by Bush and CO. It simply is not the case, though. And you could not tell anybody in Lebanon that Bush is the reason this has happened.... This is a historic day for Lebanon instigated by the Lebanese alone--not Bush CO.

I have seen no evidence that the Bush Administration has even hinted at taking a bit of the credit, as it were, for the Cedar Revolution. But doesn't the photo above suggest that at least one Lebanese thinks it should?

An unveiled women in a predominently Muslim country occupied by the junior member of the Axis of Evil waving the American flag out of a sunroof is a long way from that infamous ulating Palestinian woman celebrating 9/11.

Yes, there's a long way to go but that's an amazing picture.

It sure is. It is incredibly cool.