A chocolate Lab on a frozen Adirondack lake. Under that thin layer of snow there is beautiful, smooth ice that you can skate on. If you are willing to carry your skates several miles through the woods to Heaven's Lake, that is. 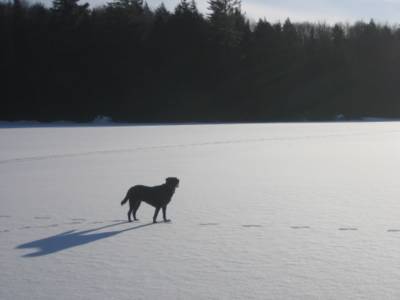 I used to live in NY, where there was a swampy area that would sometimes flood then freeze then snow. To get there you had to crawl through a jungle tunnel of poison ivy vines as thick as my wrists, but when you got there you had the rare privelege of skating magically over snow -- one of the coolest experiences in life. My little swamp lake was only about 1/8 of an acre, but then I was only 12. And I had it all to myself.