A short note on the causes of the financial crisis

There are no simple explanations for the financial crisis. To the extent the cause was a housing bubble, it is far from obvious that it was purely an American crisis, brought about either by Community Reinvestment Act initiatives or Fannie and Freddie. Home prices rose all over the world. There may indeed have been a credit bubble -- almost certainly there was -- but it engulfed the globe. 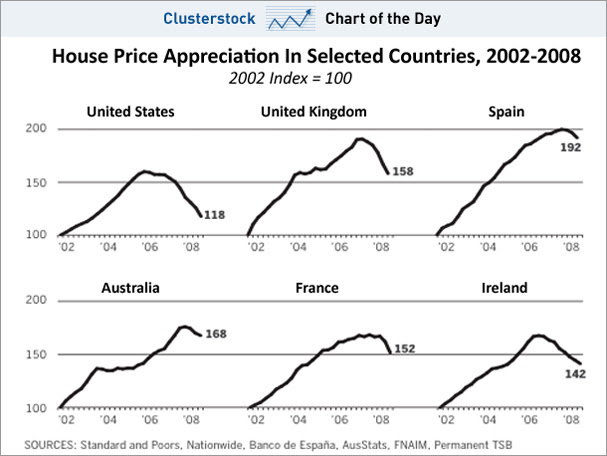 In the UK, it was primarily a boom in house prices, fueled by sloppy lending practices at the banks. People were encouraged to buy houses way beyond what they could afford.

They then saw the value of the property apparently rising, and borrowed for luxuries on the back of that.

And it is Gordon Brown's fault for not putting a damper on the boom. He seems to have been completely subservient to the banks.

Alan Greenspan and the Fedcseems to have played a greater role than we might have suspected.

Granted other countries also saw a decrease in housing prices, but no where near the percentage and absolute dollar value that the U.S. saw. When you examine each country, you see that England came the closest, but still not as bad. One has to ask the question why was it worse in America? I dont believe those other countries had the same leniency with respect to giving out mortgages (England being the next worst culprit in this scheme.) Also, how much of the global boom took place because huge swaths of people in America moved from the have not's to the have's and started leveraging what they could not afford in the first place?

From a policy perspective the collapse of the credit bubble isn't the problem, the bailout is. The money center banks, all of which were insolvent, should have been allowed to fail and liquidated. Instead, on a global level, countries chose to transfer these losses from the private sector to the public sector, the biggest wealth transfer in the history of mankind.

Look at the countries in your chart. Ireland bailed out its banks, many of which were foreign, and now the nation is insolvent. Ditto Spain. Ditto UK. Ditto France. (Contra Iceland, which had the good sense to tell their banks to pound sand). Australia has escaped collapse thus far primarily due to the fact that it is mineral rich. The US is technically insolvent but reserve currency status and the world's strongest military keeps us plugging along.

For the life of me I can't understand why people in America aren't rioting in the street, pitchforks in hand, demanding the heads of Paulson, Geithner, Bernanke, Bush, and Obama on a pike. Thank God most Americans are economically illiterate.

I agree with the last Anon: Global Credit Bubble

The underlying detail can get complicated, but when you step back for the Macro Macro view it's that simple.

The graph of the USA above is misleading as it mixes states like CA, FL, NV and AZ with states like North Dakota and Iowa. If disaggregated our Sand States would look worse than the other countries above, I'd expect.

Americans haven't been rioting in the street, but they may yet. If they learn half of what was going on we can expect a populist revolt. MSM hasn't been reporting, but adverse developments may force them to. How long can we kick the cans of high unemployment, mortgage foreclosure overhang and bankrupt municipalities down the road? Bernanke is just about played out with QE1-n! ...developing.

I expect some of this to hit before the 2012 election. Obama and MSM have hollowed out the populist base of the Democratic party. It'll be up for grabs.

Keep your eyes on Ireland --it's a good proxy for the USA in this regard.

The Celtic Tiger boom had a solid start, but it went into unsustainable overdrive from too cheap money funneled into real estate. The Irish government and Irish banks were a corrupt unholy alliance. Lots of pigs at the trough.

The EU couldn't let the Irish banks fail because of fear of contagion. The Irish political-banking establishment couldn't accept being wiped out. So the deal struck in effect was to mortgage the future of the Irish youth.

At some point -- my bet is within three years -- there will be a radical political readjustment (it's already started) that will lead to a rejection of the deal just struck and DEFAULT.

The USA has some parallels, I submit.

"The Irish government and Irish banks were a corrupt unholy alliance. Lots of pigs at the trough."

Same in the UK.

Then look at large independent parts of the country that are as large as many of those countries. Where the price appreciated 300% and more and prices have fallen 60% and more. Then it comes more into perspective. Most parts of the country did not get significant home price inflation and had almost no slump in home prices. But the places that did experience the bubble experienced it in a big way.