So, this morning while driving through Dallas...

...I came across some guys who were, no doubt, just then concocting their story to explain this: 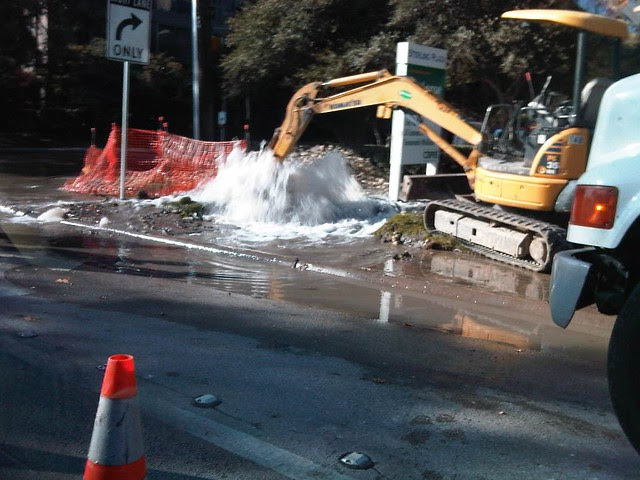 "It's the surveyor's fault."

Been there, done that, and it was.

This happens more frequently than you would believe. As a routine matter underground pipes aren't, in fact, where blueprints and maps say they are. The equipment operator is just relieved it was water and not gas or electricity.

The operator is very busy right now trying to "rent" some legitimate ID to show to the cops when they get there. He is also practicing his "no spica da Englaise."

Re anon @ 10:33. I find it hard to believe that they are dumb enough to let an undoc'd worker operate heavy equipment. Cart junk around a work site, sure. Sweep crap up, sure. But not a hoe.

I worked in Florida as a form carpenter. Next door to our jobsite was apartments going up on a whole city block with a steel girder garage in the middle. It was huge but the whole thing was made of jointed 2x4s and OSB.

The whole workforce was Hispanic with the foremen white.

Well, one of the Lull forklift drivers, a mexican, caught a high electrical line while lifting rafters to be set.

No fire extinguishers on site.

Engine was taken in earlier that day to have radio replaced.

Heat so terrible that it torched a Post Office across the street.

All the concrete and pipe had to be torn out of the ground---steel girders scrapped.

You can't top that.

Might not be as much a fail as you think. Sometimes when they have underground water pipes leaking, they will dig out all around them first, then cut the pressure to swap out the pipe (as to minimize the loss of pressure to the neighborhood). Sometimes the weak pipe will not react well and break, but they're all ready with the new section and the pumps and such.

Utility workers can be pretty sharp cookies. Afer all, they not only do this for a living, but they clean up the messes other idiots with backhoes make.