Longtime readers know that I have collected coins with fluctuating passion since I was but a wee bairn, and that as a result I habitually scan my change for interesting or valuable coins. Alas, Gresham's law has driven most everything valuable from circulation, although -- no law being perfectly enforced -- I have found one silver dime in the last year.

At any rate, this morning in the Starbucks on Nassau Street I encountered a numismatic miracle: I found in my change three pre-1959 Lincoln cents -- "wheaties" in the art. Other than at a coin dealer, who occasionally hand out wheaties in change to bring the young folks in to the hobby, I am not sure I remember that happening ever. So you can imagine my excitement. Photographic evidence: 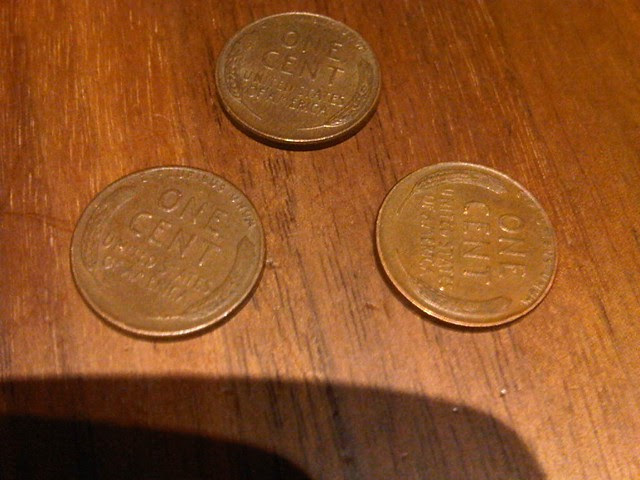 For those of you who do the same thing, the dates are 1945, 1956, and 1958-D. Non-collectors who have made it this far perhaps might not know that from 1944-1946 the government minted cents from expended ammunition cartridges. The metal in that cent formerly housed a bullet or shell that might, if it was very lucky, have whacked a Nawzi or a kamikaze.

The final question, of course, is why there were three wheaties -- and perhaps many more -- in the cash register at the Nassau Street Starbucks. Probably some grandmother -- or grandmother's heir -- found and "cashed in" an ancient jar of "pennies," which were then rolled by machine and supplied to the local merchants for change, never imagining that he or she would deliver childlike joy into the heart of an old coin collector.

Just like you I always scan my change. Nothing ever comes of it, so it truly is a rare find for three wheaties to pop up in change.

Before the British coinage went decimal, it was quite common to get interesting old coins in the change, even Victorian pennies (badly worn). Since decimalisation, nothing much.

I do have a Kennedy silver dollar somewhere. Is that worth anything?

You should have gone back in and bought every $1.01 item you could find, over and over!

I check my change off and on as well. However, earlier this year I was in a rush when I left the coffee shop and simply put the coins in my pocket. When I got to work, I pulled the change out intending to put it in the "change well" in my desk drawer. It was cold that day and I was a bit fumble-fingered and instead of going into the change well, the hand full of coins landed on the desktop.

I stopped short when I heard that unique clink - digging through the change I uncovered a 1963 silver quarter. Since then, I've checked my change every time - mainly finding Canadian coins masquerading as pennies.

Mike, great point. If you are in the habit you can hear and feel the difference in silver coins. The thrill of finding one is far out of proportion to the financial gain!

gresham knew what he was talking about. i've been a silver bug since i was a kid, after seeing the hunt brother's 'excellent silver adventure' unfold. 2 fat rich guys (almost) corner the *entire world's* #2 precious metal; prices rise 12fold; then it all comes tumbling down virtually overnight, taking a major wall st. playa (bache?) with it. great stuff! MUCH better than 'the love boat'.

I suspect someone cashed in Grandma's penny jar.

I've been collecting wheat pennies since grade school. Back in the 80's, I bought some takeout lunch and returned to my office. Later that afternoon, I looked at my change and found 3 or 4 shiny wheat pennies. I sprinted back to the restaurant and asked the cashier for all her pennies. She looked at me like I was crazy, but I raked in another dozen or so.

Many decades ago a friend who was a numismatic explained the history of various pieces of currency; until that point I had not fully appreciated the value and dedication of those who pursue the discipline/hobby.

I always scan my loose change for odd coinage (sadly, it's usually Canadian or from West Indies). I got 9 silver dimes & scores of those beautiful old, all-copper pennies. There is something special about old money - you never know who handled it. Maybe someone really important in his or her day?

Silver dimes are rejected from coin counting machines, though I'd not let machine sort my spare change.

I don't know what to make of the fact that there are so many change scanners amongst TH readers. Really, this seems to be at least as interesting as major controversies.

Still, I suffer too. I have scanned my change for almost 50 years. Everything is stored and I have no idea whether the effort amounted to a good investment.

I view the receipt of three wheaties at a Starbucks as a day of sadness. These things aren't floating around in band drawers. The only reason they appeared is because somebody wanted a double latte, and they took the money from someone else--who had labored years to harbor those pennies.

I've been collecting since the '50s and my father before me. I have his collection and have added to it over the years. Imagine getting an Indian Head cent or Buffalo Nickel in your change. When silver coins were dropped in 1965, Dad started collecting any silver coins he found in his change. I have several large jars of the stuff in the attic. As to current US coinage I have been buying 2 proof and 2 uncirculated sets each year from the mint. I have been doing this since 1969. The Eisenhower dollar in the 1973 uncirculated set is quite valuable since they didn't mint any standard strikes that year.

I've checked coins since the days when I collected for my paper route (to give a time frame it was the Philly Bulletin). Last year at a beer store, I glanced into the change drawer, and all the penny rolls had 1930s written on the wrapper. I paid cash and took all those pennies in change. Sad to think some old sod cashed in hundreds of 1930s pennies for cheap beer.

I just found four quarts of pennies collected over the last 40 years. Should I sort through these and look for what?