You know you have a public relations problem...

...when you are still more unpopular than BP. 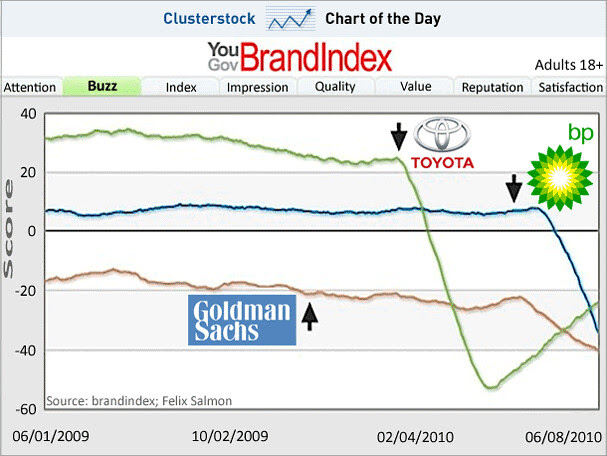 Goldman's problem is that rather than failing so miserably as to require a bailout it made too much money during the financial crisis and its aftermath. There's that, but also this: Democratic politicians bash it because they are trying to delegitimize the finance industry (so as to get their regulatory package through) and Republican politicians bash it because Goldman is, well, a Democratic firm.

>> Goldman's problem is that rather than failing so miserably as to require a bailout it made too much money during the financial crisis and its aftermath.

Anon attorney here. Again, this is your blindspot, TH, and it is a massive one at that. Goldman DID require a bailout, and they got it. Goldman would have failed if AIG had gone under, but Henry Paulson stepped in and passed $13 billion through AIG to Goldman.

In what parallel universe does a $70 billion direct cash infusion from the US taxpayer not constitute a bailout??

Then there's the matter of GS converting to a bank holding company and getting access to the Fed's discount window. They are now essentially a massive hedge fund which can borrow essentially at 0% interest and operates with an implicit government guarantee, courtesy of the US taxpayer.

Again, it boggles the mind how people steeped in the culture of the finance world can just wave this off, as if these facts don't matter.

Paulson may have done what he did believing that he had to. But he was conflicted. It's crony capitalism.

A failed Australian hedge fund sued Goldman this week over the Timberwolf CDO -- the one Senator Levin kept quoting from Goldman e-mails as being "one shitty deal." What's noteworthy is that for over a year the hedge fund has been "negotiating" with Goldman while also "dropping a dime" with the SEC and the Levin Commission about the deal.

We may learn more about Goldman-sponsored CDOs like "Davis Square". These deals are actually worse than Fabrice's deal as the collateral manager had the right to substitute different collateral after the initial deal was struck and rated. Apparently this was disclosed in the fine print, which may explain why some think that banks need to be held to a higher standard of having fiduciary duties to their institutional clients.

AIG bought a lot of this shit in 2005, only to find that even worse Vintage 2007 subprime mortgages got put into the CDOs later. Apparently, Goldman used these CDOs as a dumping ground. Knowing what it knew, Goldman also bought credit default swaps from AIG on these deals -- so they screwed AIG over coming and going. Affiliates of French banks Societe Generale and Credit Agricole were the collateral managers. A little digging would likely show why they needed AIG bailout money too. A little digging might show that Goldman and the collateral managers played footsie under the table. Total conjencture on my part: does the recent announcement that AIG's Joe Cassano won't be charged mean that he's a co-operating witness?

I'm not trying to pick on Goldman especially. Merrill's ex-CEO Stan O'Neal is a far worse offender -- he should be in jail, right next to Fannie Mae's ex-CEO Franklin Raines -- does that make me a racist?

But if you fly a pirate flag you shouldn't expect to hail the Navy and Coast Guard when you get in trouble. On top of that, we just gave Goldman letters of marque.

I don't know what happens here next. It could all blow over. Or we could have even more litigious announcements before November. Obama & Co aren't above using the Department of Justice for political ends -- Holder will do whatever Obama tells him to. Am I wrong?

"Goldman Sachs shares fell 2.5% while the rest of the financial sector was on the rise after The Financial Times reported that the Securities and Exchange Commission has stepped up its examination into a Goldman CDO that wasn't part of the civil fraud charges filed against the firm in April.

The SEC's interest in Hudson Mezzanine Funding, a $2 billion CDO, comes amid settlement talks with Goldman over accusations that the bank defrauded investors in Abacus, a similar CDO, the newspaper reports, citing people close to the matter. "