City by the Bay tab dump!

I'm in San Francisco for JP Morgan's annual health care conference, and as usual it is a mad house of non-stop meetings and chance encounters with others in the business. I have a little break, though, and some accumulated tabs and other fun to pass along. Before the tabs, therefore, please enjoy this moment from the San Francisco art scene (and yes, that's my reflection in the window): 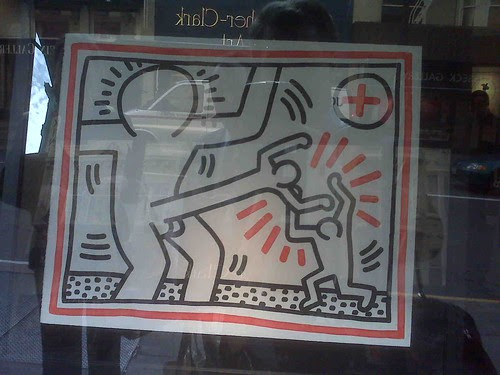 Feel free to put your caption in the comments.

The TH sister, a professor of biology and an expert on invasive species and the damage therefrom, has an interesting post on the influence of catch limits (such as in the harvesting of crabs) on the damage done by invasive species on which those yummy predators were feasting.

A look at the structure of compensation at Bear Stearns and Lehman. Remember them?

Weather is not climate, but (1) December 2009 was the second snowiest on record in the Northern Hemisphere, and (2) one of the scientists of the Intergovernmental Panel on Climate Change says we are looking at a "mini ice age" that will push down temperatures for the next 30 years. Since I may not live much more than that I consider the timing atrocious.

Are we inflating another asset bubble? Based on the enthusiasm with which the investment bankers I know greet the new year, I would say "yes." All that money has to go somewhere.

If you read blogs, you already know that Sarah Palin is going to work for Fox News. Good for both of them. Liberals will scoff (scroll through the blog posts here), but Fox knows star power when it sees it.

Of the various reasons to oppose the nomination of Erroll Southers to run the TSA, his statement that terrorists attack the United States because of its alliances "with countries like Israel and France" seems the least persuasive (at least when compared to supporting the unionization of the agency's workers). But it will generate votes against him.

Ezra Klein has a proposal for improving journalism (link fixed). It would have been a great idea for preserving the professionalism of newspapers back when they generated some profits. Now, though, I fear it would be much too costly.

Off topic (sorry) but you might find this of interest - just think about internal controls:

SF has much great physical beauty. All of that is ruined by the presence of a vast number of leftist scumbags.

More snow doesn't equal more cold. Warmth can actually increase snowfall in some cases, by increasing moisture content from air over oceans and then dumping it at high elevations or high latitudes. This isn't a weather v. climate issue.

The mini-ice-age link omits ocean temps. One guess as to why that's the case.

But more cold equals more cold. From the article: 'The cold is setting records too. Oranges are freezing and millions of tropical fish are dying in Florida, there are Record low temperatures in Cuba and thousands of new low temperature records being set in the USA as well as Europe.'

"The mini-ice-age link omits ocean temps. One guess as to why that's the case."

Irrelevance? The chief effect of ocean temperatures on climate is how it affects air temperature, yes? (that's what a number of 'the oceans' warming means we're all going to die' climatologist websites said, anyway) Air temperature that has fallen.

Say TH, the "improving journalism" link is wrong. Can you fix it? I am interested in the topic. Thx.