Sea ice, and a partial defense of George Will

There is some new Arctic sea ice data, and breathless publicity to go along with it. The "climate change" angle is that there is, supposedly, a lot less "multi-season" (i.e., thick) Arctic sea ice at the end of this boreal winter than there has been in seasons past, and that portends iceless summers in the Arctic sea inside of the next decade. Supposedly.

The political story, emphasized by the lefty blogs, is that the WaPo's version of the story took a shot at its own conservative columnist George Will, who has been venturing into AGW skepticism without a license. Click through the links if you want the inside baseball of the controversy from the southpaw perspective, or sift through the posts tagged at Memeorandum.

There are two things that might be said about this story, both of which were -- curiously -- omitted by the Washington Post and the blogs basking in the bashing of Will.

First, global sea ice area is actually above the long-term seasonally adjusted "baseline," just as it was in last year's boreal spring. 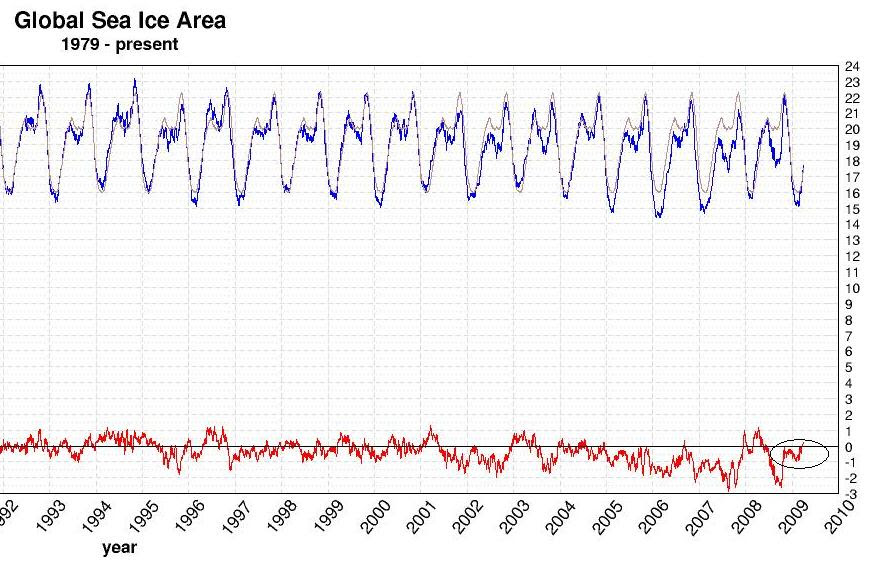 Since the disappearance of sea ice is a problem primarily because it reduces the albedo, or reflectivity, of the surface of the planet, it would seem that any article that expresses concern over melting Arctic sea ice needs also to explain why offsetting Antarctic ice does not compensate (indeed, because Antarctic sea ice is on average further from the pole and therefore exposed to more sunshine, one would expect that its albedo would have greater influence over global climate than Arctic sea ice).

Now, there is the argument that as of a couple of years ago Arctic sea ice was shrinking more quickly than Antarctic sea ice was growing, of which more in the addendum to this post, but any article on the Arctic that does not explain away the opposite phenomenon in the Antarctic is susceptible to the charge that it is cherry-picking the data. Which, by the way, is a useful segue to the next point.

The National Snow and Ice Data Center seems to be moving the goal posts:

In past years, NSIDC has referred to “declining multi-year ice” as the problem which the Arctic faces. Mark Serreze at NSIDC forecast a possible “Ice Free North Pole” in 2008, based on the fact that it had only first year ice. This year, multi-year ice has increased and NSIDC is now referring to declining “2+ year old” ice as the problem....

Due to the record minimum in 2007, it goes without saying that there isn’t a lot of three year old ice in 2009. Maybe next year they can raise the bar to 3+ year old ice, as the multi-year ice ages one more year?

Multi-year ice defined the old way is up in the last year. [Corrected per Brian's comment.]

One is forced to wonder why the reporters and bloggers who hacked away at George Will decided not to mention either of these points, both of which substantially muffle the noise pumping out of the NSIDC flack machine.

And over at the Washington Post they're using this to chide their own columnist's ice writing. The WP's editor Nils Bruzelius should explain how their factual checking ignored the missing one-year ice. People notice gaps in ice, but not gaps in ice data.

You misread the post, TH. Multiyear isn't up 25% from last year, it's up "to 25%" of total ice, approx 5% increase from the previous year, and outweighed by the crash in the old ice.

The important issue about global sea ice isn't albedo, or at least not right now. The issue is that models predicted that ice would decline in the Arctic and have mixed results in the Antarctic. What we're seeing either validates the models or suggests the models actually underestimate the problem.

Eventually the Antarctic ice will also start declining, as increased precip fails to keep with increased temps. Then you'll have your albedo problem. The real problem even then though isn't albedo so much as removing the floating ice shelves that stop landbound ice from moving in and melting.

Also worth noting that global levels are below average for the vast majority of the last ten years, so we do have something of an albedo problem already.

If the Arctic ice is thinning, could volcanic activity have something to do with it?:

And by the way, Goddard at WattsUp has reading comprehension problems.

He says, "Mark Serreze at NSIDC forecast a possible 'Ice Free North Pole' in 2008, based on the fact that it had only first year ice."

Click the link and you get, "Taken together, an assessment of the available evidence, detailed below, points to another extreme September sea ice minimum. Could the North Pole be ice free this melt season? Given that this region is currently covered with first-year ice, that seems quite possible."

Using WattsUp as a source will only lead to tears, IMHO.

"Since the disappearance of sea ice is a problem primarily because it reduces the albedo, or reflectivity, of the surface of the planet"

How will increased reliance upon solar energy increase the earth's albedo? Seems to me that solar energy generation on any appreciable scale might contribute to anthopogenic global warming as, by definition, solar collectors are designed to absorb (rather than reflect - i.e., low albedo) as much sunlight as possible. Think "black body."

More than one study has suggested that we paint all the rooftops white, which strikes me as a vastly more palatable solution than trying to reduce CO2 emissions by 80% in a couple of decades.

How about we just "block the suns rays" from the earth?

I would have thought the recent financial fiasco abetted by computer models saying everything was under control would have given at least a moment's pause to the scientists relying on computer models to predict imminent global catastrophe.

It appears that the incomplete physics of the GCM simulations do not yet accurately capture the negative feedbacks of the physical Earth. An Inadvertent Test resulted in real data to compare with GCM simulation results.

TH, the paper you link to says painting roofs and pavement white offsets just one year of total CO2 emissions. That's something, but one year later we're at the same problem as we had before.