I was in New York this afternoon with the TigerHawk Teenager for a college interview. Walking down 7th Avenue toward Penn Station, we happened across a large pro-Hamas demonstration that stretched for four blocks or so along the east side of the avenue. Pictures follow and, yes, the crowd was yelling "Alahu Akbar" and blaming George Bush, in case you were wondering Who is great and who is not.

No two-state solution for these folks... 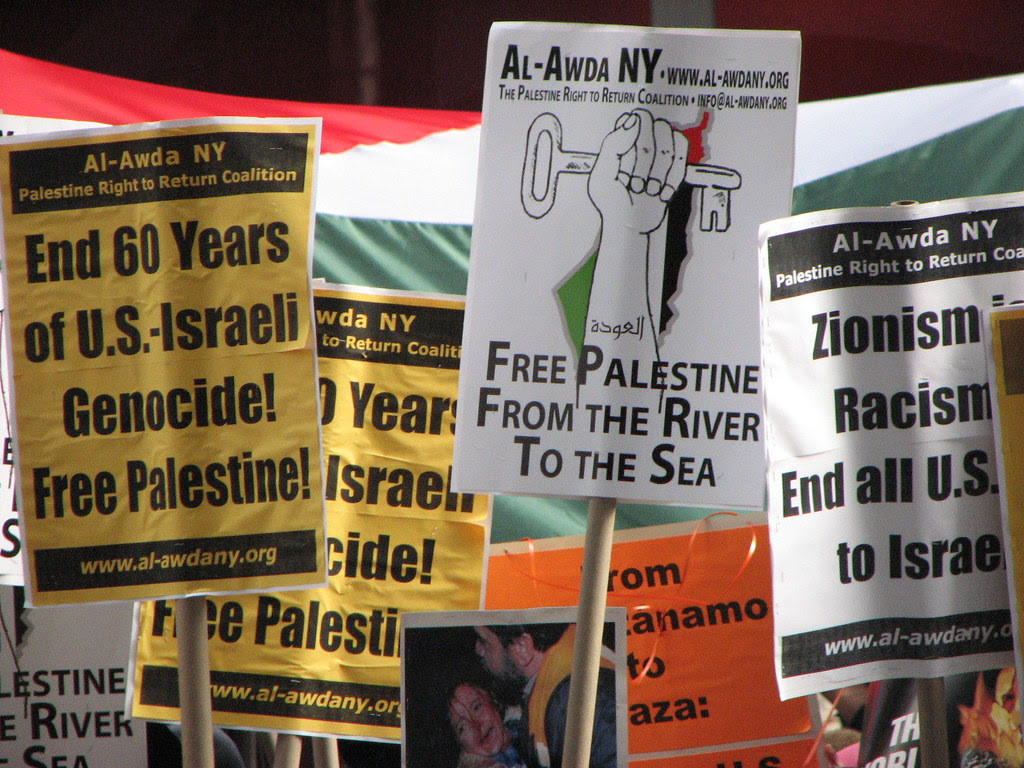 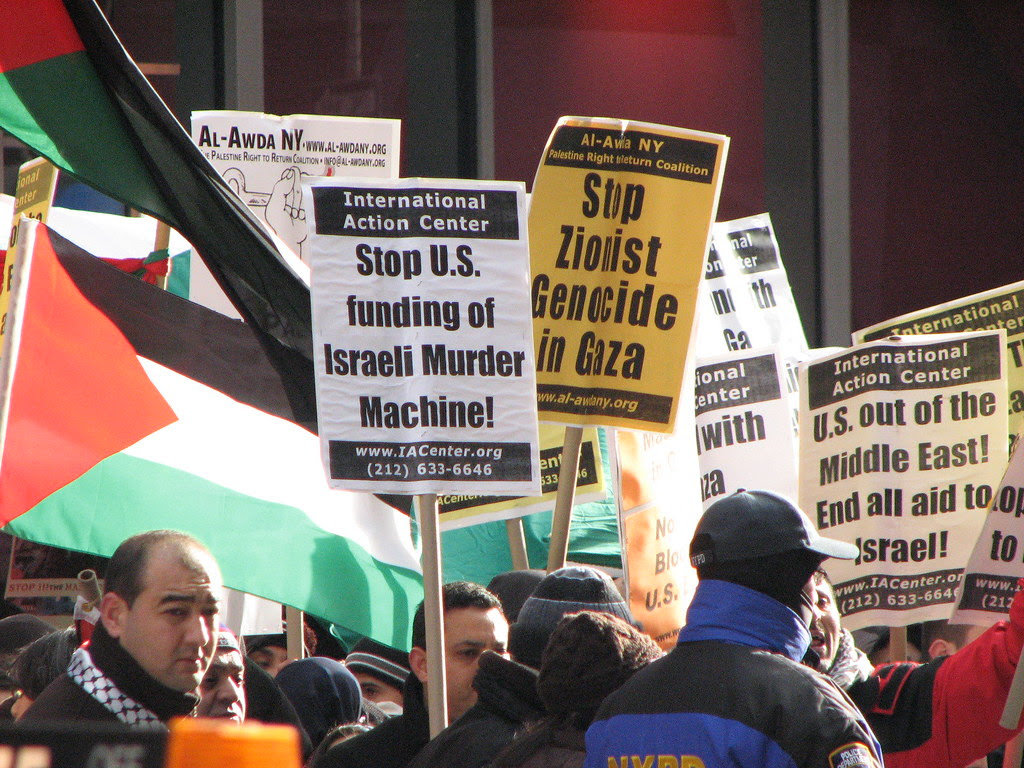 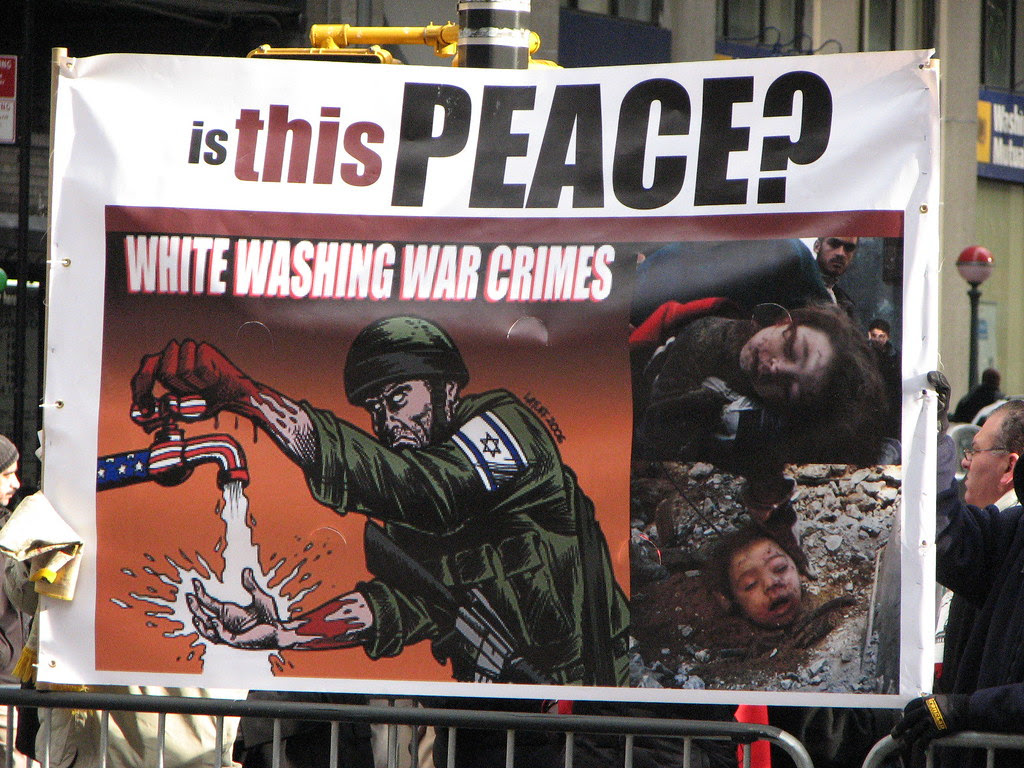 Since this is not Germany, both swastikas ... 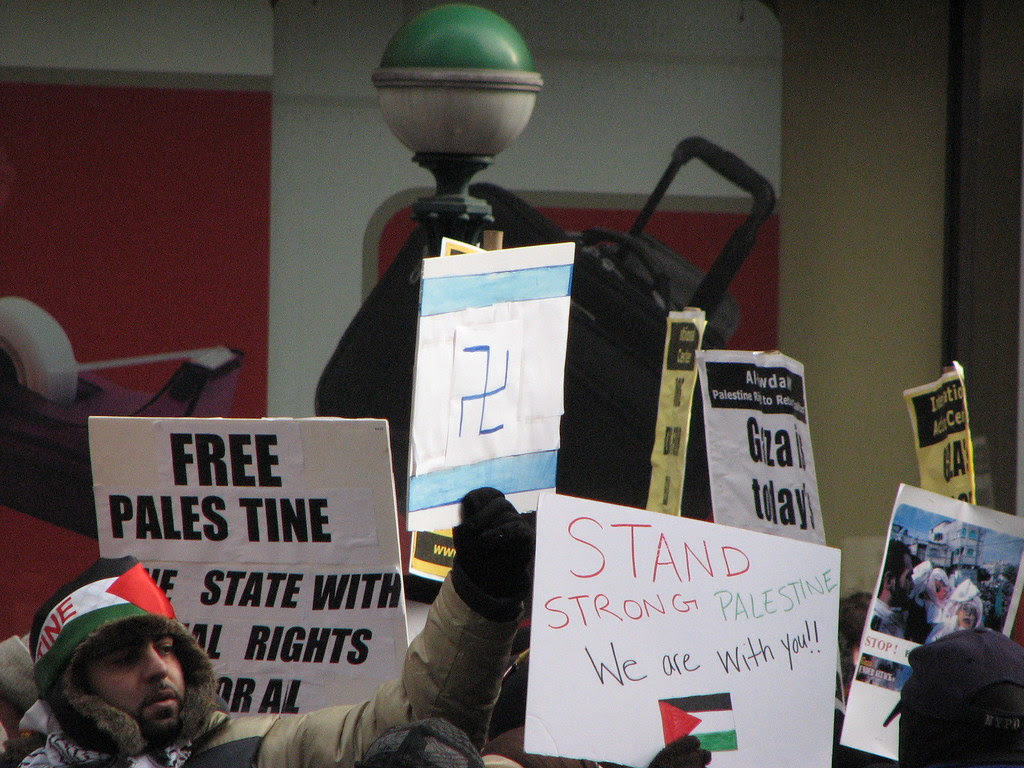 ...and the counterdemonstrating Star of David are allowed... 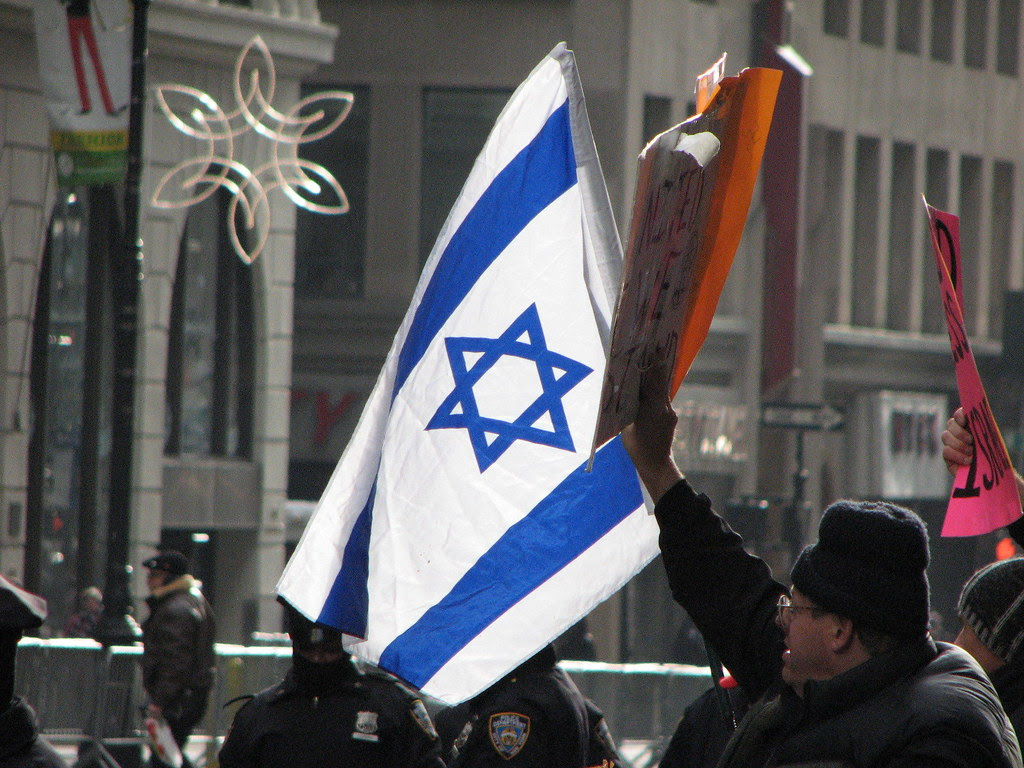 Fun, and indoctrination, for the whole family! 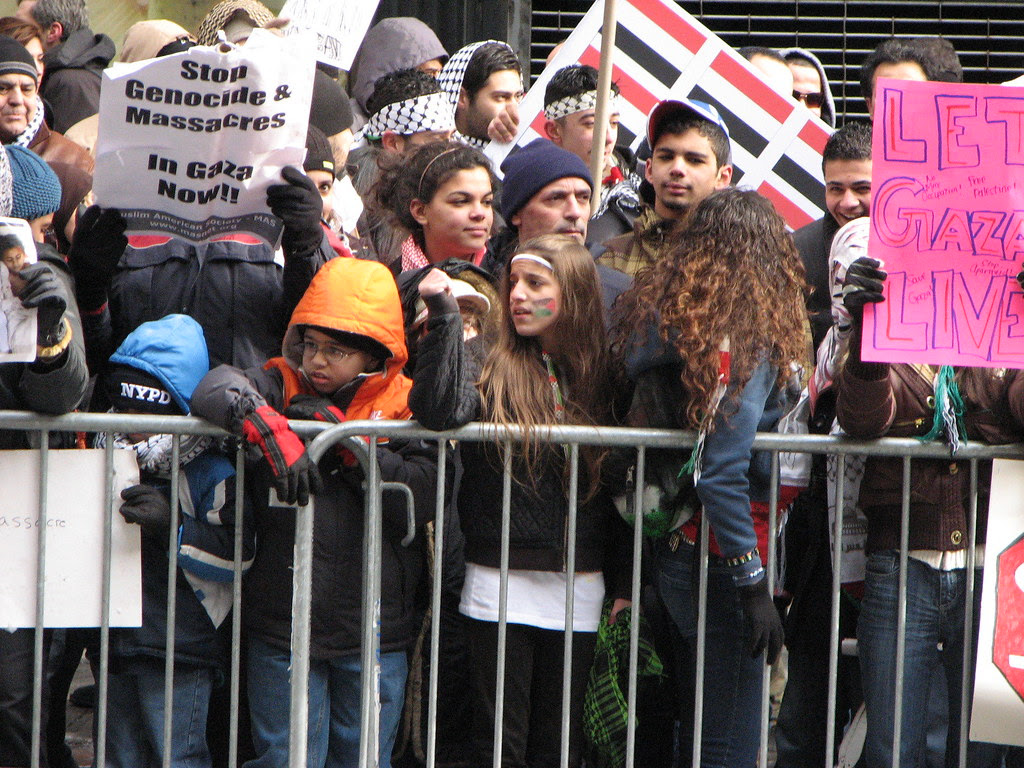 I'll post much more scenic photos from our day in New York this evening.

I was at the counterdemonstration for a while. You made a very good point that the anti-Israeli demonstrators were not interested in a two state solutions. A common chant at these events is "From the river to the sea, Palestine will be free".

They are also intent on labeling tarring Israel with label of genocide.

I became a pro-Israel activist via being active in Amnesty International. I got to know the pro-Palestinian "human rights" activists and realized they really wanted to destroy Israel.

Perfect opportunity to do a "zombietime" photo shoot. Nice shots. They really show the sweet and lovable Moonbatus Neuvoyorkus in their natural habitat. More please.

If you love Israel so much, why don't you move there.

Israel is nothing more than a big land grab, made at the expense of the Palestinians. As a typical American with a lot on my mind, I don't care about the Palestinians ... the world is just too big.

I do care that my country's foreign policy has been systemetically subverted over the years by AIPAC, and that we can't have an open debate about it.

Go ahead and flame me, which will only prove my point.

There was a small demonstration in downtown Princeton today, too. Maybe 30 people in Palmer Square.

Re: "Israel is nothing more than a big land grab, made at the expense of the Palestinians."

America was nothing more than a big land grab, made at the expense of the American Indians.

"Israel is nothing more than a big land grab, made at the expense of the Palestinians."

The same could be said of any country that has ever existed. I don't think there is a single piece of land that belongs to the same people that it did when humans first arrived there.

Truth is that international law doesn't exist. There is only what you can get away with and what you can't.

Re: "Israel is nothing more than a big land grab, made at the expense of the Palestinians."

Israel was partioned from the Palestinian Mandate... controlled by the British Empire.

Approx. 20% of the land was given to create Israel... the other 80% was given to Arabs to establish the country of Jordan. Jordan *is* the Palestine that Arabs call for.

Why should Israel continue to support, aid and comfort a hostile community dedicated to Israel's own destruction? Where are the oil-rich Arab states in this equation?

Dubai royalty can spend a billion dollars for racehorses in less than a week; how many hospitals, schools and housing have they built for their "brothers" in palestine?

Saudi's fund billions into the building of mosques in western europe and north america; could they not throw a few million into building palestinians the same bomb shelters israeli's depend on when the rockets fly from Hamas locations?

Israel has been kind and generous it their treatment of "palestinians" to grossly imbecilic standards. While the "global ummah" polishes their Mercedes and their gold-plated cutlery.

The shame is NOT Israel's.

PS... YOU IDIOT. A little lesson in history:

So.... without going further into history... and using the idiotic logic of the poster I quoted above: I suppose the Italians should immediately lay claim to Gaza and Israel and kick both jews and arabs from the land?

Did anyone notice who sponsored this little fete: The Inernational Action Center!

These guys are the quasi-Marxist organization founded by Ramsey Clarke in 1991 and funded by several far-left sources.

"IAC defines itself as an "anti-capitalist and anti-imperialist" organization. We want to see an end of the human suffering caused by living under a system that puts profit before peoples needs. We want to shut down the multi-national corporations and banks based in the U.S., Europe and Japan that extract resources and debt payments from the rest of the world. We want to put a stop to the role of the Pentagon and the CIA play by protecting and expanding this wholescale plunder of these private businesses.


The IAC has mobilized nationally against racist police brutality, to end the death penalty, and defense of political prisoners like Mumia Abu-Jamal, Leonard Peltier and the Cuban Five. We have been part of local community-based struggles demanding affordable housing, healthcare, utility prices, education and the right of every worker to a job at a living wage. We have built coalitions in solidarity with immigrant workers, calling for the end to raids and deportations and against criminalization of undocumented workers. The IAC has launched campaigns in solidarity with Katrina survivors, against attacks women's reproductive rights and to demand an end of the violence and oppression of lesbian and gay, bi and trans people face in society."


Gentlemen....Communism is alive and well. Coupled with Mr. Obama's decision to open a future dialogue with HAMAS, one wonders where Joe McCarthy is now that we NEED HIM!!!

Anyone who has tried to be an honest broker over Israel has paid a price, from the British in the late 1940s, to Count Folke Bernadotte, to Jimmy Carter. I'd rather the US butted out. As a nation we gain nothing from our support of Israel. It's an entirely one-sided realtionship that's only twisted our foreign policy.

Many Israeli historians question the official history. They focus on a traditional people -- the Palestinians being driven off their land by force of arms ... even the deliberate use of rape and murder.

Israel has a long-term problem with the Palestinians because of their much higher birth rate.

America was nothing more than a big land grab, made at the expense of the American Indians.

EUROPE was nothing more than a big land grab, made at the expense of the Neanderthals!

EARTH was nothing but a big land grab upon grabbing land after crawling out of the sea.

Land is nothing more than a big land grab.

I would suggest brother Anonymous
(He of the 'land grab' comment) might benefit from a visit to the Holocaust Museum.

Learn a little history, please. In case you haven't looked lately, history is beginning to repeat itself with all the really disgusting anti-Semitism in W Europe.

I'm an Irish Catholic and there are days I wish I were Jewish because I have so much respect for their determination and courage.

"Israel is nothing more than a big land grab, made at the expense of the Palestinians."

Where did the Arabs get the land?

They stole it from the Byzantines.

Where did the Byzantines get the land?

They inherited it from the Romans.

Where did the Romans get the land?

They seized it from the Jews.

Where did the Jews get the land?

They took it by force from an extinct people known to history as the Canaanites.

Seeing as there aren't any more Canaanites, who do you think ought to be considered the original owners?

Off topic, but tangentially related, here is a mock-up of what the NYT front page would have looked like covering the Warsaw ghetto uprising, had today's editors put the page together.

What's the matter with you guys? Don't you know that history began in 1967?

All that stuff about the Jordanians and Egyptians, the British, the Ottomans, the Crusaders, the Umayads, the Caliphate, the Byzantines, the Romans, Hasmoneans, Selucids, Greeks, Persians, Babylonians, Israelites, Philistines, Caananites, and whoever I might have missed were probably made up by dead white men anyway.