Bob Herbert is now citing random comments he reads on blogs as evidence in support of the claim that the Clintons are smearing Barack Obama. There seems to be fairly widespread agreement that even New York Times columnists can find more authoritative sources to make their points.

But that's not the best part.

Herbert uncharitably chose to snark on the typos in the quoted blog comment:

Consider, for example, the following Web posting (misspellings and all) from a mainstream news blog on Jan. 13:

“omg people get a grip. Can you imagine calling our president barak hussien obama ... I cant, I pray no one would be disrespectful enough to put this man in our whitehouse.”

Not only did Herbert's editor fail to stop the beclowning inherent in his use of a blog comment, but he or she produced this pull-quote to draw our attention to the column: 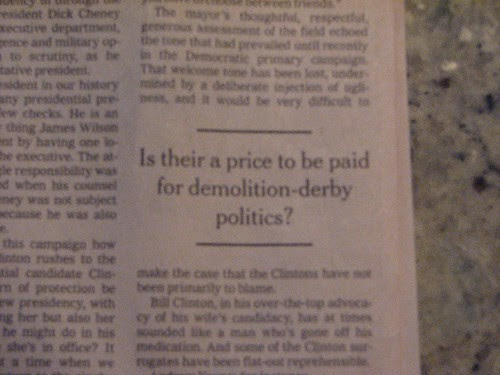 "Misspellings and all" indeed!

Their, There, or They're?

Their is a possessive pronoun. It always describes a noun.

Note the spelling of their. It comes from the word they, so the e comes before the i.


There is an adverb meaning "that location." It is sometimes used with the verb to be as an idiom. It is spelled like here which means "this location."


They're is a contraction of they are. Note the spelling: The a from are is replaced by an apostrophe.


Examples: Their dog has fleas. (possessive of they)

I put the collar right there. (that location)

There are five prime numbers less than ten.
(with to be)

Hard to beleive. Frickin' copy editing is too hard (not "to hard") for the NYT now.

Understanding that Herbert is a columnist and not a reporter, I suppose he can draw his observations and information from a multitude of sources -- however he sees fit. It then is up to the readers of his column to judge whether his sourcing and analysis makes his pieces worth reading. Episodes such as this (the use of a blog comment illustrating misplaced anti-Muslim sentiment as a hurdle for the Obama campaign to overcome) must reduce the goodwill even his left-wing fans have for him.

When the only proofing done is the spell checker, things like this happen.

Herbert is a tool anyway, so I'm enjoying this.

Nor are the words in the blog comment technically misspellings. There is a style of online communication which eschews capitalization and much punctuation. I find it barbaric and hurried in tone, but the use of that style does not prove that the writer is unable to spell words correctly.

Have you ever read Confessions of an Ink Stained Wretch and American Carnival? Two required texts for any clown who still pushes this "liberal" media crap and even find sniggly things with which to snipe at the NYT.

Just a word to the NYT:
Glass houses and stones do not mix.