I am still in Las Vegas at an extended management meeting. I haven't made it into a casino yet, but after 10 hours of presentations we had a nice dinner in one of the restaurants in the hotel, strolled around outside for half an hour, and took in the 10:30 show of "O", the Cirque du Soleil production in the Bellagio. "O" is amusing, but having just seen "Zumanity" in May I have to agree with Penn Jillette, who cracked last night that Penn & Teller was quite different from the "twelve identical Cirque du Soleil shows currently playing in Las Vegas." The common theme seems to be lots of tricks, weird costumes, unbelievable stunts, Chinese acrobatics and other contortionism, and the dramatic use of water. "Zumanity" involves less water and more nudity, but to the untrained eye it is hard to say that one is much better than the other.

We go back to work again in six hours, so no pithy analysis tonight, just pictures. As always, click to enlarge. 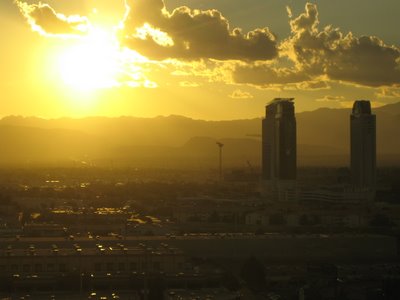 Looking west out the back of the Bellagio

After having gone ten years without visiting Vegas, I have now been here three times in the last 18 months -- always on business -- and will return again in mid-October. No matter how many times I come, I am always blown away by the scale of the place. Caesar's Palace, just next door to the Bellagio, is immense. Here's a corner of one of its buildings, photographed all artistic-like: 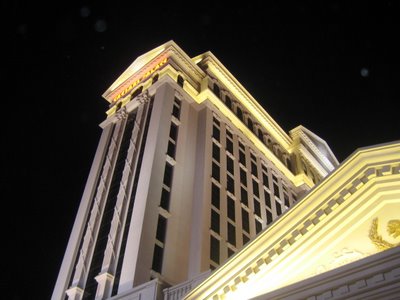 I agree with Penn's comment and your obervation on the Circus de Soleil shows. The wife and I were blown away by "O", the first one we saw. A year later, we were vaguely disappointed by "Mystere". Good luck on your return.

"No matter how many times I come, I am always blown away...."

I just found out the John Lennon Imagine art show is going on there this weekend, I would have loved to see that.