Las Vegas is all about scale, and especially the manipulation of scale. The hotels are vast, larger than anything you would see anywhere that is not Dubai, but half of them are miniature versions of entire cities, whether Rome, Venice, Paris or New York. Mandalay Bay has a simulated ocean, which is particularly strange insofar as the actual Mandalay is quite landlocked. The MGM Grand has a Lion House through which the Great Unwashed walk through plexiglass tunnels, seemingly surrounded by predators. The Bellagio has an indoor courtyard with famous buildings built entirely out of twigs and other wood, set among huge model trains. Here is the U.S. Capitol, in wood: 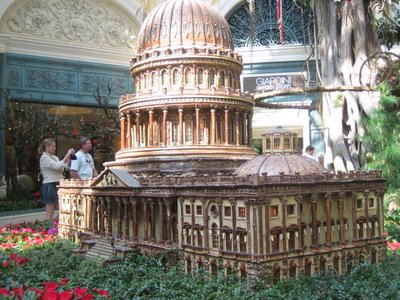 Close up, you can see the wood, and the lights through the windows burning while our wooden Senators conspire to put secret "holds" on important legislation: 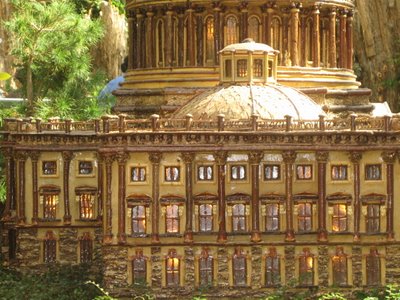 As usual, click on the pictures to enlarge them.

Tonight's entertainment was the "Second City" show at the Flamingo. It was side-splittingly funny, even though the show we saw was not actually "improv," Second City's specialty. Second City bans the taking of pictures and video, which I think is quite unwise. If I had been able to take pictures a few video shots, this post would have amounted to a long advertisement. Instead, you'll have to take my word for it.