Squeezing all the cash out of inventory 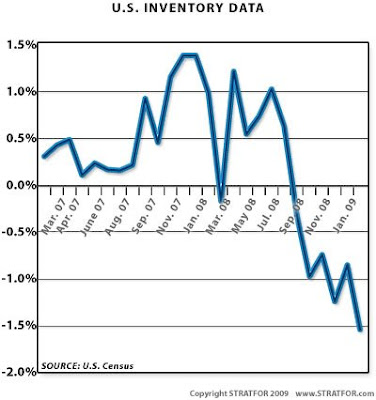 Stratfor's morning letter (subscribe here!) focuses on the dismal GDP report, and in particular the massive inventory drawdown that sucked more than 2% out of GDP. We are in the middle of the largest reduction of inventory in the American economy since records have been kept. This adversely effects GDP, since changes in inventory reflect changes in economic production. The good news, if there is any, is that a big reduction in inventory will eventually force the supply chain (whether stores, wholesalers, or intermediate producers) to restock, and that will drive first longer work hours and then more employment. In other words, a reduction in inventory is a precursor to economic recovery, painful as it is to endure. That this reduction has been so long and so deep already may mean that the bounce back will also be stronger than usual.

In any case, why are businesses reducing inventory so severely? Because of the credit crunch. It takes cash to build or buy inventory (depending on your point in the supply chain), and most companies borrow that cash by one means or another. Well, if banks and other lenders are reducing their exposures to businesses that have less than ideal credit profiles, those businesses will have to get cash for growth from some other source. The easiest and most obvious place for businesses that make or trade in stuff is inventory, which can be liquidated for cash. If the business can replace less inventory than it sells, it will use the surplus cash to pay down loans that cannot be refinanced in the current market.

The question, of course, is whether credit will be available to increase inventory when the demand shows up to justify it.

In the U.S. the best days of our lives are over, TH. America's current problems go back to the 1970s. After the early 1980s, finance guys in the U.S. pulled one rabbit after another out of the hat (leveraged buyouts, venture capital for IT, real-estate bubble, etc.) to keep America's economy going. The finance guys probably have run out of rabbits.

In my view, we have one opportunity left -- turn the U.S. into a tax haven, attacting countless billions of dollars from rich people and successful companies around the world. But U.S. politicians won't do that.

Obama's Hail Mary pass is the "transition to green." But anything the U.S. can do in that area, others can do as well.

As I said in another thread, move to Asia.

The future belongs to people who can adapt easily to change.

P.S. Make that "attracting," not "attacting."

"As I said in another thread, move to Asia."

Having not seen the other thread, could you be more specific? Does Japan count, for instance? Australia?
Philippines? Hong Kong v. Shanghai?

I ask because I had a similar conversation with my wife yesterday...

At this point I would recommend Singapore because of quality-of-life issues, DF82. Everyone speaks English. You can drink the water from the tap. You can safely eat in any restaurant. You have some of the best shopping and some of the best hotels in the world. And you can buzz over to Malaysia or the islands of Indonesia for weekend adventures.

One of my favorite views is Singapore's harbor with 200 cargo ships in neat rows on the water (a typical day).

You can make more money (and spend more money) in Hong Kong. But the pollution problem has gotten much worse over the years.

Wiki summed up the views of expat American investment guru Jim Rogers, who lives in Singapore:
"He chose not to move to Hong Kong or Shanghai due to the high levels of pollution causing potential health problems for his family. However, he is not fully bullish on all Asian nations, as he remains skeptical of India's future." I agree with that.

In the future Shanghai probably will emerge as the No. 1 business center in Asia. Give it a little time.

Australia is nice. It's a little too laid-back for me.

I wouldn't move to Japan or the Philippines right now (unless you have a U.S. government job).

These are personal opinions. It's easy to travel around Asia and find your favorite spots.

Additional reason for reducing inventory: Product price reductions. As the cost of the goods drop on the market, your inventory of same goods should be as small as you can make it.