Chart of the day: Equities for the long haul

When investing, play the long game: 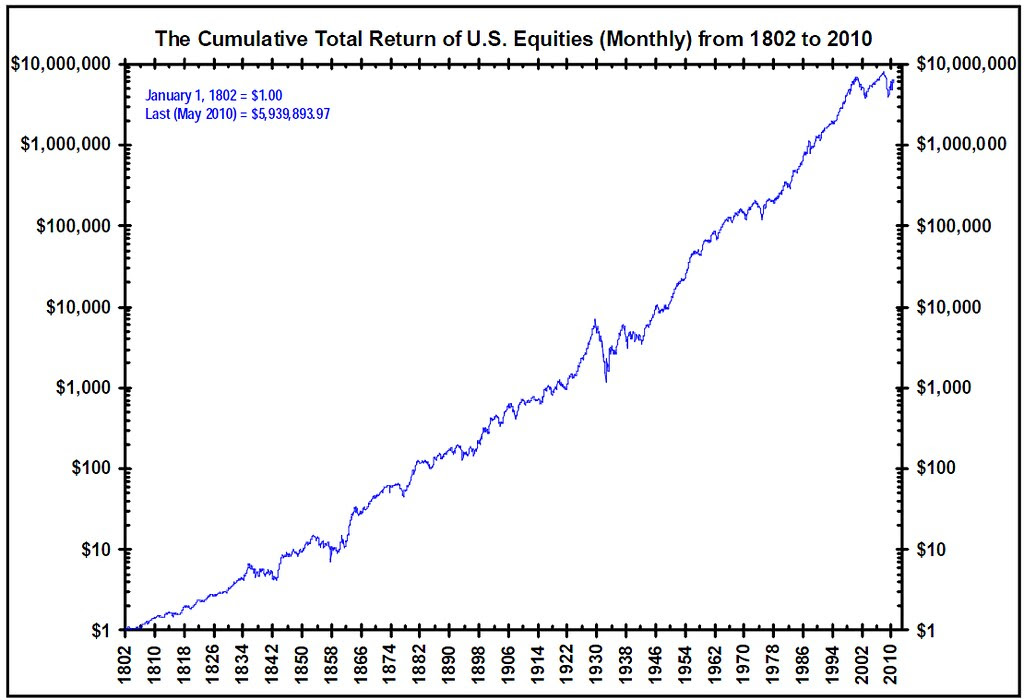 I suspect that the current bear market, which really goes back to 2000-2001, will end up having been a buying opportunity. Unless, of course, you only have a few years yet to live.

It's a little hard for me to figure out how to read the chart. Gains seem to have accelerated somewhat in the postwar era, and a reversion to the 1802-1946 historical trendline could involve a couple decades of stagnation.

I guess if you were really into technical analysis, you might see a head & shoulders pattern starting to develop at the top. It's a long way down! But I don't know how much to trust that TA stuff, especially on long-term stock movements.

Of course, I'm a young fellow with few expenses other than dinners with girls and whiskey for when I find out they're not interested, so I need to put my money somewhere. Lately it's been mid-cap ETFs, as they have low fees and mid-caps have historically outperformed. Plus, you sometimes make money off of an S&P addition.

Adjust for inflation please, or its worthless.

Buy and Hold has traditionally been the mantra of the investment (selling) community. Success, however, depends on when you buy and how long you are able to hold. Many retirement programs are in deep trouble, and people will need that money before we see enough growth to generate it.
Anti-growth, anti-capitalist, and anti-energy policies linked with huge additional entitlements (healthcare) won't get us there.

It's a sad reflection on corporate America.

Anon attorney, two comments: 1) good charts as reminder of how much dividends have mattered historically. 2) why not make your moniker "anon attorney" officially. just sayin'.

Your last post is totally wrong. The chart *should* be logarithmic, which is reflective of year-to-year percentage increases and decreases.

Also, as others have said, it should be adjusted for both inflation (making it go down) and dividends (making it go back up). Again, the most logical way of presenting this is logartihmic showing relative percentage increases/decreases over time.

Another way of looking at stocks is to look at the DJI since the 1929 crash. It has alternated 15-20 year periods of growth and stagnation. By 1949, 20 years after the crash, the DJI still had not surpassed the peak of 1929. From about 1949 to 1966, the Dow grew more or less steadily until it just reached the 1000 mark. It then stagnated until 1982-3, staying more or less flat though with some notable dips e. g. around the time of Watergate. Growth then resumed, strong enough to swiftly overcome the dramatic crash in '87 that now looks only like a larger blip. The DJI plateaued in early 1999, a fact masked by the Internet bubble that took place mostly on NASDAQ. After all the gyrations we are now about where we were in 1999. My prediction based on this past performance is we won't break out of this range until about 2015-6. Now if I could only figure out how to make some money off this!

Note how this pattern shows up much more clearly in a logarithmic than a linear chart.

My parents lived through the 1930's Great Buying Opportunity, but unfortunately their investment funds were limited.

Thanks. I'm in the pessimist camp these days. I believe you'll see the S&P 500 fall back to 750, plus or minus 100, which will place the DJIA at 7000, plus or minus 1000. (After today's close at 9816 we're only 1800 points away.) These are nominal dollars. In real, constant dollars this means investing in stocks will have generated a zero return since approximately 1970. This will effectively wipe out all gains of virtually all living investors.

I don't think it is possible to overstate the consequences of this event. When Americans realize that their 401(k) has a net effective return of zero you're going to see the financial equivalent of blood in the streets. Quite justifiably, investors are going to yank money out of risk assets and into safe havens, including mattresses. I think we are witnessing the beginning of a secular change that will last a generation.