Scary Chart of the Day 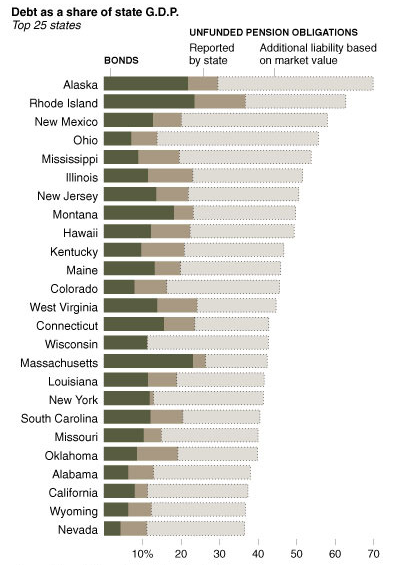 There aren't enough green shoots to get us out of this mess.

I think it is hilarious that Anon at 10:03 highlights the one state that had a Republican Governor. Democrats were in charge of the governor's office or legislature for about 80% of the top 25.

Debt is more or less a problem depending on the offsetting "left side" of the balance sheet. I would switch the position of my own state, CT, with that of Alaska in a moment. In Alaska, they are blessed with extraordinary assets and can sustain debt at levels other states cannot.

The states with true problems are those from which revenue generating businesses and people can flee. See: CT, RI, NJ, IL, MI, NY.

In this same way, while CA's situation appears to be among the worst, they've got assets they could better use if they finally summoned the will to address their problems.

In all cases pension promises have far exceeded the states' ability to pay. It's a time bomb that will put tax payers directly in conflict with public employees, and it's likely to be a defining political theme over the next decade.

It is interesting that Rhode Island is once again in debt. I say 'once again' because this state's debt and bailout was one of the reasons for our Constitutional Convention over 200 years ago. I blogged about it here.

Can we get the origin of that chart? Kansas should be on it from their ongoing long-term KPERS pension issue. Heck, NPR said so, it must be true.

We need a constitutional amendment banning defined benefit plans for government employees. They are little more than a means to tax posterity -- either literally or through inflation -- without representation.

Read this on ZeroHedge too, CV. All U.S. States and local governments with defined benefit plans are in fiscal situations perfectly parallel to the PIIGS--they have debt obligations denominated in a currency that they do not control.

There's only one way out of this, and if you read ZeroHedge you know that the plans are already being floated in Congress. Under the guise of "retirement security" the federal government will nationalize these pension programs and to give the system the appearance of solvency they will require 401k investors to invest a portion in treasuries. Welcome to the USSA.

I live in Colorado and have watched the state government attempt to seize the assets of Pinnacol Assurance, which is referenced in the ZeroHedge article. Pinnacol was established by the state to provide employment comp insurance in Colorado to high-risk companies that were not being served by the private market. The statute that established Pinnacol specifically provides that (1) the state has no claim to monies collected by Pinnacol; and (2) that excess reserves must be refunded to policy holders, just like a mutual company.

For reasons that are unclear, Pinnacol has managed to accumulate $2 billion in reserves. The state is now negotiating with Pinnacol to give the company complete operating autonomy in exchange for a one-time payment of $300-$500 million. It is the most egregious example of corporate fascism I have ever witnessed. Neither of these parties seem to realize (or care) that this is NOT THEIR MONEY.

There's a political fault line between those who get government checks vs those who pay for them. Until now both parties have straddled this fault line, although Republicans have professed not to. Many in business profess to be on the private side of this fault line, but aren't ... e.g. GE's CEO Immelt.

Government has gotten too big, and wants to get bigger. But it's unsustainable, because unfundable. The federal part is what most needs to be cut. States then need to clean their own houses.

Independent voters are waking up, which is a start to a political solution. But this won't be easy to work through.