Via the ever-watchful Bomber Girl, another strange photo choice from the dude who edits the White House Facebook page. 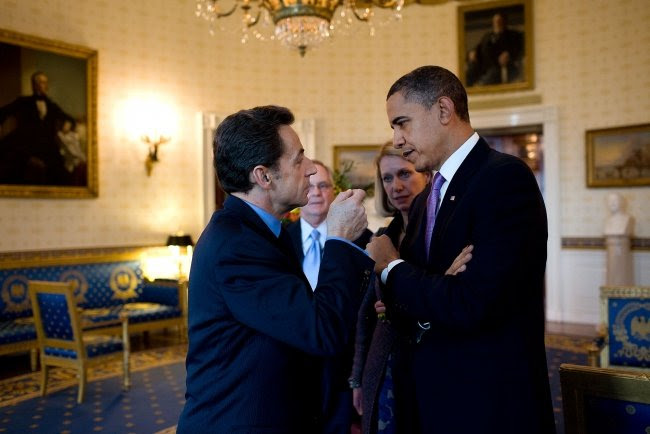 Photo of the Day: President Barack Obama and President Nicolas Sarkozy of France have a discussion in the Blue Room of the White House before their joint press availability, March 30, 2010. (Official White House Photo by Pete Souza)

Really? That does not look much like a discussion to me. What do you think is really going on?

Will you at least send me in a sandwitch when you leave for dinner?

In preparation for their joint press conference, President Obama and President Sarkozy could not break the Rock/Rock tie in an epic Rock, Paper, Scissors match as to who will take the first question at the aforementioned press conference.

Something about Carla Bruni's nipples.

President Sarkozy describes for President Obama's education the size of the Iran sanctions the UN will allow the US.

Anonymous 11 - Yes, a very typical shot unlike any we have seen before with any other US president.

Given how Obama has treated others, I guess this means France is an ally.

Michele told Carla that it was only this big. No wonder you can't deal with the Iranians.

I think Obama is trying to understand what Sarkozy says in French, rather than wait for the translation.

Another one in the series of Obama on the job training.

This time, Obama is learning firsthand about the perils of engaging the Frenchman on the subject of "les escargots".