Do orange and purple really go together? I have my doubts, but for the sake of the TigerHawk Teenager I'm willing to go with it. I even have a "VTDad" decal on my car and had to buy an orange and purple sweatshirt yesterday because it was so cool. People are going to talk. 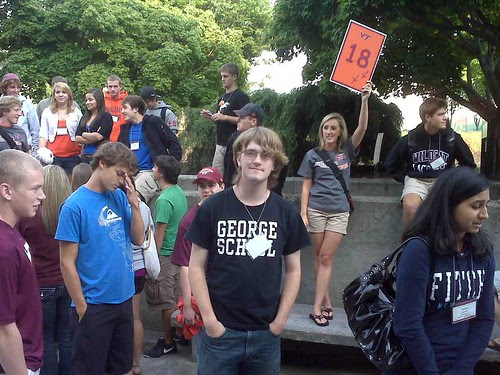 Yes, the ThT and I are in Blacksburg for his orientation, which fact accounts for the light blogging yesterday. My excuse for Saturday and Sunday is less grand -- simply the first really nice weekend weather we have had all summer. Saturday I rode my bike from Princeton to Lambertville, the quaint little be-antiqued town just across the Delaware from New Hope. It turns out that the route includes a great many hills that are not so obvious from inside a car, so by the time I made it home I had put in 44 hill-and-dale miles and was much the worse for wear. Only Advil and India pale ale at the Triumph Brewery kept me from turning into a ball of pain.

Anyway, back to Blacksburg. The ThT had been on a "road trip" to Florida, and through the magic of GPS actually connected with us in Blacksburg at the appointed hour, an impressive feat of driving and punctuality. I hit the road a little after six yesterday morning and got down here by three in the afternoon, which was decent time in light of the massive amount of construction along the way. It seems that President Obama's stimulus money is making itself felt on interstate highways all over. Route 66 west from Washington to Front Royal passes through Gainesville, where construction crews have narrowed it from four lanes to only one for no obvious reason other than their own safety. Selfish bastards cost me an hour. But the drive also had its great moments: Interstate 81 in the Shenandoah Valley must be one of the most beautiful roads in the eastern U.S., and yesterday it was especially so. The mist hung mysteriously over the little dales in the Blue Ridge; you could almost picture the moonshiners at work under its cover.

Blacksburg is a very nice college town up in the Appalachian foothills, and it is so cool here that I had to buy that sweatshirt just to stay warm. Sort of remarkable weather for the 20th of July just 100 miles from Tennessee, but I'm sure Al Gore has an explanation. The campus is attractive -- not spectacular, like the University of Virginia, but better than average among the state tech schools I've seen. The THT should like it well enough here, or even more than that. You do not meet many indifferent Hokies, which speaks well for the place.

Virginia Tech is famous for a number of things in addition to spontaneous insanity, among them its excellent cafeteria food. We had dinner in Dietrick last night -- late afternoon, actually -- and dined on quite delicious beef fajitas, refried beens, and chips drizzled with a sort of cheesy chipotle sauce. If you did not want that you could have Asian or Italian food or hunks of meet grilled under the influence of various seasonings. It actually lived up to its billing, and a far cry indeed from the Princeton "Commons" of 1979. Of course, virtually all food everywhere is better than it was in 1979, so the "kids today" are probably a lot more demanding than we were. It s still nice to know that your kid won't be living off of Ramen noodles and peanut butter.

If all goes well today we will roll north around two this afternoon, which ought to get me home well before midnight even taking the stimulus package into account.

All good things to the Tigerhawk Teenager....and Wahoowa!

Stop thru Staunton on the way back. Nice town. Woodrow Wilson stuff's a little overrated there. Great library. Antiques, crafts, bistro, crunchy granola scene sort of like Charlottesville-lite. Might as well take your time, because DC traffic will hold you up anyway.

Make sure he takes Nikki Giovanni's Literature/poety/composition classes. Nikki will squeeze all that wingnut juice out of him, thank goodness. lol

She being an upperclassman, that would be impressive. Along those lines, however, a day on this campus did make me pine for the missed opportunities of my youth.

TH a little side note about the food at Princeton; when I was a high school senior I had been recruited by the football coaches at Princeton. One of their more compelling differentiators for Princeton was that it had far and away the best training table of the Ivies. Now it could have just been the angle that this particular coach and former Alum took based on the fact that they walked into my house and saw my nine other siblings? But it was the food at Princeton that they were boasting about...

My own advice is to go to class every day, no matter how little sleep you got the night before. Having been admitted to school, stay there!

Having just driven 8,000 miles to and through the southwest, not much stimulus money is being spent on roads west of the Mississippi. In fact not much is being spent west of the Appalachians. Only road construction worth noting was near Memphis through Arkansas, Las Vegas and St Louis.

Please don't discuss 81 any more. There is enough traffic on it already. If I wanted to drive on 95, I'd live in Princeton.

Dudes, we have no moonshiners here in the Valley of the Shenandoah. That is one of those lingering myths....VDOT restricts the lanes on the local roads so the non-residents may enjoy the scenery longer...

Clemson is orange and purple.

VT is orange and maroon.

My lovely niece will be a freshman at Tech this year.

Good for the TH Teenager. Question for the ages, what will you call him when he's out of his teen years? The TH Twentysomething? :p

ThT is a dead-ringer for his father 30 years ago. Great hair!

And as a non-football player at Princeton, I was always sort of peeved that football players got special food. I guess I'm lucky that I didn't go to a real football powerhouse where it must be worse. Maybe the squash players and fencers at Princeton get special treatment....