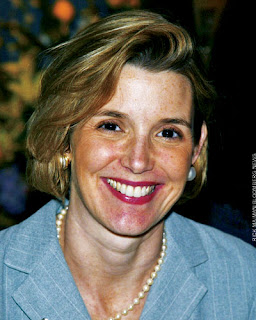 Eliot Spitzer, the disgraced former governor of New York and bane of Wall Street, and Sallie Krawcheck, the former chief financial officer who made Citigroup what it is today, have teamed up under the auspices of CNN to "take on Wall Street." It is hard to imagine what we might possibly learn from either of them, except maybe that a smart and ruthless prosecutor can use the Martin Act to do just about anything. It is also hard to imagine why Sallie Krawcheck would want to depreciate whatever cachet and credibility she has left in the corrosive company of Eliot Spitzer, who desperately needs somebody to take him seriously. It is, however, much less difficult to imagine what Spitzer sees in Krawcheck...

When Eliot was NY AG there was a pattern of his friends getting placed into high positions as a condition of his settling charges. Sallie got hired into a high position at Citigroup as part of an Eliot settlement. Ergo, Sallie was/is a friend of Eliot ... but I didn't know until this day, that it was Barzini all along.

Eliot actually won a Supreme Court case recently as it decided that state attorney generals can investigate subsidiaries of national banks. Lest we forget, this case started over Eliot's wanting to pressure national banks to make more subprime loans to minorities. Expect Eliot to morph this into his winning victory for "50 more watchdogs for the public interest."

I thought my cnynic barometer couldn't read any higher.

Eliot has no future as a talking head. There is a market for pretty blondes -- so hope for Sallie yet.

I kid you not, but the producer is scheduled to be Paul T. Barnum. Good DNA in that family for circus spectaculers.

This current and lengthening, enduring depression was exactly caused by government meddling in Washington DC, New York, California, Arizona, Texas, and NM when they forced subprime mortgages on banks. The government, against good sound economic standards, in the hope of gaining political capital and votes caused this subprime meltdown.

I find it hard that anybody would take any government official serious anymore. Wall Street has its problems but it was Fannie and Freddie Mac, quasi-government entities, pressured by the likes of Barney Frank that caused this mess in the first place.

That a former gov official who caused this mess is going to run a financial talk show is ludicrious. It's not Wall Street but the Government of leftists that need watching. It is people like Spitzer who know nothing about economics 101 but everything about political correctness and gaming the system that are the problem.

What Rush Limbaugh hints at is that the powers that be want to crash Capitalism and disprove it but this current mess was caused by BOTH Wall Street and our very own Government. The two together combined is what caused this mess.

I very much agree with Wheeler.

Fannie Mae got started under FDR in the 1930s. Ironically, it wasn't created to promote home ownership -- FDR had other programs for that -- but was instead intended to improve small bank liquidity. The idea was to turn the most fungible bank asset -- seasoned mortgage loans -- into cash that could be relent to business.

Fannie Mae was privatized (sort of) because LBJ needed to hock assets to pay for the Great Society and the Vietnam War. This was before we got the federal dollar printing press really humming. Freddie Mac was created at the time so that Fannie Mae would have a pseudo-competitor.

The root of all current evil starts with Fannie and Freddie and securitization. Fannie and Freddie were supposed to bundle mortgages and sell them off. They weren't supposed to have big balance sheets. They used a loophole to create trillion dollar balance sheets. They never could have gotten that big -- with better than 30:1 leverage -- were it not for the implicit federal government guaranty. Heads they win, tails we lose.

If Fannie and Freddie had stuck to plain vanilla mortgage product all would be well. But it all got perverted. Warren Buffet rode the Fannie/Freddie gravy train for a long time. He bailed out when he saw how Fannie and Freddie were getting increasingly politicized and taking on unacceptable risk.

I still can't get my head around the following fact -- in 2006 the average down payment in the US was only 3%. Not for subprime, for all mortgages. We threw out a hundred years of established lending practice and rolled the dice. Around 2002-2003 Moody's and S&P lowered their rating criteria to enable this -- they do so on the basis of a couple of years of data when defaults didn't happen because rates were low and real estate markets rising.

Fannie and Freddie are still the 800-pound bastard gorillas in the room. I have yet to hear how we're going to fill the gap formerly covered by the $2 trillion per year securitization market. Is the Fed just going to buy Fannie and Freddie paper?

If you look at the very last version of Energy there's stuff in there about using Fannie and Freddie to finance Obama home improvements to make homes more energy efficient. Be afraid.

When the dot.com bubble burst most of the losses were just paper losses. Compare what just happened -- a lot of what got lost actually ended up in some people's pockets.

But, come to think of it...it would be a subtle difference, wouldn't it?