Grim economic chart of the day

Last week I stumbled across the following chart in a deck of slides from J.P. Morgan. It basically shows how much economic growth would be required to return the unemployment rate to "only" 6% -- recognizing that we had grown used to it being under 5% -- over the next one to three years, given a "starting" unemployment rate at the end of this year. It goes some distance to explaining in graphical terms why the Obama administration has thrown anything and everything into stimulating the current economy. 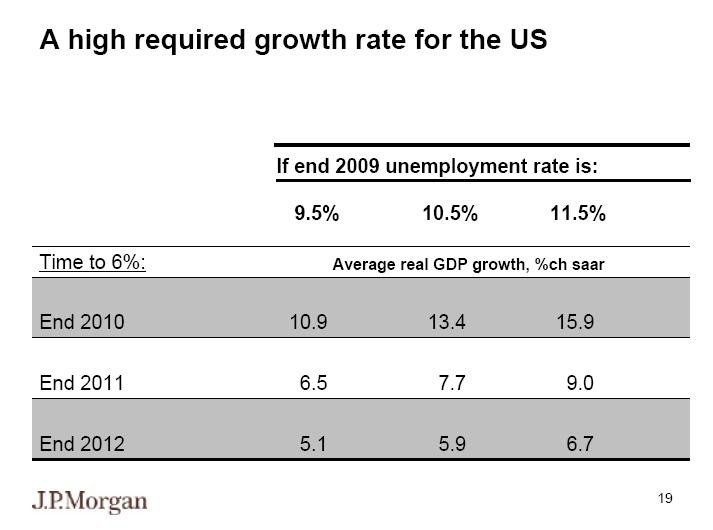 Well, yeah. But the administration hasn't really thrown everything at the economy -- only a small percentage of what they've allocated.

It'd be interesting to see a graph that shows how long it takes for what they're "throwing at" the economy to help.

Anonymous:
the relationship between economic growth and employment implies (but doesn't state) the economic fact that jobs are only created when growth outstrips growth of the money supply (ie inflation).

What this chart is saying is that massive growth relative to the amount of future inflation is needed to reduce unemployment.

If it weren't for 'what they're throwing at the economy' this chart would have much lower required growth numbers to achieve these employment levels.

Nothing they have done or plan to do will grow the economy one bit, only government.

The administration hasn't thrown anything at "the economy". They have, however, thrown significant amounts of future money (in present time) at their handlers, supporters and cronies in the liberal activist community.

When the Government spends, it must first tax. Even by inflating the currency they decrease the value of money already in people's hands.

Regulations require compliance, and money spent on them is a form of tax. Those who do not comply and are not penalized (like the Treasury Secretary) gain an advantage over honest.

Alas, there is no "do no harm" oath that our politicans take. The crooks are brazen and are in charge.

Look at that image... REAL HARD... then remember that some people think the following:

"taxation is a necessary evil that finances the services that make for a fair and dynamic society."
http://www.prospect.org/cs/articles?article=the_next_tax_revolt

I disagree with J.P. Morgan's analysis. I don't think that the US will ever reach 6.0 percent again. The expansion in the welfare state is diminishing the desire to work and higher taxes and more regulation (the Lilly Ledbetter law) are raising the costs of hiring people.

Maybe 6.0 percent is you include people workig under the table...but never again in the official statistics.

May have overlooked the demographic fact that Gen X is 9 million people short of the Boomers. As Boomers leave the employment rolls there will likely be more jobs than available employees. Employment wise, things should balance out in the next decade or so.

Rising unemployment and a Democratic Congress correlate fairly well since 1990 or so.

Obviously, this is the fault of the Buh/Cheney administration. After all, the massive spending and proposed tax hikes from Dear Leader could never have created this problem.

It would be very easy to stimulate the economy, and achieve high growth. Here are 8 ways to do it.

Of course, these require a belief in free markets.

> As Boomers leave the employment rolls,

their skills leave with them, and they change from tax payers to tax receivers, putting an ever greater burden on Gen X. An inverted age pyramid NEVER leads to economic growth or increased employment.

"Boomers leave the employment rolls there will likely be more jobs than available employees. "

What a dumb statement. Such economic ignorance is why we have these troubles today.

I bet you think immigration is bad, since it 'takes jobs away from Americans'.

Zero-sum stupidity, at its worst.

"May have overlooked the demographic fact that Gen X is 9 million people short of the Boomers. As Boomers leave the employment rolls there will likely be more jobs than available employees. Employment wise, things should balance out in the next decade or so."

As boomers leave the workforce, they are being "replaced" by lower skill/education/productivity immigrants and output of our poor school systems.

It explains how Stimulus morphed from promised infrastructure spending into "investment" into human capital, even though men have lost 80% of the jobs in this recession.

As others have suggested, it would be nice if this were true. The administration talks as if this were the case, but doesn't govern that way.

Most of what Obama's actually pushing hardest for is actually bad for the economy, at least in the short term, and in my opinion in the long run as well. But there's no plausible way to argue that massive borrowing that doesn't get put back into the economy for years is stimulative, or that healthcare "reform" that simply imagines cost savings will be found, will actually help the economy.

There's a case to be made that many of these moves are sound policy on other grounds. But in no way do they help the U.S. economy.

There's a case to be made that many of these moves are sound policy on other grounds.

There is??? I haven't seen one. No country in history has spent its way out of an economic downturn: the traditional remedy is to cut taxes and lower interest rates to stimulate economic growth, thus creating more jobs immediately. "Saving or creating" umpteen million new jobs after some nebulous date in the future, as Obama has been claiming, is ridiculous.

The CBO analysis of ObamaKare version 0.83 (or whatever they're up to now in committee) paints a stark picture of how useless nationalizing healthcare will be: Only about 1/3rd of the uninsured will be covered and it will cost an average of $833 per person per month. If that person went out and got an HPA today it would cost him an average of about $250/month. In essence if Obama gave every uninsured American an HPA it would FULLY insure America and cost about the same as ObamaKare.

The President, uncomfortable with all this "governing" crap, has decided to go back into campaign mode. He thinks the country needs to get enthusiastic and fully sign on to his plan to destroy what remains of our economy, to the plans permitting Iran to blow up Israel and to allow North Korea to test their new ballistic missiles with nukes attached, instead of the faux tests they've had to settle for up till now.

He'll announce his new campaign efforts tomorrow in a Rose Garden press conference, and the press is reporting that administration political hacks have already come up with a new slogan: it will be "Yes, we can!".

I know, I can't believe it either. He's just so over his head.

I used to think that one could have an IQ of 80 and still be a leftwinger, but it appears now that the IQ ceiling for voting Democrat has dropped to 70.