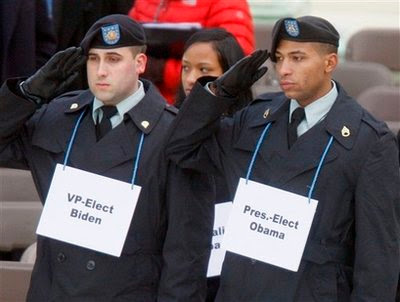 The original caption to this photo:

Army Spc. Nicholas Rupple representing Vice President-elect Joe Biden and Army Staff Sgt. Derrick Brooks representing President-elect Barack Obama salute during the playing of the National Anthem during a dress rehearsal for the Inauguration Ceremony at the US Capitol in Washington, Sunday, Jan. 11, 2009.

Seriously? I think you can do better.

"Coincidental, purely...the height similarity, that is."

I have my doubts that either Obama or Biden will salute. I'm betting on interlaced fingers held at groin level. A subjective sign of dismissal.

Who cares? I wanna know who's the hottie behind them?

I wanna know who's the hottie behind them?

Given the casting decisions, I think it is obviously "Michelle."

Two US servicemen demonstrate the proper salute for passing coffins draped in the US Flag, in preparation for the incoming administration's soft stand on terrorism, the closing of Gitmo, and the appointment of weak hands to the offices that'll enact/change/repeal policies & laws that have kept us safe these past 7 years.

Psst! Isn't this cool, we get to play Army guys.

"That's not Biden and Obama. We better ask Spider-Man to find and rescue them."

U.S. ARMY EMPLOYS ABU GHRAIB TACTICS ON ITS OWN SOLDIERS.

Two of our nation's finest contemplate their new albatrosses.

The "hottie" in the back can't represent Michelle, because you can clearly read "-ali-" on her paper. Could be "P-ali-n". Wouldn't that be one big surprise?

Except that the first line of the text seems to be position, rather than name.

Good point, Candide. She is probably meant to be one of his daughters, Malia. So we should all feel guilty about referring to her as a "hottie."

From the Encyclopedia Galactica, est 2095A.D.

Jan 20, 2009 3:22 P.M.: Forced to improvise when Joe Biden got the President-Elect hopelessly lost in D.C. Traffic, Supreme Court Justice Roberts swore in two random members of the security detachment. By the time Obama and Biden were found a month later, the two stand-ins had been so successful that the 28th amendment to the Constitution had been passed and ratified, setting up the Presidential Lottery system that has served this country well for almost a hundred years...

I have no idea who those guys are, but I would give anything if they could become the actual President and Vice President instead of Obama and Biden.

Washington DC (November 23, 2010) (AP): With unemployment at 22.3%, mired in deeply unpopular wars in Pakistan and Belize, and under siege by a livid US public and media 24-months into a botched administration, the Obama White House today unveiled their new "executive stand-ins (TM)".

The press was directed to consider the "stand-ins (TM)" as fully representing the administrations views and policies on any and all questions "...you guys want to ask them. Just leave us alone for God's sakes".