I took this picture one hour ago, also with the camera in my Blackberry. Sent it to a friend, who responded that it is John McCain's next house. I increasingly think not, but perhaps that is my mood talking. 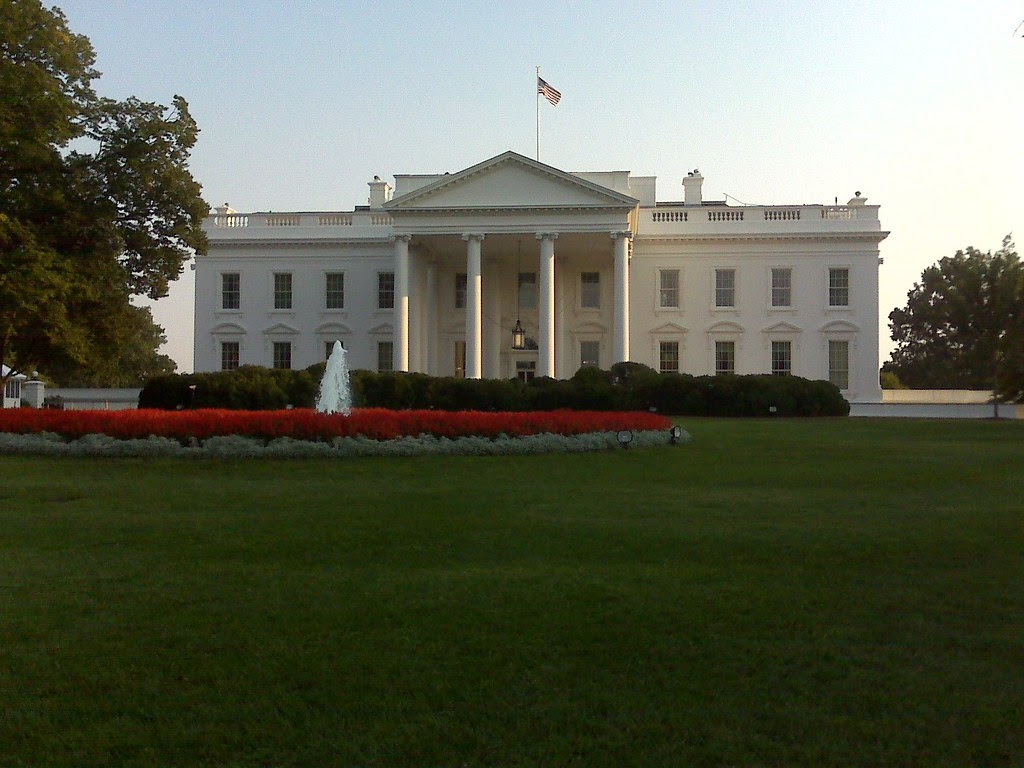 "I increasingly think not"

Okay, let's look at the news today. You do the arithmetic.

"There is little change in the Gallup Poll Daily tracking results covering Friday, Saturday, and Sunday interviews, as Barack Obama leads John McCain by a four percentage point margin among registered voters, 48% to 44%."

"Six percentage points is the price Barack Obama could pay on election day for being black.

"That disturbing calculation was found in a groundbreaking new Associated Press-Yahoo News poll conducted with Stanford University which probes the effect of the Democratic presidential candidate's race on his historic campaign for the White House."

Rush Limbaugh has often similarly commented that Obama will loose if he doesn't have at least a 10 point edge on election day.

Rush, may not be a racist but the many on-air repetitions of the same idea can only encourage many of his bigoted listeners, which is probably a sizeable percentage, to feel justified in their bigotry.

Well, it is 2008 and it is time for Rush and other Republicans to deal honestly with Obama man to man. If you don't like Obama's ideas, don't vote for him for that reason.

But, remember Patrick Henry: Even if you do not support Obama you should be a true patriot and support his right to run and to win or loose based on his ideas and not the color of his skin. Any other action would be completely unpatriotic.

Great Fourth-of-July speech, pdiddy. But it doesn't change the numbers.

And for future reference: Very few regular commenters at this blog care what Rush Limbaugh thinks, says, or does. Most of the people here draw their own conclusions.

"many of his bigoted listeners, which is probably a sizeable percentage, to feel justified in their bigotry."

There is absolutely no way to prove that statement; it just reinforces caricatures of conservatives as a mob of cross-burning rednecks.

Anecdote: I've seen as much or more anti-white racism in my life than anti-black. I'm a Texas Republican with redneck roots.

The people on the political left don't understand the folks in about 40 states. That's why they lost five of the last seven Presidential elections. The Democrats won the other two because they ran a somewhat-centrist guy from Arkansas who could go in for the kill after Pat Buchanan and Ross Perot had severely wounded the prey.

In the case of the AP-Yahoo News poll, the AP said in its story: "More than a third of all white DEMOCRATS and independents — voters Obama can't win the White House without — agreed with at least one negative adjective about blacks, according to the survey, and they are significantly less likely to vote for Obama than those who don't have such views."

In an election everybody has to deal with the way the country is, not the way we would like it to be.

Where did you grow up in Texas, DF82?

Based on the economic turmoil of the past ten days, the goose is cooked, so to speak.

Whatever happens, the 'incumbent party' is cooked. Bail out, non-bail out, asset swap, whatever you want to call it. When normal people around me start talking in terms of vengeful class war economics, the outcome is foretold.

Interesting that one of the single people most responsible, Barney Frank, who fought against regulating FHA and FMHA more closely, tooth and nail, will bear no penalty for this, and will still be spouting his reckless populist garbage from his perch in the House in the next Congress.

I REALLY hate that guy.

"Our economic problems are concentrated in the finance sector, and that's the part of the economy the average voter knows least about.

"During financial disaster week, Barack Obama took the lead over John McCain in national polls, by 2.3 percent in the Real Clear Politics average. But the reshuffling of the political deck seems to have opened up more states for McCain and have closed off some states for Obama, specifically, in the northern tier of the country: call it the Frozen North. Wisconsin, Minnesota, and Washington seem to be in play now."

I wouldn't give up hope just yet...

The voters like McCain and Palin when they get to see them directly -- not so much when all they see is the filtered version on the nightly news.

I expect McCain to take the lead back in the debates. The question will be whether he can hold onto it through three weeks of relentless media noise. I assume (i.e. hope) that he's built up a good warchest to use for ad buys during those weeks in the swing states...

Wouldn't count him out yet. The election's basically tied -- that's an extraordinary accomplishment in a year that started out with such a clear Democratic tide and where the economy will be issue number one...

DEC: It's DF82 autobiography time. I was split between Corsicana, TX, (10 years) and Beaumont, TX. (9 years) Both had disproportionately large black populations. (Beaumont is 46% and Corsicana is 24% according to census data)

I can't tell you how many times I or someone I know was the target of anti-white racial insults. ('honkey' was a favorite, as was 'fuckin' lil' white boy') They did it because 1) they learned it from their parents (seriously, how many seven year olds [which is the earliest I remember these problems] develop racist attitudes themselves) and 2) they could get away with it. It was accepted as a fact of life that you couldn't stand up to this like your daddy always told you to because if you popped one obnoxious black kid in the mouth, all of his co-ethnics would show up and beat the hell out of you if not then, then later. There was even a double standard in enforcement; the teachers and other adults looked the other way or pretended not to hear when the black kids insulted the whites, but if a white kid responded with 'nigger,' *whoosh* off to the principal's office and a few days of detention.

In Corsicana, there was a significant problem between Hispanics and blacks as well, but I never had a particular problem with the Mexicans. Though I did have one friend a year ahead of me named Jose' (naturally) whose house I couldn't visit because his dad hated white people.

I personally had fewer problem in Beaumont, but the city had a reputation for high black-on-white violent crime. One girl from my High School was murdered by black intruders into her home only a week after transferring to the school. The whole area has suffered from a severe case of white flight since about the mid 90s.

Later on, when I was a college student in Austin, I was harassed out of a job (night stocker at HEB) because I was the only white guy on a crew full of Mexicans. That's when I joined the Army, where I was treated to the sight of black recruits who refused to obey white Drill Sergeants. (an apparently common phenomenon, since every single team of Drills I've ever encountered anywhere has at least one black NCO in it)

So no, it's not hyperbole. I really have seen more anti-white racism than any other kind. Which explains why when these kinds of discussions arise, especially about the perpetual latent racism of whites, I'm so bitter and pissy.

Was your high-school principal a former pro football player? (If so, he's an old friend of mine.)

Hmm. Our superintendent had a Superbowl ring, but I can't remember his name. (I never met him) Maybe he got promoted?

The media could still deliver the WH to Obama. I am still amazed they get a free pass at blatant electioneering pieces that would legally be in-kind donations if done by anybody else.

The Gus Holloman who played for the New York Jets (with Namath) and the Denver Broncos. That was the one who became superintendent.