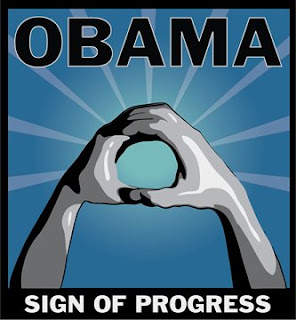 I have a few issues -- six, actually -- with the Obama campaign's new "O" salute.

First, it is unsafe. Suppose, for example, you have climbed up a tree to get a glimpse of the Imperfect Vessel at one of his vast rallies, and you are suddenly overwhelmed with the need to salute along with the cheering masses. You need both hands to make the "O" salute so -- naturally -- you let go of the tree and crash to the ground below. As any Democratic trial lawyer will tell you, it is reasonably foreseeable that would happen.

Second, it is inconvenient. How the hell am I supposed to do the "O" salute while I'm thumbing my Blackberry trackball?

Third, it discriminates against one-handed people. I think the Obama campaign needs to make a reasonable accommodation for people who have lost one, but not two, hands.

Fourth, it looks like a "zero." Or an empty vessel.

Fifth, there is the Star Trek thing. I think it is cool, but I am hardly the ordinary swing voter.

Sixth, do you really want people to be thinking about donuts?

I'm sure you can think of other problems with the salute.

It is frighteningly ... oh, Orwellian, somehow. It is weirdly cult-like. Combine this with the fanaticism of his followers, and hell, I'm spooked.

If you look at the way the space of the graphic is composed, it looks like a guy with a halo (area under the thumbs = torso, area enclosed by hands = head).

It looks like those poster of my youth. You know, the ones from Stalin and Schickelgruber.

This taken from the opening sequence of the movie '1984' with Richard Burton. While holding this 'O' sign the crowd chants 'B'...'B'...'B'. I do hope somebody can get this up on U Tube.

Looks like somebody getting ready for a big session of manual self-satisfaction. Which I guess is appropriate.

There is a clip on YouTube of the Burton 1984 movie opening sequence. While it's a 'two-handed' salute, it's not quite the same as the Obama salute. However, the motivation is the same. :-)

If Obama is elected, look for sponsored Two Minutes Hate against Republicans.

While the symbol they use in 1984 is not the actual "O" symbol. The enthusiasm is the same and the siumilarity is eerie to say the least.

If they start talking in BlackWhite and implement CrimeStop then we know we are ALL in trouble.

It's so overdone. A simple thrust of a flat palm, forward and upward with a sharp click of the heels is sufficient in my view.

Is is it ever possible when the nation has gone into such a steep decline: jobs, deficit, an endless war, devalued dollar, housing slump; lack of health care and on and on--that those of "that party: can do anything but make child-like remarks about things of so little importance instead of asking what their professed party/candidate will do to make our nation great again?

No hands, just show him your O face...

The sun and rays remind me of the Japanese flag of WWII. Maybe we'll get a mix if Axis powers from WWII in Obama.

For the less intellectual, this O hand signal is more similar to Ohio State's O, from the OH-IO chant.

Maybe it will get him votes in Ohio, but Michigan and other places will be less than enthused.

Isn't that the international sign of wanting to choke someone to death?

instead of asking what their professed party/candidate will do to make our nation great again?

So explain to us how a creepy quasi-fascist salute will "make our nation great"? Or is it just the ithought that we are making fun of The One™ (pbuh) that bothers you?

Speaking of creepy, will we next be seeing armbands with the Obama campaign logo on them?

Looks like the south end of a north bound horse to me...

one ring to rule them all?

One-handed? No problem ... be seeing you.

It takes two hands to handle the whopper baby!

Actually, it looks most like goatse, and no, I'm not putting a link in here.

"Looks like somebody getting ready for a big session of manual self-satisfaction. Which I guess is appropriate."

Not for me. Way too small.

What is the sound of a one-handed "O"? In some countries it's the same as giving someone the finger:

"The OK gesture used with the forefinger and thumb to make a circle has several meanings in many countries. In Brazil and Germany it is very rude, and would be like giving somebody the middle finger in North America. In Japan, after purchasing something you would be telling the sales clerk that you would like your change in coins. In France the meaning is negative but not insulting, it simply means "zero" or "worthless.""
(American OK Gestures)

When I was in Saudi Arabia, they told me the OK hand sign meant asshole.

Is it just me or do all Obama's posters have an Eastern Bloc look to them?

It doesn't discriminate against one handed people at all, they have an option as Tony Blair demonstrated way back in 1975 -- the first O supporter!
David

So, we now have an official salute...remember the last one...HEIL, HITLER!!!!