Among many curious moments in Barack Obama's speech in Berlin on Thursday, this line takes Gorean liberties with the facts:

As we speak, cars in Boston and factories in Beijing are melting the ice caps in the Arctic, shrinking coastlines in the Atlantic, and bringing drought to farms from Kansas to Kenya.

In any case, as we write, Barack Obama is just wrong. Sea levels have been declining, not rising, for the last two years. 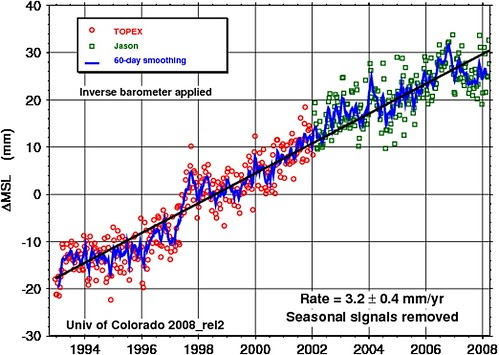 What about drought to farms in Kansas "as we speak"? Again, not so much. With the exception of one "moderately dry" area in the southwest, this year (at least) Kansas has been normal to "exceptionally moist," depending on the part of the state you are talking about.

You don't suppose there is any chance the press will check his facts "as it reports"?

No guarantees that they won't, but it is the way to bet.

wow, your inability to read data is amazing.

1. shows a definite TREND towards rising.

2. Precipitation for 6 months is meaningless - show data for the past decade, to see if a TREND also emerges.

Of course, Barack Obama was not talking about trends. Had he done so, Anon 4:24, you would be very right to call us out. He was talking about present circumstances. Two of the examples he cites -- sea levels and precipitation in Kansas -- were very poorly chosen. Sea levels, because a long trend has actually been broken in the last two years, and principled scientists are beginning to wonder why. Kansas precipitation, because (1) it has been far from dry recently, and (2) nobody has a clue what will happen to precipitation in Kansas under pressure from AGW, even if it unfolds as the activists claim.

show data for the past decade, to see if a TREND also emerges

Were the "dust bowl" years a "trend"?

If so, what triggered them?

Obama is correct that over time, coastline are disappearing, but this has been happening for 10,000 years.

Then you have parts of the world where it is the land that is rising. Under and around the Baltic Sea for example. As time goes by the volume of the Baltic is shrinking. In the centuries to come cities such as St. Petersburg and Helsinki will become inland cities, and new land for settlement will open up. Dividing up the land between the various countries is going to be fun.

Then you have Antarctica where the rebound could be spectacular.

Im not sure you could have chosen a better chart to undermine your sea level point. Looking at that chart the ONE thing you can say is the trend is downward, eh?

Hey look, no evidence that gas prices are up either!

Obama did not say "as we speak sea levels are trending upwards."

And he picked Kansas because it's one of those states in the middle. He probably couldn't find it on a map, most Germans don't care, and...well, no one important lives there anyway.

Amen. In central Kansas our "drought" was ten inches above normal for the year by June. I spent time pumping some of it out of the yard--the ground was too wet to absorb it.

Zoot alors! How can this be? Why would Obama say YESTERDAY that the oceans are still rising and that droughts still occur? Why, I remember in his magnificent victory speech over Hillary, he proclaimed "This was the moment when the riiiiise of the oceans began to slow, and our planet began to heal."

The Angel Obama can not contradict Himself, his magnificence must have caused a rift in the time-space continuum.

Btw, how do Pope Gore's new 10 year plan work? We only have 7 years left until global warming destroys humanity. Shouldn't he have announced a six year plan?

Obama picked Kansas and Kenya because they sound good together and mostly because both locations have something to do with him.

Enough of this guy's manufactured bio (Obama actually has nothing to do with Kansas even though he often pretends he does). But do expect "From Kenya to Kansas" to show up soon in the title of some treacly book about the glorious magnificence that is Obama.

Obama's got it wrong. He's not a "citizen of the world" he's the "center of the world." Blech.

As it volunteers for the Obama campaign

Obama Gaffes abound: check out this article listing some of the most interesting:
http://jraymondwright.blogspot.com/

the last one is a great one, winnie the pooh national security!!! rotflmao

does this mean that someone believes the flooding taking place is the salt water from the oceans?
PleAse read up on The dust Bopwl if you think it was or was not a cycle...it was in large measure man-made because of dumb farming. read and then assess, please.

Fact check Obama but why not fact check both candidates? somehow there is a notion that the press gives Obama a break and is harsh on McCain...
want to match Obama gaffes agAinst those of our leading foreign policy expert? McCain dumber by a long shot.

The dust during the 1930's may have been due to farming practices, but the heat was part of a natural cycle and the greatest in recorded history in the central US. Most of the all-time heat records of this region were set in the "dirty 30's".

Can you explain how your graph shows FALLING sea levels?

The y-axis is labelled "Change in mean sea level" and it is positive since 1998, which means sea levels have been rising since then.

If the chart actually showed mean sea level, you would get a curve coming down in 1994, with the low point at 1998, and increasing since then (a quadratic).

Either you are reading the graph wrong or I am, can you clear it up either way?

Anonymous at 4:24am is an absolute scream for displaying a complete inability to read data while calling Tigerhawk out on the same.

The trend on that chart is indeed upwards, but a trend is a change over time. Since Tigerhawk gave you a two year time frame of 2 years, his trend is demonstratively downwards. Learn how trends work before you start bantering.

And, for the record, since the Cretaceous the seas have been in remarkable declining trend. If not then the "drought stricken" Kansas would still be under an epicontinental sea.

And Gabriel, although the caption is "delta MSL" they mean to show the change in MSL from some arbitrary datum (i.e. zero point). The axis is not a rate of change, it is absolute sea level. The delta is just to remind you that the zero point is arbitrary.

"Obama is correct that over time, coastline are disappearing, but this has been happening for 10,000 years."

Until he's elected, of course.

Of course it's all about him - magic man, the Obamessiah. See - Boston and Beijing, Arctic and Atlantic, Kansas and Kenya - it's BARAK in code!

Not to worry, though, all these minor gobal issues will disappear if The One is elected. All will be sweetness and light.

I'm still not seeing how that graph shows a decline.

If you want to show that the se level has declined, I think a sensible graph would be one that stats with "zero" two years ago and shows what the sea level is now.

To me it looks like that graph is saying that the change in the mean sea level went from 24 mm in 2206 to 30 mm now, and I can't see that it's somehow magically a decrease, unless zero is different for every point.

A graph that needs this much explanation is a very poor one to use to illustrate a point.

At any rate, if those green dots are really averaging lower in 2008 than 2006; well, that's consistent with the sea rising trend for the previous ten years. For example, look just before 1998 to just after, there is an even bigger decrease, but overall it has gone up.

I'm reading all your's comments and I wonder how is it possible nobody even questions the graph of the global sea level. Are you all serious.
So I am expected to believe that today science is able to measure the GLOBAL MEAN SEA LEVEL with the precision > 1mm - please, look at the graph!
Do we also know with the same precision if the continents are rising or falling? - you must agree, that if they are rising faster than the sea level, then there is nothing to worry about!
What else are we able to measure globally! Oh, I forgot. We know the global mean temperature with the 0.1 degree precision for hundreds of millennia back in time! Real miracle!
Congratulations to all the true believers in global warming, I envy you, truly able to believe everything.

Somebody ready to shout with me: "The King is naked and you are all fooled"

and when did you get your degree in Meterology?

the same day, you did!
this way we both have the same right to accept or refuse the theory

The American Midwest is dry not because sea levels fell, but because the land rose. That's right, the U.S. has midriff bulge.

My advice, come to Tavarua and see our coastline disappear before your eyes. Save your pathetic mincing of words and see your worst fears confirmed, OBAMA IS CORRECT.

that is not true that water level is declinig

the least squares is stil trending up!

you lost an election because you are morons