As previously reported, I flew home from Seattle on the first flight this morning. I drove directly to a conference room where I have been ever since and expect to remain for at least another 12 hours. It is hard to believe that just yesterday morning I was standing in front of the first Starbucks ever looking at this view of the harbor and the Olympic Mountains beyond: 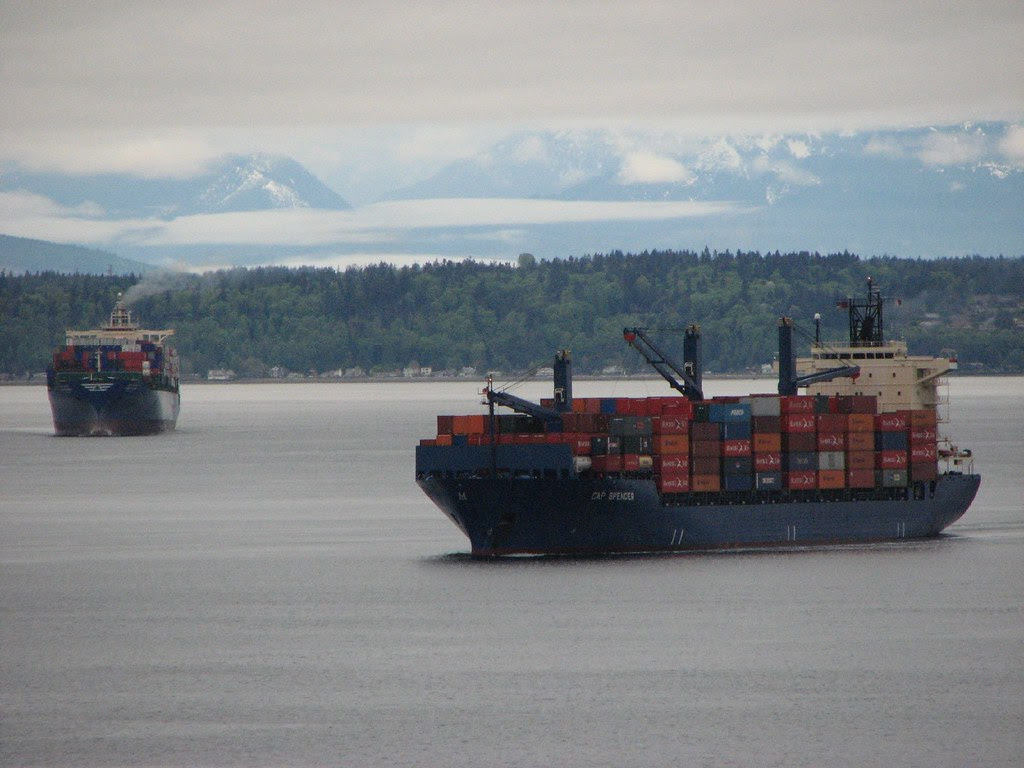 That scene and the aforementioned fountainhead Starbucks were about a mile from my hotel (up near Swedish Hospital), so I walked down the hill and up again all before about 7 am. The streets were essentially empty of cars, so being an Easterner I skipped merrily along with little regard for the status of the pedestrian Walk/Don't Walk signs.

Then I noticed that the few other peds were just standing there waiting for the "Walk" signal to come on even when there was not a car in sight. Not surprisingly, they all looked at me like I was a middle-aged feminist at an Obama rally, so I also stopped violating the crosswalk lights.

When I landed I reported all of this to a friend of mine who claims to hate Seattle -- how can anybody actually hate Seattle? -- and she said "Of course, Seattle is basically just a suburb of Canada."

Like that explained it. Although it sort of does.

Anyway, other than in Washington, DC -- which back in the day raised money by assigning cops in unmarked clothes to write jay-walking tickets -- I've always thought of crosswalk signals as purely advisory. Not the command "Don't Walk," but more like "probably not a good idea to walk, because the cars have a green light." That is certainly the rule in any city in which I have lived or worked, including both New York and Chicago. In Seattle, though, pedestrians comply with crosswalk signals almost to the extent that motorists obey traffic lights. You know, they wait for the light to change even when there is neither a car nor a cop in sight. It is bizarre, and really quite un-American.

Why didn't you let me know you were coming? I coulda bought you real coffee.

I live in Switzerland and the degree to which they obey crossing signals is hilarious. If you cross against the light they stare at you as if to say "anarchist! Rule-breaker!"

I've seen people miss their tram because the signal was on don't walk. Frantically pushing the button as if that would cause the light to change more quickly.

Yet drugs and prostitution are legal. Go figure....

Be care where you ignore the crossing lights. The last I worked there, they were still giving tickets for jaywalking and crossing against the lights in downtown Dallas. Shot one jaywalker dead about 15 years back. Of course, he ran when the officer approached him and he turned out to have some felony warrants.

The rational for the tickets is pretty simple. People crossing against the lights screw up the traffic flow on the crowed, mostly one way streets.

Perhaps the point Tigerhawk was trying to make is that there is a link between typical left coast group think and the residents of Seatle?

I would argue that the main virtue of traffic lights is establishing culpability and/or contributory negligence in pedestrian accidents (see eg. Lee vs. Yellow Cab).

Of course, the general rule of thumb if you are driving a car and hit a pedestrian is that this never looks good to a jury and is therefore to be avoided.

But since accidents do happen, it can be a defense that the idiot was not crossing in the cross walk or did not obey the lights.

Otherwise than that, I generally agree with the Hawk that signs are merely advisory.

As regards Seattlites all I can say is that perhaps its the Scandinavian influnce. There's a reason why it's called "Swedish" hospital.

Back when I started at the University out here in cattle country, we had a standing joke.
Q: Whats the difference between a cow and a college student?
A: The cow will occasionally look before stepping out into traffic.
Kansas is quite not Canada.

"It is bizarre, and really quite un-American."

How dare you question their patriotism?

"When I landed I reported all of this to a friend of mine who claims to hate Seattle -- how can anybody actually hate Seattle? -- and she said "Of course, Seattle is basically just a suburb of Canada."

Sorry: Vancouver is jaywalk city. The first time I went there, in the mid 90s, I could not believe it. Jaywalkers were stepping off the sidewalk into the side of my car. Motorists were expected to stop anytime a pedestrian even looked as if they were going to step on the road.

Not sure about Sweden and Denmark, but here in Norway jaywalking is prevalent. So I''m not sure one can blame the Scandinavian influence.

People behaved that way 30+ years ago when I went to grad school at the UW. It seemed consistent with the local friendliness and civic propriety that I appreciated after studying in Boston--and that I missed upon returning to the East Coast. (But yes, the Seattle police were known to give jaywalking tickets.)

At the time, hawkish Scoop Jackson was in the Senate and Washington Republicans had a governor and an attorney general who would move on to the Senate.

In Seattle, though, pedestrians comply with crosswalk signals almost to the extent that motorists obey traffic lights. You know, they wait for the light to change even when there is neither a car nor a cop in sight. It is bizarre, and really quite un-American.

Hopefully the previous sentence is not meant to be taken literally; if it is so meant, lotsa luck if you try coalition-building... ;-)

TH
I caught the 4pm out of Seattle last night. During my entire three-hour drive from Vancouver, I noticed that at any speed limit, BC and WA drivers made sure to stay at least 0.01 M- or K- PH below it.

I regret to inform you that your "First Starbucks" is not, indeed, the first Starbucks. It is actually Starbucks number 6.

The first Starbucks was in a building, since torn down, about a block south at Virginia and Pike.

Starbucks likes to tell people that the store is the first but it is alas just more corporate bullshit.

Source, besides myself and all my friends who have lived in Seattle a long time, is:

I beg to differ that Vancouver is "jaywalk city". I was there in March, and outside of Germany, I have never seen walk/don't walk signs so religiously obeyed. Very different relationship between the individual and the state. Another observation on the obedience of Washington staters was made as I drove from Seattle to Vancouver. The speed limit on I-5 was 60 mph for much of the way. In the East, that would mean an effective limit of 70. No, it meant 60, since there were people who drove in the left lane at 60, keeping pace with people in the right lane driving 59.

Kind of like our immigration laws. I suppose what's good for the goose, etc.

I wonder if it is sometimes a matter of small town vs big city. That's how we always considered the difference 30+ years ago here in So Cal.
The WWII generation from the Midwest came here to raise families abd were a polite breed - the kind who would never cut in line. If anyone did (which is related to crossing the street against the red light in their minds), they were blasted as "those damn New Yorkers" who had no manners. Now the entire place is citified and the old ways are gone. But don't you tell me they were liberal fascists, now! :)

huh. I was once in an American city where I would wait for the light to turn to "Don't Walk" before I crossed.

I don't know why Seattlites are so religious with the pedestrian signs. There's no remarkable jaywalking enforcement here and, for that matter, very little jaywalking in the sense of crossing at non-crosswalks (corners are "implied crosswalks" under the law)-- except at night when people cross streets that're entirely empty.

I had the impression years ago that Seattle had a higher-than-average car-vs-pedestrian accident rate, but that could be because I was in the University District, where 75% of such incidents involved intoxicated drivers, peds, or both. In any case, Seattle has a pretty strong Pedestrian Right-of-way, being a west-coast city that grew up with the car, not before it. So I just don't know why we wait for the light.

There's even an urban legend floating around Seattle about a candidate for Police Chief who flew in from out of town for his interview, and had been offered the job but wasn't certain he'd take it. That night, from the window of his hotel, he saw some pedestrians standing in the rain at a corner, waiting for the light to change so they could cross an empty street. Upon seeing that, he decided to take the job.

(Don't ask me which chief-- I've heard this story about a dozen times with at least 4 different chiefs.)

Back when I was a student at Cardozo Law, Mayor Giuliani decided to start enforcing jaywalking laws in New York. Unfortunately for him, the very first person nailed with a ticket was a classmate of mine who worked in the Criminal Law Clinic run by Professor Barry Scheck (of O.J. defense fame). He jumped at the chance to defend her, the case was thrown out in about a second (mistake on the ticket or some such), and that ended the experiment.

Giuliani did a hell of a lot to improve this city, but he didn't really know when to stop.

I used to live in Seattle and learned after 2 jay walking tickets to wait for the WALK sign.

If only the local authorities were so zealous in tracking people down for running red lights...

Which now that I think about it, might contribute to the devotion to crosswalks.

Seattle, WA, USA.
Today I have encountered amazing incident. I have never come across that kind of incident in my life so far. I was crossing the road over Zebra crossing; suddenly I heard a sound of police vehicle siren and calling somebody at the same time. I turned back and saw a cop was calling the pedestrians walking on the pavement. Unfortunately all of them have just crossed the road on red light signal. I am the one of them. All of them were surprised and looking at the cop and cop was shouting at them and saying them to come close by. Some of them went to the cop and some of them pretended as nothing had happened and simply passed by. I chose the second option and didn’t look back and kept moving toward my office. I have realized at that time itself that I violated the traffic rule and he is going to give us a ticket. However I didn’t know that rule before. Just because of one incident I saw the day before yesterday help me to escape from the cop. A cop sitting over the motorbike was giving a ticket to a couple. I looked around for the vehicle stopped by thinking that they got pull over, I hate pull over and feel sorry for them whoever get the same, coz that mean your $100-$200 is about to go away from your pocket, but I didn’t see any and thought they might be a friend. Today I realized, they were not a friend, moreover that incident clicked on mind at the time when the cop was calling us. Thank god. I managed to escape somehow and thank that couple…