A totally innocent and unconscious gesture? Yeah, probably, he's not that stupid.

But I read the audience reaction as interpreting it as deliberate, and he certainly gives no signal he didn't mean it.

I could be convinced that political discourse could use more flipping off. I've given all the candidates the finger at some point in the last few months, and I'm not even in the spotlight. 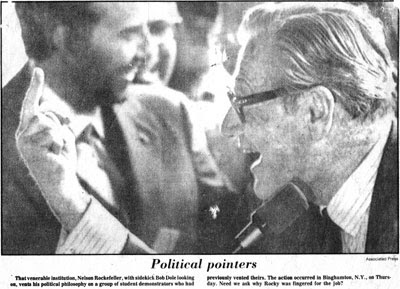 MORE from TigerHawk: I've always loved this picture of Nelson Rockefeller, which ran on front pages all over the country during the 1976 presidential campaign. When asked about it after the fact, my memory is that he claimed he was making a "peace" sign, and that the second finger was obscured behind the first. Politics was more fun when politicians had more fun.

the pause. the smirk. clearly intentional.

a new kind of politics indeed. and one we can do without.

I think, antithaca, that my addition of Nelson Rockefeller's slip-off is proof that Obama's new kind of politics is not new at all!

I remember thinking it was funny when Rockefeller did it, and I think the same thing about Obama.

Obama can make any gesture he wants about Hillary, because the sands of time are running out on her with recent endorsements of Obama. Evidently, the Dem base likes it when he speaks his mind about the difficulty of reaching small town voters (see how the polls have narrowed somewhat in the PA primary, with one even having him in the lead.)

Anything less than a convincing win in PA for Hillary and it is game over. The noise from the rafters will be too much for even a Clinton to stand. It's only a matter of time -- it's like playing out the string in a losing backgammon game.

Man, I hope not. This election is just getting great from my perspective and I've just laid in a fresh supply of beer and peanuts for the weekend fireworks on TV! If Hill wants to keep it up for another couple of weeks or months, I'm all in favor. Obama is toast anyway in the general election, but the human meat tenderizer is doing her job well.

Hillary has become like the drowning victim every lifeguard fears, the one who will flail about in panic, grabbing anything they can to climb up out of the water.

Personally I really think I like Rocky's bird better. He gave it with such joie de vivre that, all these years later, you still have to smile. Now THAT was a bird.

Obama's, on the other hand, was so furtive and so sneaky that I just can't get into it. Its not a bird I can respect.

Can't these damn socialists do ANYTHING right?

Nocomme1, I totally agree. If you're going to flip the bird, do it with a great big grin on your face.

That said, we live in very faux serious times. While there is much to condemn in the 1970s, Jimmy Carter aside the period was a lot less sanctimonious in its political discourse. From the perspective of today in which everything even slightly off-color is to be taken with the utmost seriousness (by both sides), the '70s are looking pretty good.

Well now that you've really got me thinking about great digital communications of the past Johnny Cash comes to mind. He offered up one of the great middle finger displays of all time in a photo taken in 1969 at a performance in San Quentin. Coomunicating not so much a playful joy, instead he conveyed a vicious satisfaction that is every bit as entertaining as Rocky's flip.

I understand that years later he used the photo in a full page ad in a magazine "thanking" Nashville for ignoring his great American Recordings series.

This was truly a flip for the ages.

Now back to Obama's lackluster finger-flick: Since I'm thinking about it it strikes me that the way he orchestrated his finger reveal reminds me of the way he bowls (a topic of momentary newsworthiness a week or two ago.) It was genereally agreed, after seeing this sad display that Senator Obama bowls like a girl. We can now add giving the middle finger to what promises to be a growing list of activities he does in a weak, girlish manner.

It does not bode well.

Now I am done, having said far more about this particular mannerism than I ever thought I would.