Obama and the "Che left"

We have linked a couple of times to the blog stories about Che Guevara flag hanging in a local headquarters of the Obama campaign, and have long wondered why that serial murderer has achieved such iconic status, even considering the historical ignorance of most lefties. There is another question, though, which is why the mainstream media has given the story a complete free pass:

Imagine -- say -- Huckabee campaign volunteers in -- say -- 'Possum Gulch Arkansas, discovered with their offices displaying David Duke (who despite his looney ravings has killed no one, and who -- as far as I know -- has never advocated the nuclear extermination of the U.S. population) posters.

Do you think there might be a media hullabaloo, with the attendant harrumphing and extortion of apologies by Al Sharpton and Jesse Jackson?

Do you think that a campaign spokersperson's lame exculpation of these Duke posters as "inappropriate" would suffice and end the matter?

The great irony, of course, is that Che was no fan of Africans or, for that matter, most other non-Europeans:

Now, what might Ernesto “Che” Guevara himself thought of Obama’s campaign and his campaign workers (volunteers and otherwise)? His own writings and utterings give a strong clue:

"The black is indolent and a dreamer; spending his meager wage on frivolity or drink; the European has a tradition of work and saving,"

“Mexicans are a rabble of illiterate Indians.”

Suffice it to say that we will not hear from Al Sharpton about this.

Now, there are some lefties who get this. I try to pay attention to the propaganda that the schools hand out to our children, and was delighted to see that the December issue of Upfront, which is a magazine produced by The New York Times and distributed to our children via Scholastic, raised this very issue in its cover story: 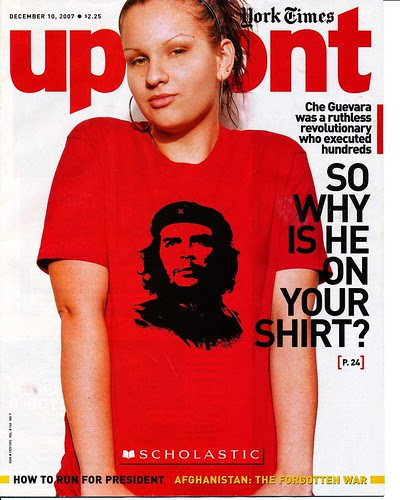 The article itself is pretty harsh, notwithstanding a smidge of apologia:

After Castro came to power in January 1959, Che presided over the prison at La Cabana in Havana, where hundreds of Cuban soldiers, officials, and so-called "enemies of the revolution" were executed, often after little more than show trials. Che himself was said to have done the killing in some cases—including, according to historians, shooting a teenager after the boy protested his father's execution.

Maria Werlau, founder of the Cuba Archive, which collects data on the Cuban revolution, estimated that Che had a role in more than 200 executions.

Castro also appointed Che to several key government posts in banking and industry, and by most accounts the results were disastrous. Under Che's direction, the government nationalized entire industries and expropriated small businesses and homes. Cuba's economy sank, and was propped up for decades by massive subsidies from the Soviet Union.

By the mid 1960s, Soviet officials feared that Che was too eager to support armed uprisings throughout Latin America—no matter the political consequences—and that he might also be favoring Communist China, a Soviet rival. He became a liability to Castro, who pushed him aside.

So, if there are any curious journalists out there with access to Barack Obama, consider asking this question: Have you ever worn a "Che" t-shirt?

It is likely nothing more than an I-identify-1960's-counterculture in 90% of the cases.

The other 10% of progressives considers violent despotism to be a positive.

I am in agreement with AVI that most of the wearers of Che T-shirts do so for counterculture reasons, and are not aware of the racist, bloodthirsty part of Che, but of his "idealist" part. Which brings up the question: can you be idealistic while simultaneously being bloodthirsty and a racist?

Fuser was a loser.

Maybe there is something to be said for dying young. People look less at your record than at their own imaginings.

How long before micheal moore or oliver stone write a movie about CHE?

As usual, AVI is wise- 90% of wearers are clueless. Che looks the part- he's got that archetypal revolutionary look. Nothing more. Extra benefit- Che is an easy name to remember- just 3 letters. (Same principle applies to Cher- another 60s archetype.)