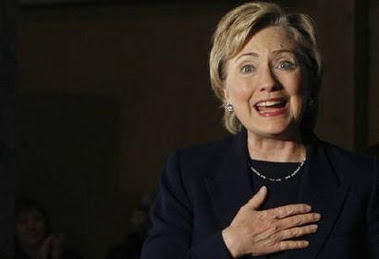 Democratic presidential candidate Senator Hillary Clinton gestures at Amana Colonies in Amana, Iowa November 6, 2007. After a stormy couple of weeks Clinton will attempt to right the ship on Thursday night at a campaign debate with her rivals.

Seriously? That is literally the worst caption I have ever seen on a wire service feed. How does one "gesture at Amana Colonies in Amana, Iowa"? Amana is one of the Amana Colonies. More to the point, how does holding one's hand over one's, er, heart constitute a gesture at a place? If Reuters had any residual shame it would be ashamed.

In any case, I think we all know that TigerHawk readers can do much better than that. Frankly, the ten most humorless women in the Wellesley College class of 1969 could do better than that.

"I was explaining to Barack Obama that this is how you put your hand over your heart during the playing of the National Anthem."


"It wasn't my fault that the Rose Law Firm billing records got lost."


"My media team told me that I had to stop showing too much cleavage."

I did not have sex with that woman, Monica Lewinski

Really, Huma and I are just good friends, I swear.

"Remember that night in the Iowa debates when you came down to my dressing room and you said, "Kid, this ain't your night. We're going for the price on Obama." You remember that? "This ain't your night"! My night! I coulda taken Obama apart! So what happens? He gets the title shot at the Convention and what do I get? A one-way ticket to Massapequa! You was my handler...you shoulda looked out for me a little bit. You shoulda taken care of me just a little bit so I wouldn't have to take them dives for the short-end Hsu money...You don't understand. I coulda had class. I coulda been a contender. I coulda been somebody, instead of a bum, which is what I am....

(Deepest apologies to "On the Waterfront!")

20 years your honor? You gotta be kidding!

"I pledge allegience to me..."

I feel you pain...OMG, bad flashback

bill, you put that wooden stake down right now, i've told you and told you that just isn't funny.

"And this is is where the empty void was created when my soul was removed."

I PLEGE ALLEGENCE TO THE FLAG OF THE NORTH AMERICAN UNION. AND TO THE REPUGNENT FOR WICH IT STANDS ONE NATION UNDER GAIA.WITH REGULATIONS AND NO JUSTICE FOR ANYONE

I note that this is an historic day in Tigerhawk's blog.

Before I get to that, though, allow me to answer some of TH's heartfelt questions. You guys were so busy writing clever captions (Escort81, I almost fell off my chair reading your #3 -- very clever) that you missed that TH asked a few questions along the way.

Yes. It was just an average, boring press-release-type caption. That you did your micro-critique on it is the first clue as to why this is an historic day.

"How does one 'gesture at Amana Colonies in Amana, Iowa'?"

Uh, with a salute, or holding one's hand over one's heart? Your quibble seems to be that they got the locale wrong. Big deal.

"More to the point, how does holding one's hand over one's, er, heart constitute a gesture at a place?"

A. Apparently, your quibble is that they used the word at rather than to? Well, gosh, Hawk, I dunno. If I flip you the bird, am I gesturing at you or to you? Kind of a small quibble there, too, isn't it? (And another valuable clue!)

All of these are further clues why today is an historic day in the continuing evolution of Tigerhawk.blogspot.

Today, Tige, you crossed a line. Up until this morning, I would have bet anything that you were going to be the Last Man Standing.

Think about it? Please?

I think the mere use of an amusing picture in a caption contest does not mean that I have CDS. Indeed, I continue to prefer HRC to any other leading Democrat. More to the point, I would vote for her in the general election over several of the Republicans (Hunter, Tancredo, and Paul), although not any of the leading ones (Giuliani, Thompson, Romney, or McCain).