Here's something you don't see very often on the campuses of major American universities:

A lecture titled "How Abortion Harms Women" is scheduled for 4:30 p.m. Wednesday, April 4, in 16 Robertson Hall.

The talk will be delivered by Charmaine Yoest, vice president for communications at the Family Research Council, a nonprofit lobbying organization that promotes socially conservative views.

Yoest also is project director of the Family, Gender and Tenure Project at the University of Virginia, a nationwide study focused on parental leave policy. She is the author (with Deborah Shaw Lewis) of "Mother in the Middle" and is working on a new book, "A G.I. Bill for Moms: Mothers, the Market and the American Way."

The talk is sponsored by the Woodrow Wilson School of Public and International Affairs and the James Madison Program in American Ideals and Institutions. 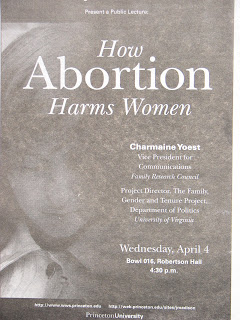 Not only is the Woodrow Wilson school sponsoring this lecture, but the University has taken out quarter page ads in the local townie papers promoting the lecture over a picture of a sad young woman (the ad from Wednesday's Town Topics is at right).

Without getting into an argument about abortion -- I believe it should be lawful under many circumstances, although not for the reasons usually offered by its advocates -- Princeton is a better university for sponsoring this lecture and even promoting it. I suspect that much of the credit for the broadly based sponsorship (beyond the conservative James Madison Program) goes to Anne-Marie Slaughter, the Dean of the Woodrow Wilson School. Dean Slaughter is no conservative -- she blogs at TPM Cafe -- but she has on numerous occasions been willing to buck the orthodox left by inviting and graciously introducing speakers to the right of, well, the orthodox left. By my reckoning, there are far too few avowedly left-of-center academic officials who do as much as Dean Slaughter to recruit and promote speakers who are substantially more conservative than they are. Good job.

As many readers of the Princeton Alumni Weekly have noted, Anne-Marie has come under some fire for inviting members of the Bush administration (inclufing Sec. Rice) to speak on campus. Thankfully, Princeton is not Columbia. Speakers of all stripes can still come on campus and, for the most part, be able to deliver their talk. As Dean of the WWS, she deserves credit for bringing in a broad range of opinions. That's what civilized intellectual discourse is predicated upon.

It's good to know that some still act on the values they profess. Excellent. May her fields increase.

Even women who don't have abortions are hurt by the prevailing attitude that abortion is some sort of palliative thing.

The whole "poor women need abortions" mentality took all the joy out of my pregnancy with my son. The pressures heaped on women who don't want abortions are often enormous. Womena are put through needless trauma by abortion fanatics, all in the name of "choice". Women have had their doctors totally refuse to provide care because they refused to abort!

We need to get rid of the idea that legal abortion only effects women who choose abortion. It hurts all women who love their unborn children.

Wow, a conservative speaker at Princeton? That's like surprising what with Princeton being to the left of most (if not all) affluent New Jersey suburbs.