Cheering the army of Lebanon 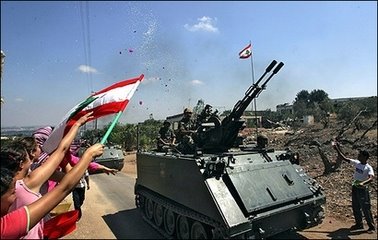 I thought that this picture from AFP had an interesting caption:

Shiite Muslim villagers welcome Lebanese army troops by throwing rice and rose petals on them as they deploy in the southern Lebanese port of Bayadah, near the border with Israel.

Shiite villagers are cheering on an army that did not have the institutional stones to move into southern Lebanon until Israel did a lot of damage, both to Hezbollah and the region's capital stock. It seems to me that this is awfully generous and forgiving of the Shiites who should wonder why the army did not even try to protect them from either Israel or Hezbollah. Perhaps the Shiites' joy is more a reflection of resentment or fear of Hezbollah than a new affection for the national army. It certainly is nice to think so.

Is it a rebuke to Hezbollah or a recognition of Hez influence on the Lebanese Army?

I dunno, but we shouldn't assume the former.

I'll second that emotion, Grump. We're not adept at reading the Arab Street. I recall a small window of time when US troops in Iraq were greeted favorably. It looked promising but quickly faded. Pessimism is always a healthy starting point in evaluting ME developments.

Please note that they appear to be cheering a Self-Propelled Anti-Aircraft gun, presumably to shoot down any airborne terrorists.

AA guns make vicious anti-personnel and light vehicle weapons... remember the infamous German "88" from WWII? That was an AA gun.