The lead editorial in this morning's New York Times is nothing less than astonishing. Largely devoted to bashing President Bush, Vice President Cheney and Senator Lieberman for politicizing yesterday's arrests -- I read their statements as advocating for policies that they doggedly support -- the editorial concludes with this delightful paragraph:

Here is what we want to do in the wake of the arrests in Britain. We want to understand as much as possible about what terrorists were planning. To talk about airport security and how to make it better. To celebrate what worked in the British investigation and discuss how to push these efforts farther. It would be a blessed moment in modern American history if we could do that without turning this into a political game plan.

Of course, when the Times says "we want to understand as much as possible," it literally means to include itself in the "we." No doubt so it can then tell the other side what works, and how we will "push these efforts farther." Do they have any idea how idiotic this editorial is in light of their own program to expose any covert effort, legal or otherwise, that they think people have a "right to know" about?

This is not lost on the Times' readership. Just this morning, Mrs. TigerHawk noticed a big red "LIES" scrawled on the front of the New York Times paper box outside the Starbucks where I write this post. 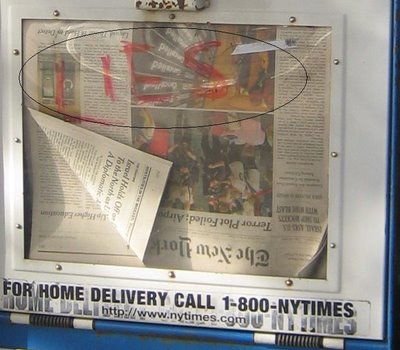 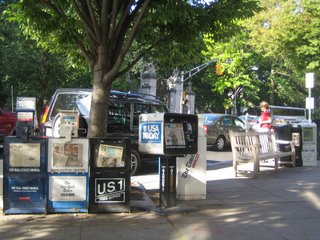 Where is this paper box? Across the street from the main gate of Princeton University, in the heart of the bluest state in the country.

BONUS!: Andy McCarthy notices that the NYT's news reporting rather profoundly confuses cause and effect.

So try to follow this — though, of course, you'll need the high-brow nuance of a State Department careerist or the Council on Foreign Relations to grasp it. In the decade after we left Saddam Hussein in power rather than deposing him, representatives of the umma responded by bombing the World Trade Center (1993), Khobar (1996), the embassies (1998), the U.S.S. Cole (2000); unsuccessfully plotting to blow up much of Manhattan (1993), a bunch of airliners (1994-95), L.A. Int'l Airport (2000) and the U.S.S. The Sullivans (2000); and finally killing almost 3000 of us in suicide hijackings that destroyed the WTC and damaged the Pentagon.

But it was the Iraq war of 2003 that radicalized them.

This is most telling -- it is the Manhattan Liberal Definition of Victory in the War on Terror:

"There is nothing Americans want more than to win the war on terror, to come to a place where people no longer feel it is a fine thing to forfeit their own lives and the lives of innocents in order to make the world notice their anger and frustration."

What the NYTimes wants to do in the wake of this event is "celebrate what worked in the British investigation"?

Are they sure? Even if it turns out that "what worked" includes what the Times considers intrusive surveillance measures including, but not limited to, roving wire-tapping and covert tracking of financial transactions?

And now that these suspects are in custody, will the NYTimes "celebrate" whatever means that the British--or, for that matter, the Pakistani--authorities might now deem fit to take to further unravel this plot and possibly keep another one from hatching?

The public, I think, has a right to know how the Times can possibly square this current editorial stance with prevous efforts to undermine "what worked".

I'm afraid the big red "lies" on the box was probably written by someone who thinks the Times is a mouthpiece for the Israeli government.

Re; the New York Times, wanting to:

"To celebrate what worked in the British investigation and discuss how to push these efforts farther."

Understand what they mean. They did not say "praise" or "thank", they said "celebrate". One definition for "Celebrate" is:

"To make widely known; display: “a determination on the author's part to celebrate... the offenses of another” (William H. Pritchard)."

Yes, the New York Times would love to make British Intelligence means and methods widely known, and openly displayed. That way, in the future, "militants" will stand a better chance of keeping their operations secret and succesful, thereby accomplishing the goal of the NYT editorial staff: Sticking it to The Man.

NYT may soon discover that "what worked in the British investigation" involves a number of actions that offend their tender civil-liberties sensitivities. At which point, they will not print another word about the story. The phrase advocating "push[ing] these efforts further" is thoroughly insincere. If in a month the NYT is editorializing in favor of the US adopting the approach that MI5 actually took, I will (an an act of contrition) subscribe to the Grey Bitch.

Btw, a WSJ editorial today makes much the same point as the first sentence of my comment (and of course makes it much more effectively).

All valid points, but keep in mind:

1) the would-be suicide bombers weren't caught by the Coalition of the Willing forces. It was polic work.
2) the key tip came from a moderate muslim--the kind that could very likely have been put off by "raghead" rants.

Both of your points are very good.

Re #1, I just want the folks doing the police work not to have one hand tied behind their backs, which is in my view what the NYT advocates and, by revealing classified programs, attempts to accomplish.

Re #2, you are absolutely right. May the many muslims who see the terrorists as people perverting Islam carry the day within that religion. (My only arguments with them are theological and, as I've insisted before, those arguments should carried on in a respectful manner.)

Reg #1: If you think that the police have Pashtu and Arabic trained cryptologists on hand to intercept and decode covertly gathered intelligence, I've got oceanfront property to sell to you in Arizona.

Reg #2: If true, and not just a decoy put out by the government to demoralize and mislead the terrorists which is so very possible it approaches the point of likelihood, that's encouraging. Kudos to them.