This is extremely unfair, and I'm ashamed to be posting it... 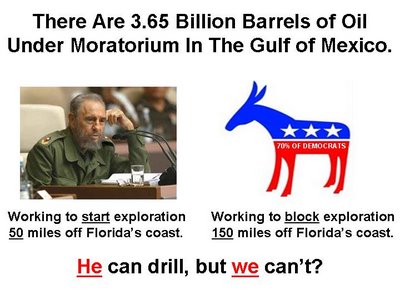 ...but on the other hand, it is Friday afternoon.

If it's accurate, why be ashamed about it?

This is off topic, TH, but do you know that Captain's Quarters is enlisting blogs in the 101st Fighting Keyboardists? They use the chickenhawk as their logo. As many times as that label has been applied to you, . . .

One of the many reasons why it is extremely unfair.

Dawnfire,
There are oil platforms all over the freakin' Gulf of Mexico.
There are/were oilrigs in the North Sea that are vulnerable to all sorts of heavy weather.

And yes, it's not just some of the Democrats that oppose drilling and exploration off the coast of Florida (and in Alaska/ANWR). But is is one of their 'signature' issues.

But our friends, the Chinese will help Fidel drill for oil in Cuba's 'territorial' waters of the Gulf, and most of it will go by large bulk carriers to the "Middle Kingdom".
-David

Castro can incarcerate and torture people for political reasons and we can't?