I can't count that high either

This has to be the most asinine headline of, well, this week. If it weren't for the Associated Press, I would have had no idea that four years had elapsed since the invasion of Iraq. Time flies. 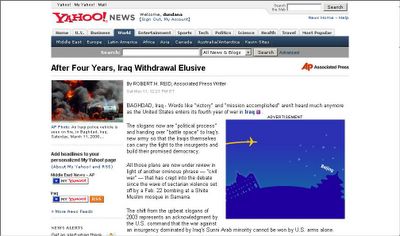 Well, I see in the first paragraph of the lede that they say "as the United States enters its fourth year in Iraq", so they obviously aren't trying to twist facts or anything.

Anyway, would the headline "After Three Years, Iraq Withdrawal Elusive" really be that much better?

I was only accusing them of stupidity, not dissembling.