A "David" rises up 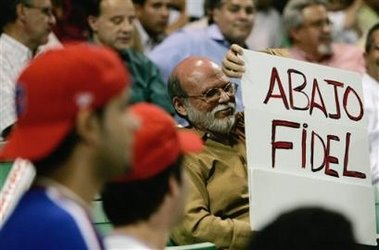 While Cuba played the Netherlands in the World Baseball Classic, a spectator in the stands raised a sign saying: "Down with Fidel," sparking an international incident that escalated Friday with the velocity of a major league fastball.

The image of the man holding the sign behind home plate was beamed live Thursday night to millions of TV viewers — including those in Cuba. The top Cuban official at the game at Hiram Bithorn Stadium in San Juan rushed to confront the man.

Puerto Rican police quickly intervened and took the Cuban official — Angel Iglesias, vice president of Cuba's National Institute of Sports — to a nearby police station, where they lectured him about free speech.

"We explained to him that here the constitutional right to free expression exists and that it is not a crime," police Col. Adalberto Mercado was quoted as saying in El Nuevo Dia, a San Juan daily.


The Cubans apparently took such umbrage at this that they organized demonstrations back in Havana:

Which is more "cowardly": waving a sign that enrages a Communist police state known to assassinate its enemies, or protesting officially that a single homemade sign incidentally broadcast from a foreign country is a "provocation"?

Any regime that is so hard up for legitimacy that it cannot suffer a homemade sign at a baseball game is ultimately doomed. We also know that this fan -- known only to his fans as "Enrique" -- and the Puerto Rican police did the right thing. Congratulations to police Col. Adalberto Mercado, who knew exactly whose rights he was supposed to sustain.

Well, I just thank God that he didn't include a cartoon drawing of Fidel on his sign. Now that would be provacative.

I think these story has to assets:
1. The great coverage it got thanks to the confrontational attitude of the Cuban agent
2. The international coverage the quote from police Col. Adalberto Mercado - "We explained to him that here the constitutional right to free expression exists and that it is not a crime"

This is the best thing since apple pie.

Our own State Department could take lessons from Colonel Mercado.

"We explained to him that here the constitutional right to free expression exists and that it is not a crime," police Col. Adalberto Mercado was quoted as saying in El Nuevo Dia, a San Juan daily.

That´s how things must be taken care of!!! Where ever the freedom of speech is supressed, more effective is the propaganda. And that what Castro or any dictator want. Even the IMAMS are now doing as good as they can (for instance lie like Abu Laban & Co) to keep "their" people away from western way of life. Why? They could start thinking by themselves!!! By the way, Wafa Sultan is my hero. She ROCKS!

I do think the cartoon issue has turned in favor of free speech.
It took a while, but more people are using the cartoons as satire than ever before.

The fact that there are tose in the Muslim dominated world who risk prison and worse to discuss the issue may be having an effect.

Muslims supporting bans are becoming a mockery. The EU will have difficulty enforcing bans on speech when the speech becomes so widespread.