Mocking religion in the European press

Agence-France Presse reports that the BBC will soon report that President Bush said that "God told him to invade Iraq." According to Agence-France Presse, the BBC's source for this is Nabil Shaath, the Palestinian information minister. I kid you not:

Shaath, now the Palestinian information minister, said: "President Bush said to all of us: 'I'm driven with a mission from God.

'God would tell me, 'George, go and fight those terrorists in Afghanistan'.'

"'And now, again, I feel God's words coming to me, 'Go get the Palestinians their state and get the Israelis their security, and get peace in the Middle East.' And by God I'm gonna do it'," said Shaath.

Abbas, who was also at the meeting in the Egyptian resort of Sharm al-Sheikh, recalled how the president told him: "I have a moral and religious obligation.

"So I will get you a Palestinian state."

Some people, of course, see nothing wrong with such an admission. Even I, who churches up a couple of times a month at most and who has never once felt as if I were communing with the Almighty, have no objection to the president characterizing his prayer as talking to God. That's what religious people do, and I for one am damned relieved that he didn't decide to invade Iraq over God's objections.

Of course, the idea that the famously religious president of the United States would actually pray in advance of momentous decisions is apparently so newsworthy to the producers of the BBC and the editors of Agence-France that it is worthy of a documentary on the testimony of an Arab information minister in the first case and this headline and mocking photograph in the second case: 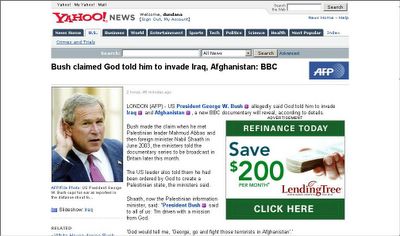 Wouldn't it have been more newsworthy and more troubling if he hadn't prayed?

It's the whole Crusades thing they're playing on. So having his God tell him to invade Muslim countries to fight muslims is going to create quite a stir over there.

I don't mind prayer either, but going to war because God told you to is a little creepy and doesn't sound like the God I know.

What the President has said about his prayer life is that he prays for strength before making major decisions, but he doesn't justify his decisions based on what he perceived God's leading to be. Consequently, I can't imagine that he said what the Palestinian minister quotes him as having said.

From our standpoint, I like how the Book of Common Prayer says it: "Grant to the President of the United States, and to all in authority, wisdom and strength to know and to do thy will. Fill them with the love of truth and righteousness; and make them ever mindful of their calling to serve this people in thy fear." (Morning Prayer, p. 18, 1928 BCP)

Agreed. Episcopalians are reserved in their religion (certainly compared to the President's Southern Methodist tradition), but their liturgy is eloquent.

My blog seems to be the only one that caught that this is an old story that caused a brief media sensation in 2003. And back then, the Palestinians forgot to mention that God told Bush to give them a state. Funny how their memory improved on that point.

At least the Palestinians aren't claiming the state that God told Bush to give them is Israel.

Of course, as some of us well know, the Devil is in the details.

Karl Rove is way ahead of you.

Before I say what I say, let me point out that George Bush is in no way close to perfect.

However, I think the main reason why the far left hates him has to do with the fact that he is religious rather than his policy decisions.

Maybe they are projecting the thing they hate most (God) onto Bush.

George W. Bush believes he is on a divine mission. And, hell, maybe he is. The universe certainly has moved in more mysterious ways. But when a man is charged with the most powerful position in the world, he might oughta wanna check into those voices he's hearing to make sure they're not some sort of reflection of having neoconservative philosophers and policymakers shouting in your ear all day long or that the voices are the echoes of childhood fears and insecurities.

If I stand on the street tomorrow and whack you in the face, then I say, "God told me to." You're going to either whack me in return or get a police officer to let the legal system do the whackin' for you.

Beware men with weapons who say they're on a mission from God.

Here's a link to a ScruHoo piece on the subject of Dispensationalism and the politicians who subscribe to it:

THE LINK IS HERE