From Rosa Parks to Condoleezza Rice 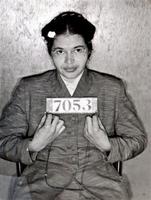 She wasn't the first woman in Birmingham to refuse to give up her seat to a white man, but she was the first to go to jail for it.

History works in strange ways. The cop who tossed Rosa Parks in the clink drew a straight line in history to Condoleezza Rice, born in Birmingham 96 days before Rosa Parks refused to budge.

Secretary of State Condoleezza Rice waves to the crowd before the start of the University of Alabama and University of Tennessee game in Tuscaloosa, Alabama, October 22, 2005. Does Rice want to be president? Even a young girl at a photo opportunity with Rice in her former elementary school wanted the United States' most prominent black Republican to answer the question.

The United States is still far from colorblind. But it is closer to that goal than any other country in the world.

I would love to see Condi run. She would be a great President: she's intelligent, tough, articulate, and principled. The historical effect of her Presidency could be as dramatic as that of Lincoln or Roosevelt.

Minor point, but it was Montgomery, Alabama instead of Birmingham.