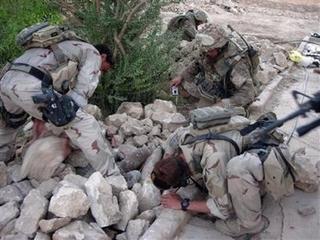 U.S. Marines and soldiers uncover roadside bombs hidden underneath a pile of boulders in the courtyard of a large Sunni mosque in Haditha, Iraq, on Thursday Oct. 6, 2005. Marines said a roadside bomb had struck a humvee near the mosque and trigger wires from the blast site led to the mosque, which also contained dozens of grenades, explosives, and guns hidden near a shrine. No one was injured in the bombing. (AP Photo/Antonio Castaneda)

One is tempted to wonder whether the Muslim "street" will rise up in indignation and rage over this desecration of an Islamic holy space. But then one comes to his senses, and one remembers that Muslim rage over "desecration" is not a function of the use of sacred Islamic objects for profane purposes, but an excuse for anti-Americanism.