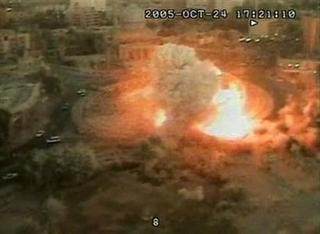 An image taken from a security camera shows an explosion on the roundabout outside the cement wall surrounding the Palestine Hotel compound, bottom right, in Baghdad, Iraq, Monday, Oct. 24, 2005.

How many of the international journalists who were attacked today at the Palestine Hotel believe that if the United States withdrew from Iraq it would "end the war"? Or is it that they know they will only cover the war for so long as the United States remains, thereafter allowing Americans to ignore the war?

How many will report that the terrorists failed to blow up the building, which was their target?