Annals of numismatics: My two cents 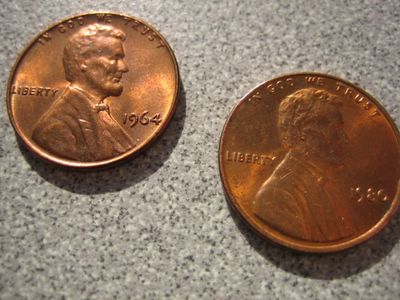 If you don't collect coins, you probably don't think about your pocket change, except perhaps that it is annoying. If you do collect coins, you probably have the mildly obsessive habit of flicking through your change against the very small chance that you will stumble across something of numismatic interest. If you collect coins and wonder where they have been, which is less usual still, the appearance of two Lincoln cents such as these in the same bit of change is almost as fun as finding a "wheatie." Which is saying a piece.

As you probably know from living in the world, the copper luster comes off a circulating cent very quickly -- if people handle it regularly the cent goes dark in just a couple of years. But a lot of Lincoln cents end up in jars and human hands don't touch them for a long time. Cents that aren't fondled stay shiny.

In recent years, "pennies" have lost their utility and circulate less and less -- most people don't spend them, they stash them and then return them to the bank or supermarket in huge wads. There are a lot more shiny pennies around.

These two cents came out of the same bit of change, from the Starbucks in downtown Princeton last week. They have been in circulation 41 and 25 years, respectively, but are still shiny so we are sure that neither has passed through many transactions. The 1964 is particularly unusual, because pennies were still worth something back then. Penny candy actually cost a penny, and just a few of them added up to something worth buying, like a Coke or a comic book or a newspaper. Back in 1964, people spent their pennies.

So where was it all these years?

Not that either of them's going to make you wealthy, but Coined for Money is all about collecting from circulation. Me, I collect ancients, and none of that comes out of pocket change.

I do remember those penny gumball machines and never having more than 20 cents in pennies but now I have thousands because not even candy is a nickel. I'll be one of those dumping my pennies at a bank by december and a flood of barely touched change will hit the market.
Even in the most shiny red mint state condition your two cents are worth about 20-30 cents each.