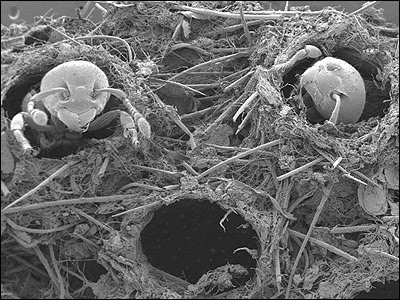 A fierce species of Amazonian ant has been seen building elaborate traps on which hapless prey are stretched like medieval torture victims, before being slowly hacked to pieces.

With cunning and patience, Allomerus decemarticulatus worker-ants cut hairs from the stem of the plant they inhabit, and use the tiny fibres to build a spongy snare, Nature magazine reports.

This ingenious feat of engineering has only ever been observed in one other species of related ant, French researchers say.

The ants cut hairs to clear a path under the plant stem, while leaving some hairs standing to form "pillars" on top of which the lethal platform will sit.

Using the plant hairs they have harvested, the ants weave the platform itself, which is bound together and strengthened using a special fungus.

When the ants have completed the chamber they puncture holes all along its surface, each just big enough to poke their heads through.

Then, hundreds of worker ants climb into the chamber and wait for an unfortunate victim.

Some of these "victims" can be quite large, at least relative to the ants in question: 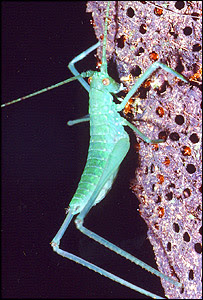 The when the prey steps through a whole, the ant in waiting grabs its leg. Then zillions of workers swarm out and bite the trapped food until it is immobolized, at which point it is dismembered and carried into the nest. 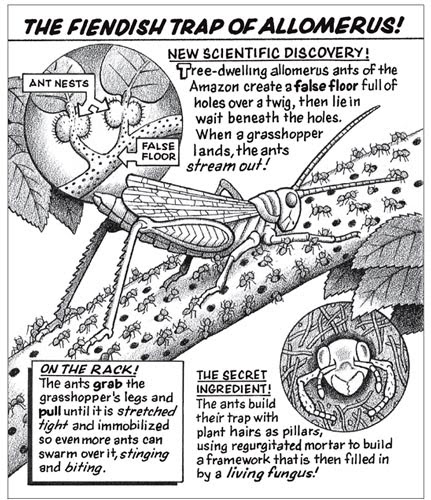 UPDATE: The TigerHawk Sister, an actual entomologist, has more in the comments. Among other things, I think she called me a "temporary sperm storage bag."

"A fierce species of Amazonian ant has been seen building elaborate traps on which hapless prey are stretched like medieval torture victims, before being slowly hacked to pieces."

This is not unlike my wife when I arrive home for dinner...

This comment has been removed by a blog administrator.

Reminds me a bit of the Mainstream Media.

Just more data to support my contention that ants are the most highly evolved animals (yes, including humans). Eusociality is the optimum in reproductive evolution. Males' only function is as temporary sperm storage bags. Etc.

Another of my favorite instances of ant cooperation is the use of larvae by adult weaver ants (Australia) to sew leaves together on trees to form arboreal nests. Only larvae can produce silk, which in most insect species is used just for cocoon formation at pupation. It's cool to me that the adults use silk for their own purposes. Then there are replete honey pot worker ants, which spend most of their lives with giant distended abdomens filled with sugary goo, hanging from chamber walls deep under the ground, as storage vessels for lean times (they live in the desert). Well, I could go on and on. As with the gliding ants, I am delighted by this new discovery but not too surprised.

It is a tragedy that there are countless such discoveries that will never be made because of the deforestation driven by economies relying unsustainably on subsistence and commercial agriculture in these nutrient-poor environments.