Tim Russert set the hook right into one of Ted Kennedy's enormous jowls this morning, but utterly failed to reel him in, even as Kennedy cut off the legs of the Cold Feet Democrats who voted for the war and now wish they hadn't.

I had been getting increasingly annoyed as Russert gave Kennedy the opportunity for long uninterrupted bloviating monologues on a wide range of topics. The first 15 minutes of "Meet the Press" was an extended campaign commercial, until Russert put up a "statement that was talked about during the war":

We know [Iraq is] developing unmanned vehicles, capable of delivering chemical and biological warfare agents ... all U.S. intelligence experts agree that they are seeking nuclear weapons. There is little question that Saddam Hussein wants to develop them. ...In the wake of September 11th, who among us can say with any certainty, to anybody, that those weapons might not be used against our troops or against allies in the region? Who can say that this master of miscalculation will not develop a weapon of mass destruction even greater -- a nuclear weapon. ...

Here's how the off-the-TiVo transcript reads:

Russert: Are those the statements you're concerned about?

Kennedy: Well, I am concerned about it, and that's why I believe that the actions that were taken by Harry Ried in the Senate last week, when effectively he said that we are going to get to the bottom of this investigation -- this has been kicked along by the Intelligence Commitee, by Pat Roberts, for over two years, and Harry Ried did more in two hours than that Intelligence Committee has done in two years. And the American people are going to get this information and it is important that they get this information about how intelligence was misused because of the current situation. It's important to know where we've been but its important to know where we are today because we are facing serious challenges over in Iran, we're facing serious challenges in North Korea, and we cannot have a government that is going to manipulate intelligence information. We've got to get to the bottom of it. And that is what the Democrats stood for on the floor of the United States Senate last week. That was a bold stroke, one that has the overwhelming support of the American people. It is about time that they got the facts on it, they haven't got them to date, they deserve them and they'll get them.

Russert: But Senator, what the Democrats stood for on the floor of the Senate in 2002, let me show you who said what I just read: John Kerry, your candidate for president. He was talking about a nuclear threat from Saddam Hussein. Hillary Clinton voted for the war. John Edwards, Joe Lieberman, John Kerry. Democrats said the same things about Saddam Hussein. You yourself said quote "Saddam is dangerous, he's got dangerous weapons." It wasn't just the Bush White House. 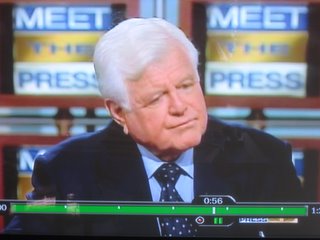 Kennedy (with a stricken look): The fact is -- and I voted against the war -- because every military leader, highly decorated military leader, said it was foolish to have a military intervention. General Hoar, with the Marines, General Hoar who has more silver stars than you could possibly count, said that if we go into Baghdad, it will look like the last five minutes of Private Ryan. So, we know we had enough information to vote against it, I believe.

The Democrats who voted for the war are focusing on the idea that the Bush administration "manipulated" the intelligence findings running up to the war, because that is the only way they can both denounce the war as Republican folly and absolve themselves of responsibility. Hanging off Russert's hook, Ted Kennedy made it clear that "we had enough information" to vote against the war ex-ante, effectively denouncing the very idea that pro-war Democrats can rely on the excuse that they "were misled." Russert, to his great discredit as an interviewer, utterly failed to reel in Kennedy on his admission and its obvious implications for the Cold Feet Democrats: that those who voted for the war in 2002 cannot honestly claim that they were "misled" into voting for it.

The ugly truth is that some of the Cold Feet Democrats voted for the Iraq war because it was the right thing to do (Lieberman and probably Hillary Clinton), and some did so because they thought it essential to their political future (quite obviously John Kerry). Now that the war has become unpopular in general and verily toxic among Democratic activists, the former group takes refuge in the means by which the Bush administration -- they carefully avoid criticizing the military -- has conducted the war. There is unfortunately enough validity in this argument that Cold Feeters who make the competence argument -- such as HRC -- are not entirely dishonest. The latter group -- Cold Feeters such as John Kerry who supported the war out of rank political expediency -- is pushing the idea that they were deceived, which argument is, as Ted Kennedy made clear, totally disingenuous.

And, by the way, as highly decorated as General Hoar may be, he was obviously quite wrong in his prediction that the occupation of Baghdad would look anything like any part of "Saving Private Ryan." The total Coalition casualties in all of Iraq in two and a half years of war barely exceed the Allied casualties on June 6, 1944, the single opening day of the Normandy invasion.

John Adams must be rolling over in his grave to see the Great State of MA represented by losers like Kennedy and Kerry.

As for that particular General having "more silver stars than you can count"... (a) who cares, and (b) I'll bet your average Kindergardener can count them (mine could, anyway).

Here are the figures from the link you provided.

The breakdown of US casualties was 1465 dead, 3184 wounded, 1928 missing and 26 captured. Of the total US figure, 2499 casualties were from the US airborne troops (238 of them being deaths). The casualties at Utah Beach were relatively light: 197, including 60 missing. However, the US 1st and 29th Divisions together suffered around 2000 casualties at Omaha Beach.

General Hoar was probably relying on the then-known facts, e.g. that the Iraqi armed forces under Saddam were large and well-armed, even just taking into account conventional weapons. That they were also ill-led, malcontent, and not very disposed to fight for the regime was not too obvious until the invasion was under weigh, albeit such an assessment may have been promulgated after driving them from Kuwait - but that hed been a decade earlier.

I don't pretend to know on what information the General may have based such a statement, but I do remember there was widespread anxiety about the liklihood that Coalition forces would encounter chemical weapons, if not other WMD. There was even a report on CBS 60 Minutes which fretted over the near certainty that unnecessary casualities would result due to the inferior quality of the protective suits issued by the military. Of course Kennedy now confidentally asserts there was never any need for such worry. And yet somehow logic compells him to trot out General Hoar's discredited prediction.

What you learn from the trap laid for Sen. Kennedy is that the Dems rely on short-term memory and for the press to not to point out the historical memory.

Here's something interesting re Kennedy's comment of "General Hoar who has more silver stars than you could possibly count":

So how high does Ted Kennedy think we can count to?

In response to the question posed by Tony above...

So how high does Ted Kennedy think we can count to?

Must be old Ted can count all the way up to five and anything less than that is all the rest of us can manage.

"General Hoar ... said that if we go into Baghdad, it will look like the last five minutes of Private Ryan. So, we know we had enough information to vote against it, I believe."

But he was WRONG.. wasnt he!

It wasnt until the 'insurgents' found out what good coverage they got on western MSM that the crap hit the fan!

The thing that amazes me about the Private Ryan comment is that, as I remember it:

The bleeding-heart-to-the-point-of-cowardice translator finds the courage to stand his ground against a German soldier, and finally kills him, which cows another half-dozen Germans into surrender.

Private Ryan, given good cause and an Official Excuse to back out, insists on fighting to honor his dead brothers.

I admit, I have a lot of trouble understanding how that supports Kennedy's point.

Someone needs to tell Senators Kennedy, Kerry, HRC...not everything is an X-File.

As I understand Dem logic being wrong about sonething is the same as lying. i.e., the still claimed that Bush lied after it was clear the intel was wrong. Therfore General Hoar was lying.

Leave it to Teddy and his leftist buddies to learn their history lessons from Hollywood. I wonder if John Kerry met up with Marlon Brando during his Christmas in Cambodia?