There was so much wrong with this Guinness, I don't know where to start. The temperature was too high -- the bartender thought it was meant to be drunk "warm" -- and the head -- OMG, she poured it in like 15 seconds instead of the requisite 119 (123 in certain circles). But really, the Coors Light glass? That was the last straw, so I returned the beer quite politely and asked for another Sierra Nevada. 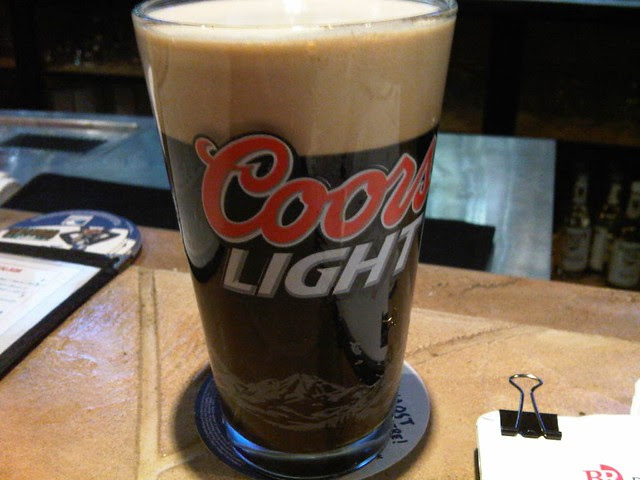 When I do have a beer, I nornally drink heavier ones, like Guiness. However, I did have a Coor Light the other day - what a shock.

The best Guiness I ever had was in a small pub just south of Galway.

It was not served in a Coors Light glass.

It's a common myth that the Brits (and Irish) drink their beer "warm." They generally drink it at cellar temperature, which is 45-50 degrees. Granted, still not as cold as many Americans want.

Mass market US beers, on the other hand, are so weak and bland that you won't hurt their taste by overchilling them.

And no, I'm not a Euro-beer snob. I live in the Pacific Northwest, where we have plenty of local breweries. By preference I will drink a local beer or ale, which Coors or Budweiser is not.

Whenever I want to be reminded of the difference between elitists and normal people, I order a Coors Light in any San Francisco bar. The reaction is always the same.

I appreciate the impulse, Anon, but if you are implying that Guinness is the choice of "elitists" I beg to differ. It is a working man's beer the world over. Only in the United States do we consider it in any way exotic.

On the substance, what do Coors Light and sex in a canoe have in common?

Answer: They are both f*cking close to water.

The only times I buy light-flavored beer is when working outdoors, taking it as an equivalent to "fun water." But even then, I'll buy Rolling Rock over Coors.

As to that glass, only the temperature would bother me.