The absolute number of Americans living in poverty today is at the highest level ever recorded. Short commentary follows. 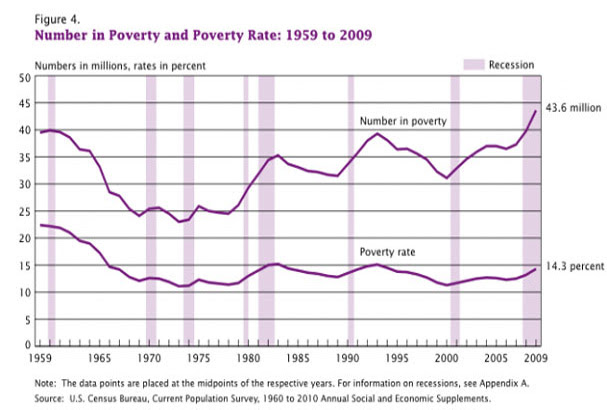 In all likelihood, the data will eventually show that the disparity between "rich" and "poor" in assets and income that widened during the last thirty years will have narrowed considerably during the last three years because of massive layoffs in financial services and allied businesses (such as Big Law) and big declines in the stock and residential real estate markets. If that indeed happened concurrently with the absolute increase in poverty, will that finally discredit the ridiculous yet bizarrely popular myth that inequality is a cause of poverty? I'm not holding my breath.

I've always been bewildered by this obsession in our country with income gap. Rich people become rich through huge success in innovation, investing or business. These are all great things for America and lead to higher employment. In other words, there is nothing better for the lower echelon of society than a big income gap, since those occur during creative outbursts of national business energy. A declining income gap would of course be a contrary indicator, and a bad thing.

As my old man always told me, "Don't worry about what the other guy makes, only worry about what you make". A good rule for personal life, but not for our national life. There, I want to see a big income gap.

The situation doesn't surprise me. Leftists have attacked one American industry after another for years. Meanwhile, American universities sold (for the price of college tuition) most of our technical knowledge to students from other countries.

Are journalists EVER going to familiarize themselves with statistics? The author states that poverty is at the highest "level", when, according to his own graphic, the rate of poverty in the US has been essentially the same for decades.

Despite, of course, trillions spent on the "WAR on Poverty".

McT ... they know, it just doesn't fit the agent. The rate is in the relevant range of the last 40 or so years, but the pure number went up. OK fine ... what was the US population in '59, and extrapolate it to today's.

... and I'm with Anon ... I will say a few things ... people in 'poverty' might want to be there (they can collect all sorts of stuff from our Uncle Sam), or they're there because they've spent a lifetime NOT preparing. We've created a great incentive to look, at least on paper, as if you're disadvantaged. Free everything must be nice.

according to his own graphic, the rate of poverty in the US has been essentially the same for decades. Despite, of course, trillions spent on the "WAR on Poverty".

That's because the definition of poverty is rigged. It's the lowest quintile of income earners, or some fixed amount of standard deviation from the mean, or something very similar to those two. Thus, no matter how good their standard of living is in an objective sense, you can't eliminate them no matter how much money you spend because by definition there must always be a lowest quintile. Indeed, even if you gave all the money the rich have to the poor, that would just make the rich the new lowest quintile.

It's interesting that the big drop in the poverty rate at the beginning of this chart took place *before* Great Society programs kicked in. My guess is that it had less to do with government policies one way or the other than with the long-term postwar economic boom.

I guess that explains the government's war on global wealth!!